Sometimes a court case comes along that captures the attention of America, either because of how terrible it is, or how silly it is. OJ was the case of the century in the 1900’s. We had the Hot Coffee case that the media ran away with and influenced the public about, without going into the real details surrounding the case. We have courtroom drama shows, courtroom drama movies.

We love the law, but we we love it when people break the law and do bad things to have this drama.

I Love You, Now Die looks at a recent case of which you most definitely heard about and have a strong reaction to. Two teens, one dead boy. Suicide. And on his phone, dozens of text messages for him to kill himself from his girlfriend, including maybe telling him to get back into his truck which was how he eventually went out, when he was having second thoughts.

Have you heard it? I bet you have. And from that, we were all thinking the same thing. “That Bitch!”

However, media blurbs and unresearched news might be the real story here. 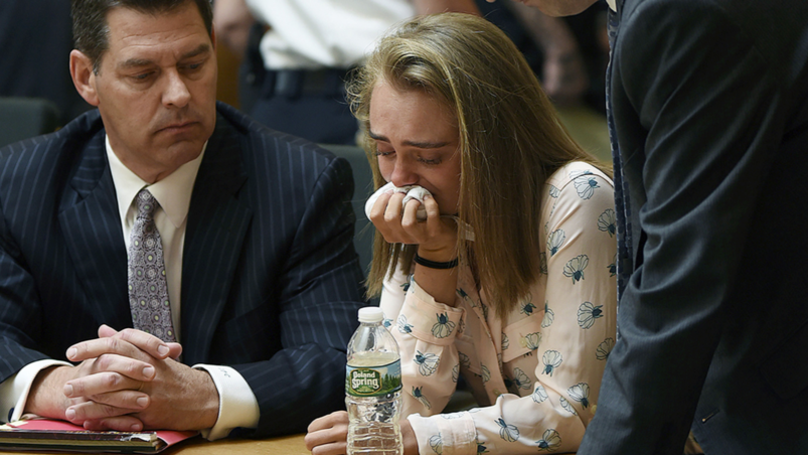 That’s the woman who you are calling a bitch.

The 24/7 news media cycle is constantly going, constantly searching for clicks and ad revenue, because the newspaper is dying. So anything to get people to click your site is great, anything juicy or disturbing. And yes, the facts about this case are disturbing. The outcome of the death is disturbing.

But what about the history? What about the years before that July 12th, 2014 moment? What is the greater context?

This documentary is in 2 parts, overall over two hours long. The first part goes over the case against Michelle Carter, what was argued in court, the texts, and all of that. The second part focuses on the defense, using the same evidence, the same laws, to argue something very different. And of course the second part includes verdicts, reasoning, and the appeals.

And you know what? This documentary reminded me about Hot Coffee. I went into Hot Coffee thinking one thing, and left with a new opinion. Documentaries that can effectually change your opinions are a magical lamp of desire. Most of the time, I either watch because I agree, or disagree and hate it the whole time.

In attempts to remain unbiased, they didn’t have a voiceover reading texts, adding inflections or sarcasm or anything. So there is a lot of reading of the text messages between Carter and the boyfriend and other people involved.

The only reason I am not giving it a 4/4 is because in their attempts to stay unbiased, they got really biased at parts. During some of the text exchanges, they had somewhat scary background images. The faces of the couples distorted, with lots of distortion and strange background music. It made those aspects feel clearly a lot more “evil” versus the more generic backgrounds used throughout most of it.

This documentary does such an amazing job of showing both sides equally and fairly, it is a bit sad to see it mess up a few times on those details.

Either way, this is an important documentary, and one that reminds us to check things out and not just take a shitty news article for face value.

3 out of 4.
Tags:3 out of 4, Crime, Documentary, I Love You, I Love You Now Die, The Commonwealth v. Michelle Carter