How To Change The World will premier in theaters nationwide on September 9, 2015, as a part of Fathom Events.

If there is one thing every kid wants to do, it is to change the world. Or rule it, which would definitely be a type of change. So going to see a documentary called How To Change The World should be something on everyone’s radar. What can be better than a step by step guide that anyone can follow?!

Well, things aren’t that simple. And the documentary in question isn’t meant to be a vague guide, but instead tells the story of how a group of scientists, journalists, free thinkers, and all around hippies, accidentally started one of the largest environmental movements in the world today: Greenpeace.

Now now, calm your britches. Greenpeace is an organization with a lot of controversy and strong opinions. People seem to either love them or hate them, rarely maintaining a neutral stance on the group.

Despite that, the documentary can still be seen as an eye-opener. You see, the founders realized that the media would be important in order for any of their protests to matter. So they filmed everything they did. Every meeting, every decision, every protest in action, every run in with the law. They knew they needed documentation, and How To Change The World shows footage from their most famous early moments, showing how the group was made and eventually how they began to fracture. 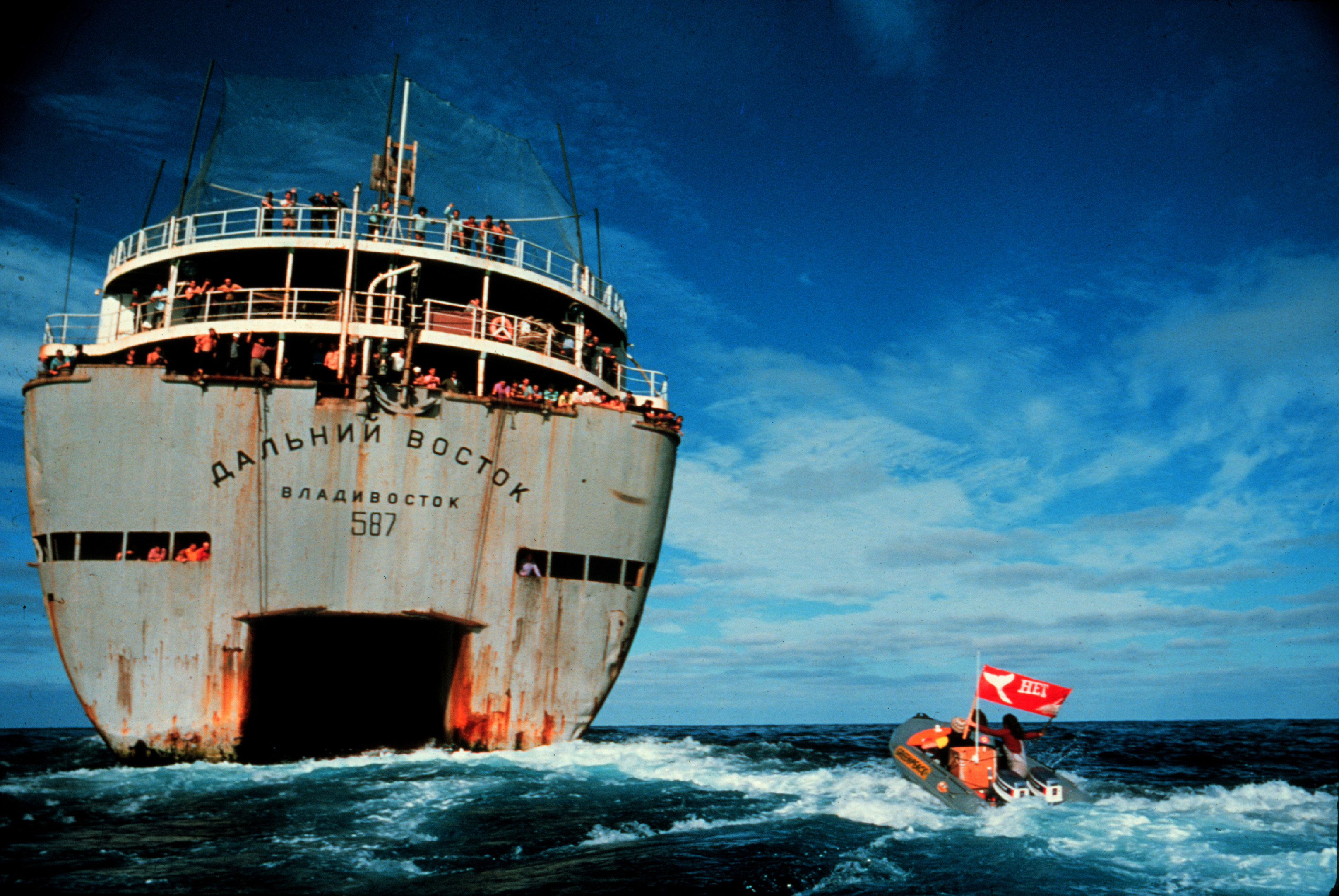 This picture is a metaphor, but also something that really happened.

Their basic leader early on is the now deceased Bob Hunter, a journalist from Vancouver. He was the one who kept up their early news presence. Their first goal, as a group of friends, was to sail a Canadian boat from Vancouver to Amchitka, Alaska to protest a nuclear bomb test. They would go straight to the testing site on the boat and just exist offshore, daring the US to set the bomb off. Their boat of course was named Greenpeace.

After that, their next main goal was to help Save The Whales. Yes, they made the phrase. Their goal was to find Russian vessels that were harvesting the whales off of the coast of California, and again, put themselves in the way of their harpoons, hoping to save the whales by risking their own lives. A bold move that definitely put them on the map, allowing them to then protest the clubbing of baby seals and more environmental issues.

Other notable members include Patrick Moore, who has since defected from the group and actively goes against their protests, and Paul Watson, that asshole from Whale Wars who uses ridiculously aggressive tactics because he thinks he is better than other people. I should note, I felt really bad for Moore, because he clearly had good ideas but no one else in the group would listen to him. It makes sense that he hates them now. But then I also found out he is a climate change denier suddenly, so all good faith was quickly lost.

How To Change The World ended up having incredible depth. I was amazed at the amount of footage that actually existed on these first few voyages and the seal clips. And the footage isn’t edited down to make it easy on the eyes. You will see slaughtered whales and see baby seals getting clubbed. It makes its points by showing you the reality.

In all honesty, the organization started off with great ideas and goals and this documentary makes you feel like you are there the whole time with them. But once they began to fracture and have offices around the world, things got out of hand and they have gained a lot worse press.

The main thing I think lacking from this documentary would be addressing some of their controversies that are more modern and in greater detail. The documentary is only about 1:45 in length, and it doesn’t go into the members feuding and other smaller problems until the last 15 minutes, the majority being about their first few voyages. It has a lot of interesting information and will definitely do its job on teaching about Greenpeace.

However, I just wanted more, damn it.

3 out of 4.
Tags:3 out of 4, Bob Hunter, Documentary, How To Change The World, Patrick Moore, Paul Watson