I have written before about Holiday or make believe character movies, and how I hate it when they contradict with the real world that they are presumably set in. I am looking at you The Tooth Fairy.

Despite everyone knowing there is no Easter Bunny in the real real world, Hop does a pretty good job of not contradicting itself. Mostly. So I will give it a point for that. I do not recall a single adult uttering “Easter Bunny? Preposterous!” and slamming their first down. Because clearly if one existed, people wouldn’t question it, because there’d be damn easter eggs everywhere that they didn’t hide. Must. Stop. Rant. 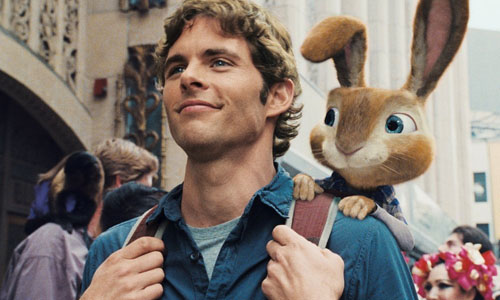 Because I have a way more important topic to rant about.

The Easter Bunny, or E.B. (Russell Brand) doesn’t want to do the job. He wants to be a drummer in Hollywood. His dad, the current easter bunny (Hugh Laurie…who is named E.B.’s dad. What??) So a few days before Easter, he escapes from their hideout (On the Easter Island, of course), where they make all the candy and eggs for Easter (because that is a thing people think Easter Bunnies do?). He escapes to LA where he gets HIT BY A CAR!

Driven by James Marsden, who is a slacker living at home with his folks. His family (dad of Gary Cole, younger(?) sister of Kaley Cuoco) thinks he needs to get a real job. And move out. I was confused, because it seemed like Kaley still lived at home possibly. Eventually Marsden agrees to help the bunny out, despite causing problems, and get him an audition for David Hasselhoff (On Hoff Knows Talent) to be a big star!

Oh yeah, and the factory for Easter is fueled by an army of “chicks”, whereas the second in command (Hank Azaria) has dreams of being the “Easter Bunny”. Despite the fact that E.B. has no interest in being the head honcho, the dad is stubborn, and laughs away all of the suggestions from the chick to become the next guy in charge. Instead he sends the Pink Berets (highly trained bunnies) to capture his son.

There is also a subplot of James figuring out what he wants to do with his life, become the first human Easter Bunny. 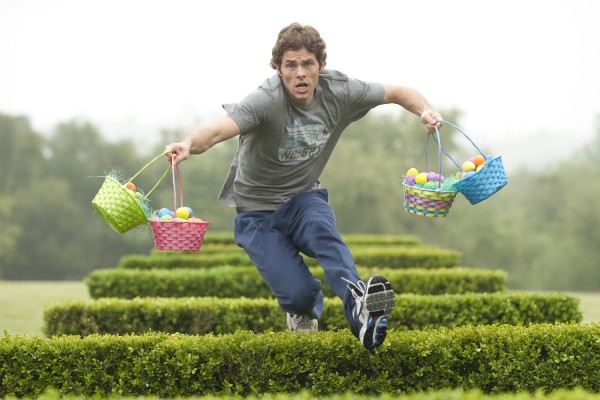 Now this picture should make a lot more sense.

I seriously am about to spoil some thing. I cant figure out how to hide it so I will just say it. Yes, at the end they stop the chick and save the day. E.B. and James agree to be co-Easter Bunnies, more fun for the two.

So uhh. James gets to live his dream, and E.B. gave up his?

But more importantly, WHAT THE FUCK KIDS MOVIE? This is a horrible main plotline. Horrible horrible. Just typing this seems silly, but clearly this movie is anti-chick. These chicks, who must live in Neverland because they never go to Chickens, have to work in a factory all year (like Santa Elves) making candy apparently? There is only like 5 bunnies in the whole place from what I seen, the head honcho, his son, and his body guard unit (who never spoke. They should have spoke). And they don’t do shit but once a day, if that.

But for the head bunny to call the chick more or less dumb for wanting to advance to the head master position was horrible. It made it seem like a Kingdom, and not a business. It gave the message that those born as chicks can never advance to any higher sort of existance, but must stay there and work. Sure later, when he did take over (after he forced it) he replaced candy with worms and stuff (because Bunnies like candy, so of course a chick would put in food they like? Another dumb correlation). But by then he was probably just pissed off at how much of an asshole the dad was being.

Especially as one character noted it made more since for a chick/chicken to be handing out eggs than a bunny. AND NOT TO MENTION that at the end JAMES MARSDEN, A HUMAN, gets to be an Easter Bunny, when all the other chicks get put back in their rightful place.

Again. What. The. Fuck. These type of matters shouldn’t be brushed aside either because it is just a kids movie. This is the same shit they tried to sell us in Cars/Cars 2.