I have written many times about how disappointing DreamWorks has been in the animation department. The TL;DR is that all of their movies are terrible, bad, or average, unless they involve Training Dragons or Fighting Pandas. They have two good series right now, but everything else has been pretty bunt or miss. I liked Shrek too, sure, but not really anything post Shrek in that series.

Going in to see Home, I was already biased. Mostly because DreamWorks made a short called Almost Home that wasn’t too exciting. It premiered last year, and was kind of shitty. They showed it before at least two of their movies too, so I had to see it a second time and go “Yep, still don’t like it.” So when I found out it was a tiny prologue to a movie coming out this year, I of course was not excited.

I definitely wasn’t excited when I found out about the voice casting. Well, one person was exciting. The rest seemed to be the now standard big names for big names sake in order to make money.

Seriously. This movie has almost nothing going for it ahead of time. 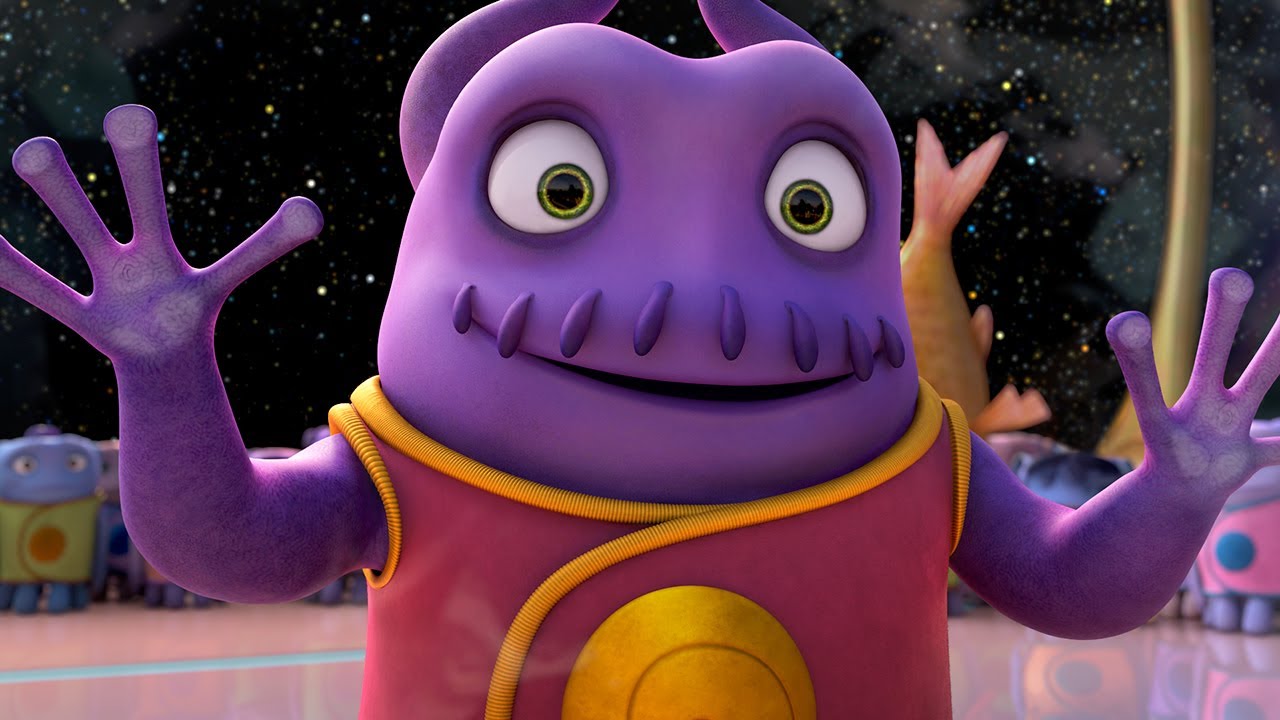 Can’t even give me a full mustache to be excited about.

The Boovs are known for only a few things: Their color changing based on mood, their tentacles, and their ability to run away. They are great runners. They run from any threat and go based on probability. If something has less than a 50% chance of a success, the run. Captain Smeck (Steve Martin) is their leader because he is the smartest and best at running away. He was even able to get them to run away from the Grok (Grog? I really don’t remember) alien race. But now they are running from this big bad enemy, and they think they have finally found a place to hide.

So they put all the Humans in one big colony in Australia, leaving the rest of the planet for themselves! Unlikeable Oh (Jim Parsons) isn’t the same as all the Boov. He likes other things so he is weird and makes many mistakes. Including inviting the entire galaxy to his new apartment warming party. Including the evil alien race by accident. Whoops. So he is now on the run, having a big bad mistake.

And while on the run, he runs into Tip (Rihanna), short for Gratuity. Yeah. Apparently they were able to get every human except for one little (old? hard to tell) girl. She says middle school, but her voice screams 20 year old. She wants to find her mom (Jennifer Lopez), he just wants to escape and make things better.

So they work together! Traveling with a slushie based car hover craft and running away from everyone else, who also wants to run away. Especially when the big baddies come along too.

Jeez. What a mess they have made. Also there is Kyle (Matt Jones). Fuck you, Kyle. 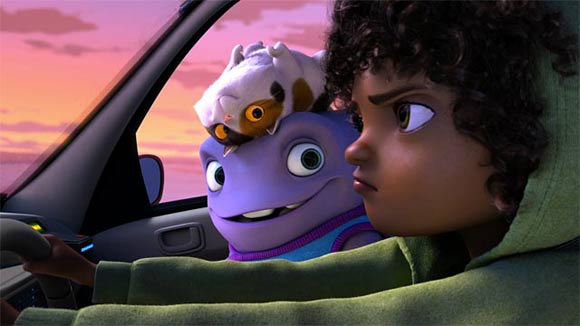 Tip was named as such after her friends gave her a helpful hint on living life to the fullest.

Yeesh. So Rihanna didn’t fit that character at all. DreamWorks tends to have that issue though. The Croods was 100% awkward because of Voice Choices. So Rihanna made her girl sound way too old. Jim Parsons worked as our main character. It was pretty great. Jennifer Lopez was pointless as crap. She had very few lines, overall maybe three scenes technically. No reason to have a big name in such a pointless role. (Or, maybe that is the best place for a big role?). Martin did pretty good at his Captain, reminding me a bit of Sgt. Bilko, but more shitty of a character. And I am actually happy for Matt Jones, getting to be top listed as the only other character with any significant lines.

It is quite obvious why they brought in Rihanna though. She made a whole damn CD for this movie. Half the songs were song by her, J-Lo threw in one as well. And they all sounded kind of the same as a result. It became accidentally funny by the end, hearing the same different song, one after another.

And finally, I got really annoyed by some minor inconsistencies. They had some poor plot decisions to make the movie move forward, their reason for Tip not getting taken was silly, and then other small things like, taking all the pointless toilets away from the area, and then still having houses with toilets. Just minor, rookie movies at the end.

But guess what. This movie was actually still entertaining. It was funny on numerous occasions, and you really do grow to like Oh and Tip by the end. Odd voices aside, Tip is great in that she is a strong independent black woman who don’t need no Boov in her life, for the most part.

The animation was also spectacular at times. Dreamworks has always tended to make some pretty movies, and this one is no exception.

I am able to see through all the poor choices that this movie made in production and with the plot. The movie itself, as an experience, visually and character wise, is much better than the cover would make you seem. Yay for a movie changing my mind! Well done DreamWorks. Now I don’t feel so bad about having to wait so long to see Inside Out.