I am pretty sure I heard about Hit and Run first from Dax Shepard and Kristen Bell. Do you know them? They have been a couple for a few years, since they met on When In Rome. Both very delightful people that make me laugh. Well they wanted to do a movie together, damn it, where they can be in love on screen too! 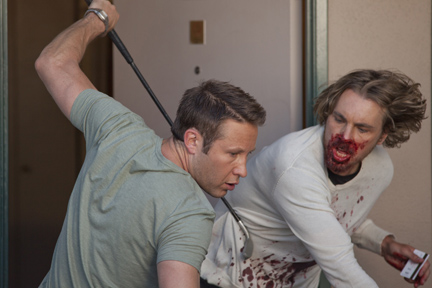 Annie (Bell) and Charles Bronson (Shepard) are living in the middle of no where California. They have been dating for a year, but they really do love each other so much. Heck, Annie has a PhD in Conflict Resolution. What? Yeah. But she is teaching dumb sociology because she can’t run her own program anywhere. Until now. Her boss (Kristin Chenoweth) has to make some cuts to the department, and she is too awesome for them. Luckily, she set her up with an interview at UCLA, to run her own program there and have a real job with real monies!

The only problem is the city. LA. Turns out Mr. Bronson is in the witness protection program, and yes, he is from LA. That is literally the worst possible city to have the job at.

But he doesn’t care. Screw it, he will drive her to the interview himself. It has been four years for him, it shouldn’t matter at this point. She knows he is in witness protection, so even if his secrets come up, she should accept it right? Nope. Not if he used to be the getaway driver for his bank robbing friends (Bradley Cooper, Joy Bryant, Ryan Hansen).

Unfortunately during this routine trip to LA for an interview, Annie’s ex boyfriend (Michael Rosenbaum) gets a bit jealous, always has been, and actually figures out his real identity through his cop brother (Jess Rowland) checking up his old car’s plates. So course he contacts his old buddies, who he ratted out and are now free (technicalities), causing a race to LA with lots of guns and crazy chase scenes. Not to mention the Marshall assigned to check in on Charles (Tom Arnold) going along for the ride as well. 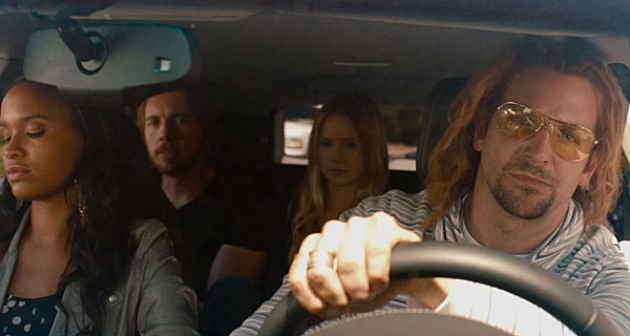 Oh no, looks like the find them and have an uncomfortable sex talk scene!

Hooo boy. This movie ended up actually having a lot more car driving chase scenes than I thought. Nothing to the level of Fast and the Furious craziness, of course. No, those people use NAS and stuff. Just straight up old school racing is what it felt like, with a soundtrack to match. They were thankfully exciting.

I also need to give a lot of props to Tom Arnold, he hasn’t been doing as well on the humor, being mostly a spaz in all of his recent roles. Well, it is true for this one too, but it works really well for once.

I was annoyed every once in awhile, I thought Bell’s character didn’t make that much sense, based off of her background. I don’t think anyone would actually assume someone was lying to them by not telling them about their witness protection circumstances. Probably laws about that stuff! But I found it pretty funny, with some nice chase scenes. Some over the top, unbelievable characters too. The ending wasn’t my favorite, just felt a bit weird. But hey, most of it was awesome!