Most likely, every time someone heard of the movie Hamlet 2 they did a quick double take, and possibly throw in a “da fuq?” Presumably most of you knew what happened in Hamlet as well, because it helps.

A sequel to Hamlet doesn’t make any sense. And when you find out the movie isn’t even a straight sequel to Hamlet you got even more confused. A high school class putting on a production called Hamlet 2, and involving time travel and bad language? Well uhh.

Then you probably got curious, saw a zany trailer, and got turned off from watching it. I also assume most of you are identical to me, obviously. 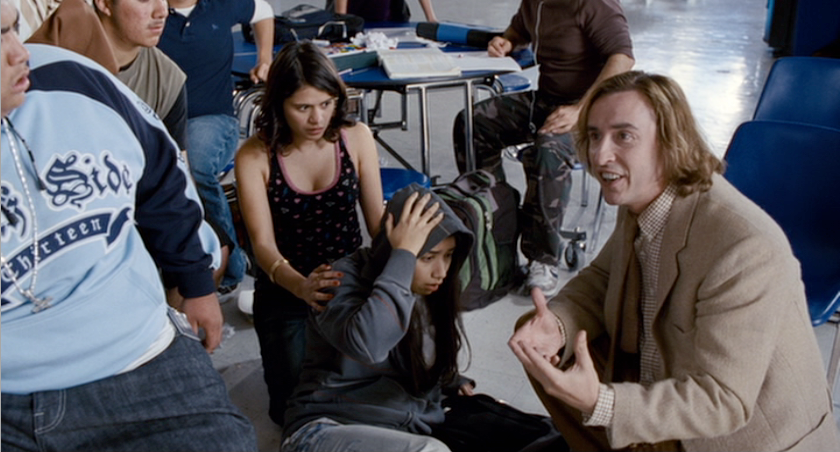 Dana Marschz (Steve Coogan) is a going no where drama teacher. He tried to be an actor, but sucked, and is now a recovering alcoholic. But hey, he has a wife! (Catherine Keener) and they have a shitty income, so they take in a person to pay some rent too (David Arquette).

Despite all this, he continues to make shitty plays for the school which tend to be adaptions of Hollywood movies. Marschz finds out from the Principal (Marshall Bell) that at the end of the year, the drama department will be budget cut as well and his job gone. Well fuck that, he sets off to make the most original play he can possible. So why not a Hamlet 2, with time travel to save the characters, and Jesus and other historical figures? Why not?

Well for starters he only has two people who actually care about acting in the class, and they might be racist. Rand (Skylar Astin) and Epiphany (Phoebe Strole) are stoked about it, but how does he get the rest of the class to care? Turns out not too hard with the content material. Ivonne (Melanie Diaz) jumps on board right away, but when Octavio (Joseph Julian Soria) finally gets involved, he even gets to take over the main part.

This pisses off Rand, who takes the script the Principal who immediately tries to shut it down. This causes a big free speech uproar, and Marschz even gets represented by the ACLU (Amy Poehler). But despite all this publicity and uproar, is there even a chance that the play is even good? Also, Elisabeth Shue plays herself, as someone also living in Tuscon, where her dreams went to die.

I haven’t even made a reference to how I would describe Jesus in the play.

So uhh, the play was kind of awesome as shit. Which I didn’t see coming. The musical numbers were good, both directly involved in the play and from the helping choir, the plot was a bit touching, and no one really got offended too badly.

The film attempts to be a parody of other inspirational teaching movies, and makes reference to quite a few. Except the teachers are never as inept as the one in this movie, who acts way over the top and makes it quite obvious why no one takes him seriously. The kids all also don’t really want to act at first, and it is almost as if having controversy make them care more about the play, just to fight the bad press.

I really didn’t enjoy the first half of the movie. A lot of the jokes felt forced, even if it was a parody or satire or something. Just wasn’t amusing. The second half was a lot better though, which wheels were in motion and the play occured. Its like the intentionally didn’t improve the quality of the movie until the characters cared more about their own play. Is that clever film making? Or just a coincidence?

But seriously, I loved the play it self and made it worth it to see.