Eye catching titles means you will definitely acknowledge its existence.

Hail Satan? is about the founding of The Satanic Temple (in 2013) and what the group has set out to accomplish in the years that follow. First and most importantly, The Satanic Temple is different than the Church of Satan. The Church of Satan has existed since the 60’s, but doesn’t really believe in Satan. Mostly atheist members doing stuff for fun, no sacrifices, some magic.

The Satanic Temple is also non-theistic in nature and not running around believing in Satan. However, their goals are social in nature. They are actively fighting for equality, for the separation of church and state, believe in education and freedom. Not radical causes, just thinks set up in our Constitution and amendments, mostly.

They are called The Satanic Temple though for buzz reasons. It gets articles printed, it drives the point home, and sure, there use the imagery because it frankly looks cool. 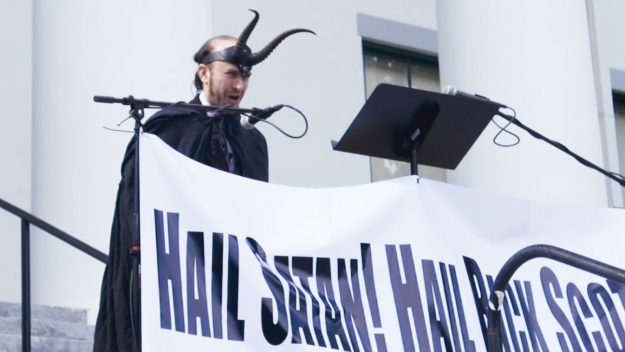 Did you know people still protest things like this? Just the showing of the documentary in Houston at the Alamo Drafthouse had some Christian protesters against this documentary that they have not seen, on title alone.

Except for everyone that matters, this church isn’t a real church. They are doing it to make a point and we all agree on it and its awesome. They don’t think religion should play a part in politics. And to make this obvious, they try and put their religious imagery up when Christian imagery is allowed to make it more obvious for everyone. If the ten commandments get a statue outside of a court house, then they should be able to as well. If they aren’t allowed, they will sue.

Now, putting up their statue would be rad. But they ideally would not want every group to get to have a statue, but no groups at all, so that it can remain separate. And again, this is what people are protesting about stopping for dumb reasons.

The Satantic Temple just wants people to use their brains and follow the laws set out in our constitution, and protect freedoms. And they do it in a fun way.

Now this documentary highlights some of their work and their founding, but overall, it is a rather regular documentary at the end of it. Nothing too eye catching or illuminating by the end. It didn’t change me in any way. It just felt neat. An okay documentary that would be more important for someone who has never heard of this movement before.