You know what would make Grown Ups better? More SNL cast members. I don’t think they got enough of them.

Just kidding. That was the opposite of the truth. With at least 8 people who are (or used to be) SNL cast members (could be more? I am not an SNL addict), it helped the movie seem like a “old friends get back together” type event anyways. 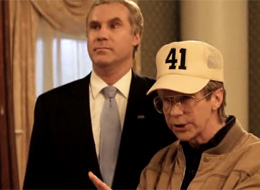 Some people weren’t invited to the reunion though.

Alright, the movie is about a group of old friends from a smaller town. When they were younger, they won a basketball championship. Now? Their old coach is dead, so they are celebrating his life with a reunion for the weekend.

We have Adam Sandler, now rich, married to Salma Hayek. Kevin James, now fat, married to Maria Bello. Chris Rock, now a housedad, married to Maya Rudolph. All three of them have two kids each. Rob Schneider is on his third (or fourth?) marriage, and has 3 kids (two of which are babes). And last, David Spade, all alone and a bachelor.

OKAY GOT IT ALL? GOOD.

Anyways. Throughout the weekend they try and relive their childhood. They try and get their kids used to the outdoors. They try and fix each others problems, as they haven’t seen each other for a long time.

By the end, the kids are outside more. Their lives are fixed by each other. They are bigger friends. And their wives still don’t hate them. That is more or less the plot. Mostly just a bunch of random events and activities, where these now grown ups get to try and relive their childhood memories, and joke on each other the whole time.

I mean. Parts were okay? I thought it had a couple decent moments. But they obviously tried to make it too family friendly and just felt muzzled. I think Schnieder was badly cast as “weird spiritual vegan dude”, and Spade as a bachelor felt very child predatorish. He is the creepiest single man alive, and I would even compare that to myself.

No one else (outside of Bello and Schnieder)) probably had to do much acting. I think most of it was them just acting like they probably normally would act. So I thought that was kind of lame. Just everything seeming more or less normal. Oh well! I think we can all agree though that Rob should try going back to red hair, am I right? 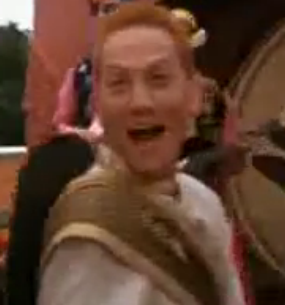 Badly pixelated for your protection.

So yeah. Nothing really special about this movie. Just a subpar comedy.