Am I doing it right? Definitely not at all to be confused with Ghost World, which is about Scarlett Johansson handling 2nd billing early in her career.

No, Ghost Town actually has ghosts in it. And it assumes there is an after life. Controversy? Not at all. People love ghosts. As long as they aren’t trying to kill them. 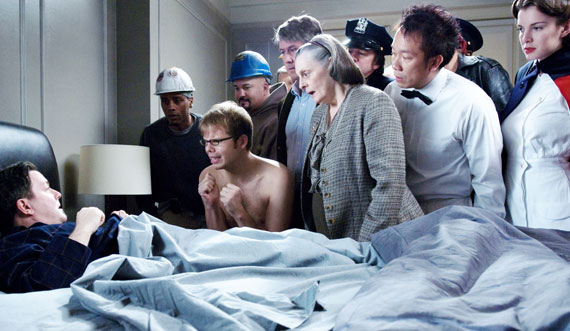 Currently no idea if these are the ghosts people love.

Ricky Gervais is a Dentist but hates people. Social situations he is not the best in, and tends to always keep to himself. Won’t even hold an elevator. Doesn’t talk to his coworkers. But when he goes into a routine surgery for some bowels problem, due to an anesthesia error he technically died for about eight minutes. He only found this out after asking his surgeon, Kristen Wiig, if any complications arose because he claims to be having hallucinations.

Turns out those hallucinations are real, and that they are ghosts! Ghosts who find it odd that a live person can see them, so they begin to harass him into helping him solve some of their last wishes. Because clearly if Ghost stuff is happening, their time on the Earth isn’t over! One of the more persistent ghosts is Greg Kinnear, who we get to see die first in the film! He was a cheating son of a gun, getting a new apartment just to have to cheat with his wife, Tea Leoni. But she finds out form the Realtor, and just assumes it was a gift for the both of them! Yay new place.

Well that apartment building is where Ricky lives and he has been very unpleasant to her. When he finds out Greg’s goal is to stop her marriage to a human rights lawyer, Billy Campbell, because he is a “bad guy”, he agrees only because the rest of the ghosts are supposed to leave him a lone. They agree the best plan of action is to get her to fall for someone else (awkward) and by george, Ricky wants to do it himself.

But he is still an asshole / bad guy / socially inept. Not to mention Greg lied about getting the other ghosts to back off. What else was he lying about? MORE QUESTIONS THAT MAKE YOU WONDER WHAT WILL HAPPEN? Also, lots of other ghosts. But Alan Ruck is one, so he is my favorite. 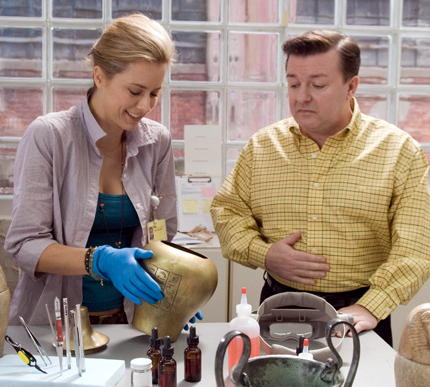 This is my idea of a good time.

First off, Wiig was only in this movie for about two scenes. Pre surgery, and worrying about his hallucinations post surgery. The first scene isn’t really much, but that second scene is one of the funniest things I’ve seen in awhile. I’ve seen the first part of it on Scene It before, and now it all makes sense. So she gets a credit role for that.

The plot is kind of predictable, just not the path. You know eventually he will probably begin to change his ways, be more friendly, help out the other Ghosts, etc. Maybe find love? But it wasn’t a straight line and was an actual good journey. Took some elements from a 90s movie Heart and Souls, staring a pre-coked Robert Downey Jr, but neither were the first to assume ghosts are on Earth until they finish a task.

But I found the only thing not only funny but enjoyable. Pretty much the exact opposite of The Invention Of Lying, another Gervais “comedy”. Plot was descent for what it was, and didn’t go into any sort of religious stance.