Generally, most people will tell you they were disappointed with the original Ghost Rider movie. Ghost Rider himself is a cool concept, and a bad ass character, but for people to go home feeling bored? That isn’t good at all.

With most of the Marvel movie characters that they no longer own, such as Spider-Man, Fantastic Four, X-Men, and Ghost Rider, there are contract stipulations that state they must use their movie rights or else they will go back to Marvel. From the looks at it, it looked like there wouldn’t be another Ghost Rider movie, and Marvel would actually get a character back! Hooray, even if its one they can’t use that much.

Then there was news that they wanted to do another movie anyways, regardless of how bad the first one was. A RUSHED movie. Well, no way Nick Cage could be involved. Wait what? Nick Cage signed on too?

That is pretty much the only constant between Ghost Rider and Ghost Rider: Spirit of Vengeance, so the outcome should be different, right? 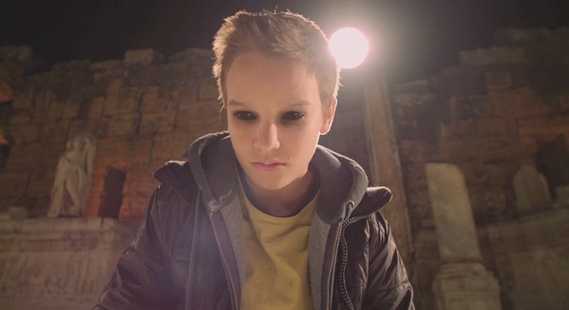 These eyes. Cry out every night. For you.

This film takes place in Romania, and yo\u do not need to see the first one to see the second. Every character is different, even kind of changed how he turned into Ghost Rider. Instead of Mephistopheles, it is Roarke (Ciarán Hinds), but still a generic Satan/Devil, just played by a different guy.

Moreau (Idris Elba), a drunken French priest is seen trying to warn a clergy that the Devil has sent men to capture a woman and a boy they are hiding, but they don’t believe him. And then they get fucked up, but thankfully the woman (Violante Placido) and the boy Danny (Fergus Riordan) get to escape, with Moreau’s help, but he loses them. So he finds out Johnny Blaze and asks for his help. He doesn’t want to, he just wants to be left alone. After all, he only hurts people anyways. But if he helps him, he is promised that they can undo his fiery curse. Sounds good.

So he catches up, right before the mercenaries lead by Ray (Johnny Whitworth) are capturing them. After killing a few he gets distracted, and wants to kill the kid sensing a great evil, but it is knocked unconscious and stopped. After escaping a hospital, he finds the woman and Moreau again, and they device a plan to find the kid and get him back. Eventually the find out the kid is actually the son of the devil, and Roarke is hoping on unlocking his full power (and those deep dark eyes!). Moreau wants to take him back to his church, lead by Methodius (Christopher Lambert) and freeing Blaze of his Rider curse.

But when everything inevitably goes wrong, can Johnny Blaze free the kid from his fate, after he has freed himself from his curse? Also, angels and spirits of justice? 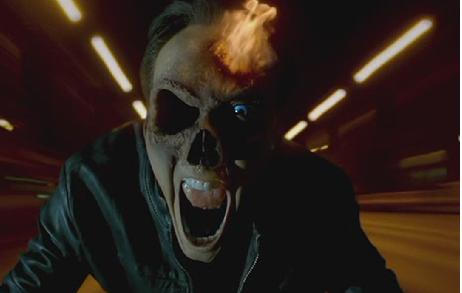 Don’t even ask me about this moment.

Blahhh. Honestly, the plot doesn’t sound that bad on paper. Especially if I fully explain more of the curse, as it is figured out in the story. I am even fine with where the film ends. It just would be a much better ending for the first film, and not the second film.

He turns into Ghost Rider three times in the movie, and none of them really seem that important. The fact that in his first encounter he gets knocked out from a blast just seems silly, after what we see of him in the first encounter and first movie. The second fight is way too long, and the character does many pointless things when his goal should be to kill them all as quickly as possible. The third fight is more of the same, but with a powerful enemy to fight, who actually turns out to not be that special.

When you have a character who really can’t be stopped / killed, there is no fear for survival or suspense. Just kind of lame. Action was boring. Plot was confusing in that it made it seem like the first film never happened, despite maintaining the same main actor for the character. That is some shit. I hate ret-cons. Also lots of unexplained plot directions. Give it a pass, but the third film might be better.