I first saw the preview for Gentlemen Broncos years ago, but then forgot about it. I remember it sounded interesting, if not fucking weird. Unfortunately the box screams out don’t watch me. After all, its biggest selling point is from the creators of Napoleon Dynamite. Eugch. 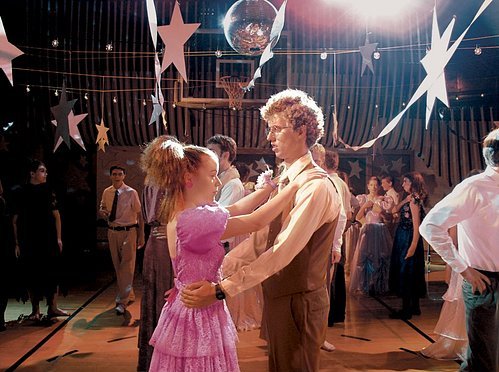 Although I like weird movies, I generally prefer some sort of plot to go with them.

Michael Angarano (guy from Sky High. You should know that by now. Sky High may be my most linked to movie that I have never reviewed) is a home schooled student in a small town with strong morals. A simple life he leads, as his dad died a long time ago, and his mom, Jennifer Coolidge, makes night gowns and clothes, for hefty prices. She also has an obsession with making objects from popcorn balls.

Anyways dude likes to write stories! Has his whole life, preferably sci-fi. His best tale is called The Yeast Lords, and is about a futuristic world and you know, lot of weird stuff. His main character is Bronco, played by Sam Rockwell. Mostly because throughout the movie when people read the sections, we get to see the story in all of its (wtf) glory. His mom does an awesome thing and sends him to a very small writing camp for home schooled people, where he meets controlling Halley Feiffer, and her friend Hector Jimenez (from Nacho Libre. HUGE MOUTH) who makes movies/trailers.

Anyways, he enters his story into a contest. The best story is supposed to get a small publishing deal. But famous sci-fi writer Jemaine Clement is in danger of losing his monies, because his last few stories have sucked. He is drawn into Yeast Lords, and changes it up, taking it as his own. He of course changes all the names, and makes Brutus a transsexual, and bam, best seller. At the same time, Mike has sold his film rights to Hector, and they are creating a short film based off of the Yeast Lords as well. Will Mike be able to prove that the Yeast Lords is his own story? Will Jemaine get away with it all? Why does Mike White looks so damn weird?

Just how badass are the Surveillance Does?

As you can probably guess, the parts of the movie starring Bronco/Brutus are amazingly cheesy and poor looking. This just gives them a better charm, because the story is in no way captivating. The films comedy thrives off of the general awkwardness of all the individuals involved that just will not go away. The movie had a believable ending, based on the type of world it set up anyways, and you more or less think everyone got what they deserved by the end.

So I thought it was great but it is definitely a weird one.