Not going to lie. When I first saw the trailer for Gangster Squad, I thought it might be interesting. But I was worried based on the dialogue given it might all be cheesy. But I do love vigilantism. Especially real vigilantism. But above all of that, the thing I liked most was just the music featured in it. Made me all sorts of pumped up. But I learned long ago that if I hear a song in a movie trailer, it most definitely won’t be in the movie. 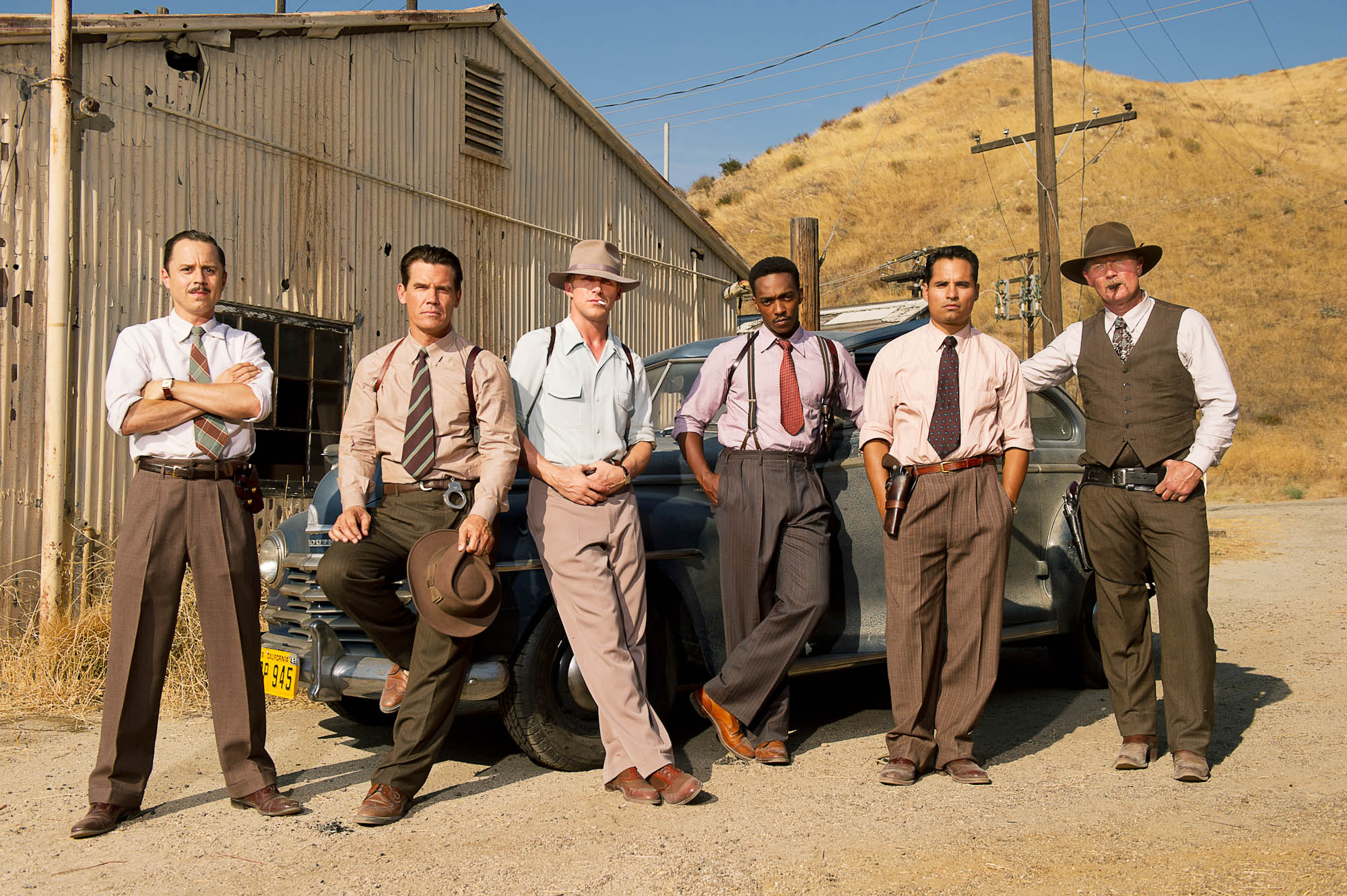 It is amazing that he picked such a diverse group of guys too. I had my money on all white all middle aged!

In the late 1940s, the city of Los Angeles is under siege. Not by the Russians or Germans. Nope, by Mickey Cohen (Sean Penn). From New York, he is now the most powerful criminal in LA, having bought cops, judges, you name it. No one can touch him, not even the mobsters in Chicago. Not everyone is corrupt though. Once Chief Parker (Nick Nolte) sees that Sgt. John O’Mara (Josh Brolin) has brought down an illegal brothel by himself, he enlists him on a secret mission.

There is no way to get Mickey Cohen legally. Killing him wont do anything, someone will just take his place. No, he needs to leave his badge at home, recruit a team (or squad, if you will), take down his entire infrastructure, and sure, maybe kill a bunch of gangsters.

Fuck the law, do what is right!

Well, he gets a team of mostly cops, people who aren’t as worth being bought off who all have special skills. Conway (Giovanni Ribisi), an intelligence expert, Coleman (Anothony Mackie), who grew up on the streets and is one of the few who cares to fix them, Max (Robert Patrick), a fabled cop who has quick hands and can hit anything, and Navidad (Michael Pena), his Mexican partner who is willing to do anything.

Oh, and of course another detective Jerry Wooters (Ryan Gosling) who has a personal vendetta against Cohen, and not just because he is sexing up his current fling (Emma Stone). 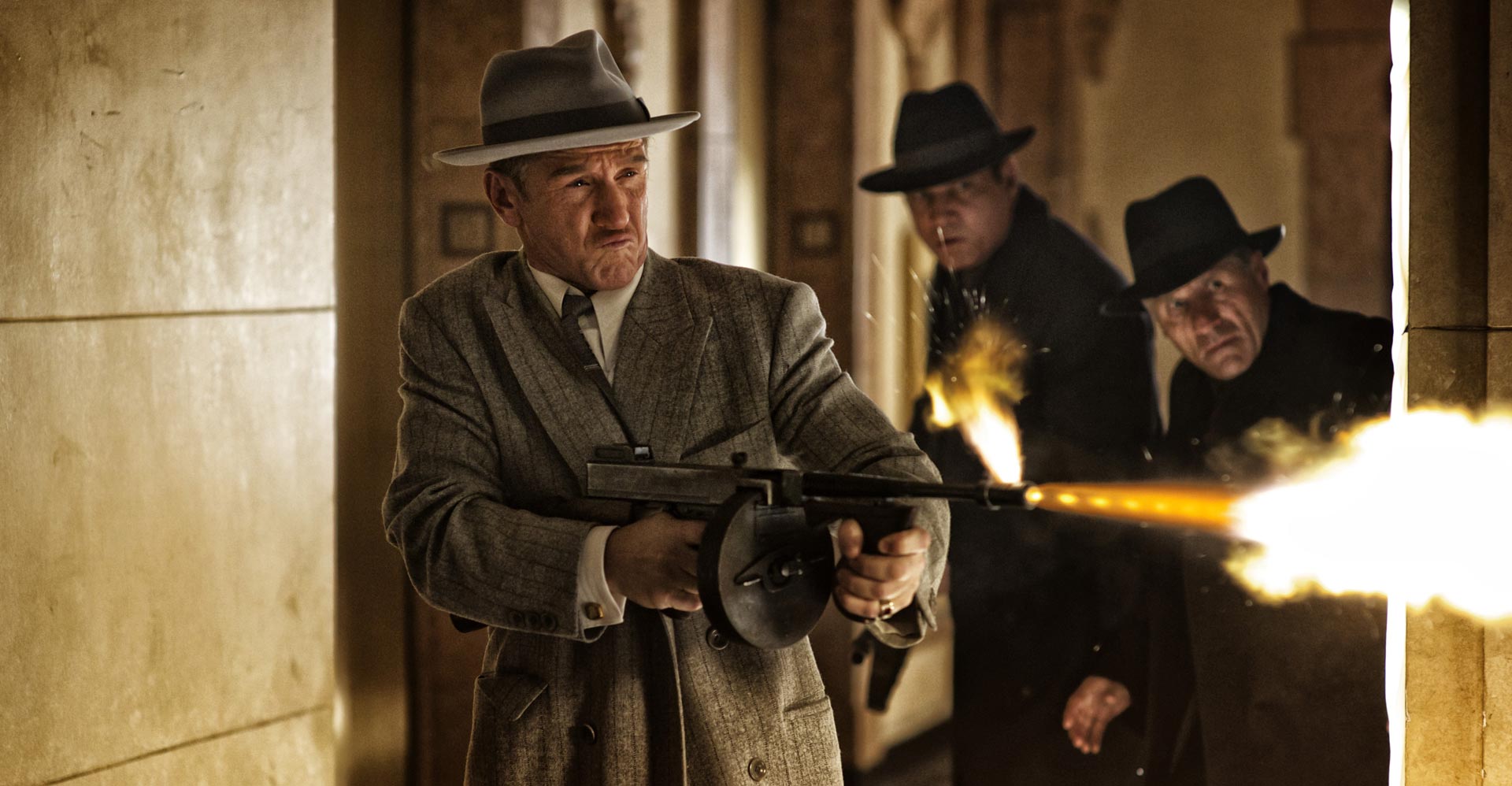 Cohen is going to get those coppers, so hard they don’t even know it yet.

Whew. Well, if you watch the trailer, you are going to get exactly as it shows. The lines are unfortunately mostly cheesy. The “No Ma’am, I was just hopin’ to take you to bed.” Imagine a whole film of that.

I think the movie is a bit of a shame. A lot of great actors involved, but it felt a lot like a no emotion cartoon. I didn’t feel sad when they wanted me to, nothing really resonated. The chemistry is really what was missing here. Between everyone, but especially between Stone and Gosling, who had an unbelievable romance going on. We know they can do that too, since they were together in Crazy, Stupid, Love. So I guess it is a director issue?

Another reason it felt cartoony to me was the filter they used to film it. I don’t know what it was, but look at the second picture. It has a yellow/orange tint almost, but something about it just really turned me off from the whole movie.

The fact that this is based off of a true story seems like a farce as well. It might actually be that Mickey Cohen existed only, in which case, fuck your true story tag lines.

Action was okay, acting was mostly forgettable, except a few Sean Penn moments. It was weird seeing Giovanni Ribisi as a good guy finally, so I am glad he can not be type casted (so much) anymore.