Honestly, when I just read the title I knew I had to watch it. It is one of those movies.

Well damn. Don’t have to try so hard, United Kingdom. 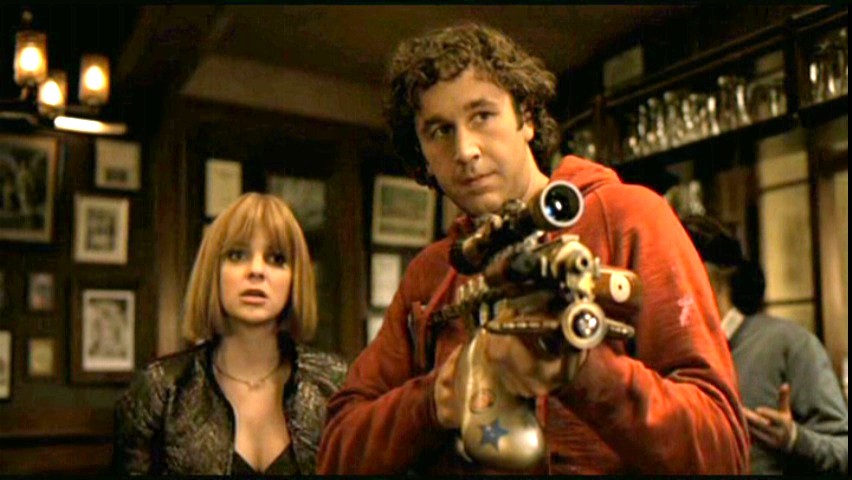 Oh, and this movie involves a gun!

The movie is about three friends at a bar. Ray (Chris O’Dowd) just got fired from his job for making kids cry. His two friends are Toby (Marc Wootton) and Pete (Dean Lennox Kelly), the former a cynical asshole, the latter a fellow nerd who likes to come up with movie ideas and his thoughts on shit (like time travel) in a little notebook.

Well while they are getting drunk and complaining about stuff, Ray goes to the backroom, and when he returns he sees a girl staring at him. Cassie (Anna Faris) is claiming to be a time traveler, and she just came to observe a “Great man” in his past. Can’t tell him why of course, that would fuck up time. But she leaves and Ray just assumes of course that it was a prank. He tells his friends anyways of course until he doesn’t believe him. It isn’t until Mr. Cycnical asshole Toby goes to the bathroom and returns to find the entire bar dead, including himself (with a beard?) that he starts to freak out. He returns to the bathroom and his own time, and the tries to get the group to do everything he did before in the bathroom to try it again.

It doesn’t work. Instead they find themselves in a House in the future. Well fuck.

Obviously things start to get a bit confusing, as they are trying to figure out this time leak going on, with Cassie only ocassionally showing up. They also go into the far future full of destruction, and less far future where they find themselves at a costume party, where everyone is dressed like them from the bar that night. But why? Why are they worshiped? Can they also avoid the people who like to go back in time and kill influential people right after they hit their peak for fun? I’m sure Meredith MacNeill isn’t one of those people.

Oh the things people must do for science.

I like that the movie is about three “Average guys” or at least nerdy ones. Unless you think nerd is a bad term, in which case “Imagineers”.

This movie is pretty crazy and it is very easy to get confused, especially early on when they don’t even understand what is going on. There aren’t helpful subtitles to say when in time they are, because they don’t know. They are just trying to survive and not break any time travel rules they are aware of. I also thought it was pretty funny, even though most of it was just based on awkward people in extraordinary circumstances.

I heard they originally planned to make a whole series of these low budget comedies, the next one being FAQ About Parallel Universes, staring the same people, and going through these crazy ass adventures. But they had to stop it, which was a shame. The movie is pretty refreshing in terms of topic, how they handled it, and the potential for more. Also, they say fuck you fate/predetermination.