Sure, months after Halloween, and heck, near Christmas. How dare I review Frankenweenie now! Clearly I should have reviewed it around the same time as ParaNorman or Hotel Transylvania. But jokes on you, I just didn’t want to see it and pay more than $5 for it. Nope, cheap theater or Red Box.

In case you didn’t know, this movie is technically a remake. No, not of Frankenstein. But of Frankenweenie, a 30 minute film Mr. Burton did in the 1980s. I saw it before, was weird, but hey, it had Daniel Stern in it, also weird.

But yeah, no real interest in seeing a Frankenstein parody, set in black in white, and Burton-ified. 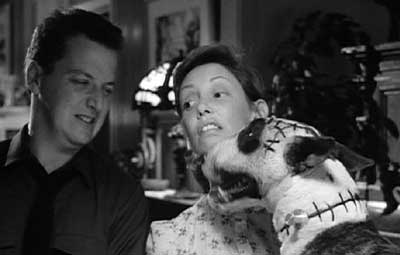 Oh yeah, original film was live action black and white. And come on, Stern, what the hell? >

Victor Frankenstein (Charlie Tahan) loves his dog Sparky, more than anything. He uses him to make cool home videos involving giant dogs saving the city from monsters. But he is like, the only friend he has. No sports or anything. His parents (Martin Short, Catherine O’Hara) wish he would branch out, play sports, but he keeps to himself and his dog. Yep, science and movies only.

Either way, dog gets dead. Sad times are had, and Victor is lonely. However, learning some crazy science stuff from his teacher Mr. Rzykruski (Martin Landau), that electricity and muscles can still do things post death, he gets the great idea. Yes, maybe, maybe, he can provide enough electricity to actually bring Sparky back to life.

But a dead animal coming back to life? That is not something your average citizen will be able to accept, or understand. But when all the kids in his class start to learn about it, and assume he is going to present Sparky to the science fair, they decide to try and recreate the experiment on their own. Hmm. Winona Ryder also voices the neighbor girl, who is also weird. 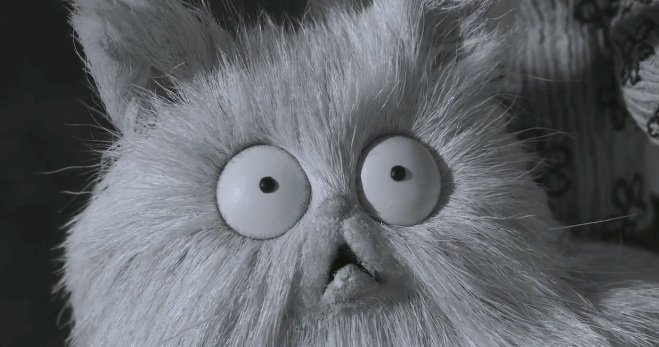 Then something else happened. I found myself entertained, basically the whole movie. Sure, at the beginning, I might have just been waiting for the dog to die. Sounds bad, but we all knew it was going to happen. They could have maybe sped that up. But it allowed them to introduce us to the other kids, why he doesn’t have friends, and Mr. Whiskers up there. Turned out the wait made the ending a bit better too. Good things comes to those who wait, and shit.

Burton also SLATHERED the movie, yes SLATHERED, with classic horror film and literary references. Gags set up just to get the point across. I actually figured it would be cheesy, but I enjoyed seeing them play out, and getting references to other monsters, like the mummy, a vampire, swamp thing/gremlins, godzilla, and werewolves. All of these things get featured, and in ways you might not have expected.

The ending I think should have been different, you know, to get the point across a bit better. But I guess if it was entirely like Frankenstein, I would have just been pissed off.