Two years ago, we were finally given Fifty Shades of Grey. After years of anticipation. And we were given an R rated film that wasn’t as intense as the book, when all we wanted was an NC-17 penis showing flick.

It was bad, but it could have been worse. And strangely enough, the parody, Fifty Shades of Black was just as good as Grey. Meaning they both were bad, but just as bad as each other.

And now we have Fifty Shades Darker. Which according to my wife is a better movie, focusing less on people getting beat and more on a story. But books don’t always translate well into film, so I will note I am expecting the worst and hoping for…well, the worst as well. 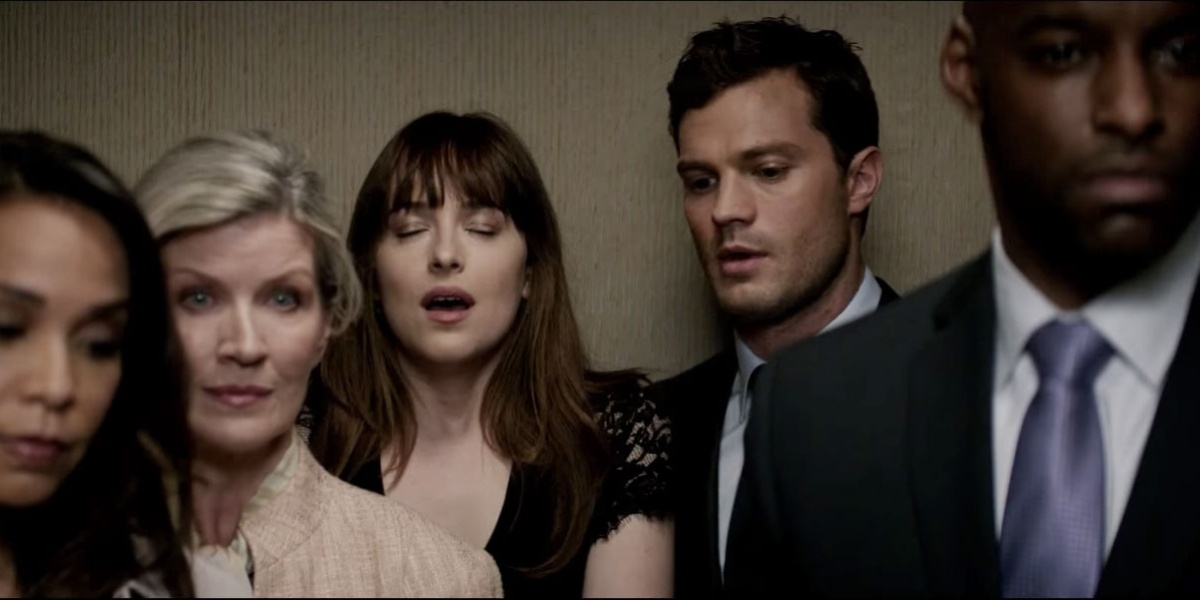 His hand is in or near her vagina.

Unfortunately this movie does not begin inside the elevator as Anna (Dakota Johnson) leaves Christian (Janie Dornan) for good. No, it is some time later, maybe even months. Christian sends her gifts, she ignores them. And instead of working at a hardware store, she has a job as an assistant to a fiction editor, Jack Hyde (Eric Johnson) in Seattle.

Life is good for Anna now, but she still misses Christian, just can’t handle his paddle. Anna also keeps seeing a creepy girl (Bella Heathcote) watching her every once in awhile, with bandages on her wrists. Blah blah, eventually Anna talks to Christian again, and immediately wants to hop on his dick some more. No more contract this time, just a slow relationship with immediate passionate sex and foreplay. And despite saying no rules, there are still some rules. Like he can’t just hurt her. And she can’t touch his chest. Oh okay.

Oh, plot. There is a plot. Yes. Okay, the boss of Anna’s is an obvious jerk and jealous of Christian. The creepy girl is one of Christian’s past subs still obsessed with him. And there is Elena Lincoln (Kim Basinger), the woman who taught Christian about sex, involved with his life and being a bitch too. And hey! Christian has a new security dude (Max Martini). Anna still overreacts to a lot of things, and Christian still doesn’t know how to carry on a conversation.

Oh, and of course flashbacks that imply that Christian’s fetishes are actually the results of abuse, abandonment, and things he has to change and not something Anna has to accept.

0
Now you cannot see their shame or anxiety.

There are so many things wrong with this movie, I knew it would be an easy and fun analysis to write. First major issue is of course that it ended up being worse than the first film! How was that possible?!

Darker decided to go a different route with the story. No, there is still some level of eroticism. But in way of public acts and sex beads, versus more traditional paddling used in the first film. A film can have all of this and still be a good film, but unfortunately instead of going for a good film, they decide to just take any and all important plot points and resolve them as quickly as possible. They must have decided that these scenes only exist as a way of transitioning between soft core porn scenes. But you know, still quite softer than anything else that exists. Because it is just an R rated movie with “Some graphic nudity” (meaning no, we still don’t see penis).

Now lets go into the scenes between sex. Well, there are technically some important plot points that occur in the film. Like Anna’s boss being all rapey. And right after the threat exists, in the next scene he is already fired and then she has his job. Boom, resolved. She has to go to a meeting in his place, we then hear a stupid idea, her obvious and better idea, boom, they like it, she is great at her job.

There is a helicopter crash. And within the next three minutes, despite being in a mountain wilderness, they area not only found to be alive but hey, back at the house and just seemingly ignoring that it even happened. There is a creepy girl, who appears a few times, and boom, she is subdued, lets move on.

This means the plot of the film is just their relationship, without a viable end goal. And with our ending, it isn’t as bad as the first one, but it feels like a terrible cartoon, with returning characters looking badly menacing. Shit, it is worse than a terrible cartoon, it is more like a bad soap opera (not a good soap opera).

Obviously the acting is still bad. Anna is still annoying and overreacts to everything. Christian is a character who has no ability to express feelings, so Dornan is wooden.