I do love it when a play becomes a film, assuming the play is a good one of course. I am a huge fan of dialogue, and plays usually give me good dialogue.

But what about a play I actually know? I don’t own a lot of plays, but I do own Fences. I never read the whole thing, but I had to read parts of it for a college level drama class. And the parts and themes that I saw I really enjoyed. So needless to say, I was pretty excited to see this coming out as a film.

And here is an even bigger reason to get excited. This play was actually given a revival in 2010 on Broadway, starring…Denzel Washington and Viola Davis! They both straight up won Tony awards for their portrayals. That means this film is them reprising a role they already kicked ass at, for the world to enjoy, six years later. That is pretty darn gosh nice of them. 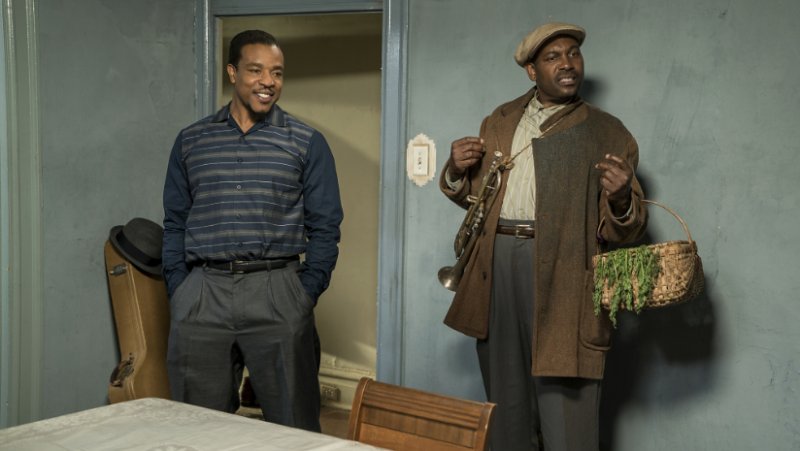 And here are some other cast members because it is awfully hard to find pictures of anyone else.

Set in the 1950’s, we get to meet Troy Maxson (Denzel Washington) and his friend, Jim Bono (Stephen Henderson), getting done with work. It is Friday, pay day, they work on the back of a garbage truck, and Troy might be getting fired for asking about why no black men get to drive the garbage trucks.

But Friday means pay day, and drinking day, so it is a good day. Even when his old son Lyons (Russell Hornsby) comes to visit to borrow money. Even when his wife, Rose (Viola Davis) gives him an occasional hard time. Even when his son, Cory (Jovan Adepo) is seemingly throwing away his future by wanting to go to college for sports instead of getting a real job.

And his poor older brother, Gabe (Mykelti Williamson), who went off to World War II and got injured. Now Gabe has a metal plate in his head, isn’t all there, and receives a government check.

Nah, but Troy loves his life. No reason to mess it up, people respect him, and he will live out the rest of his life care free, assuming he ever shuts up.

And I didn’t even talk about the fence.

For those that didn’t know Fences was based on a play, I’d hope they’d realize in the first ten minutes. Characters just hanging out in the back yard, telling stories, giving long lines, and talking, talking, talking. For those who hate excessive dialogue, you will not enjoy this movie.

Not all play movies feel like a play, but this one certainly does. Over 90% of the film takes place in or around a single house, with characters walking in and out. I was a bit surprised how many different cuts and angles they threw into the film. These are people who have rehearsed these roles and done them many times over, so they could have done entire scenes in one long go, but Washington decided to embrace the movie aesthetic and let us get emotional shots and not just artistic long shots.

Acting of course was amazingly good. Washington gets nominated for Best Actor all the time, and honestly, I wouldn’t mind if he won it again. Casey Affleck for Manchester By The Sea is the favorite I believe, and either of them would be totally worthy of the big prize given their performances. And Washington wasn’t the only good part. Davis is a virtual lock for Best Supporting Actress.

But Henderson and Williamson also were pretty damn good, with a bit more limited screen time. Henderson also was in the Broadway version, so it is nice to see him still acting well. Fun Fact: Henderson was ALSO in Manchester By The Sea. Williamson did amazing as Gabe, a special needs character, but also you might remember him as Bubba from Forrest Gump. Apparently that is just a talent of his.

Fences is emotional and deals with a lot of themes. Despite being set 60 years ago, they all still resonate today. Troy is a terrible person and character, but at the same time, it all just seems to make sense given his upbringing. The Sins Of The Father trope is a strong one in stories, but it is illustrated excellently in this story an instant classic.