The documentary Fed Up was something I heard about many months ago when it was roaming the film fest circuit. Outside of having its own interesting topic, the significant other really wanted to see it too.

I try to only do one food documentary in a given month (because it is a very popular genre for whatever reason, like my last one Forks Over Knives) and this one is indeed again about health. But it has a very specific goal.

Obesity and diabetes in America. Okay. I guess that is what a lot of those are about too.

This one is brought to us (narration and produced) by Katie Couric who she has self claimed made a life out of reporting on these issues. Which issues? Well, clearly I am just filling this top half with filler until I start talking about them, so I might as well show you the picture now and get it over with. 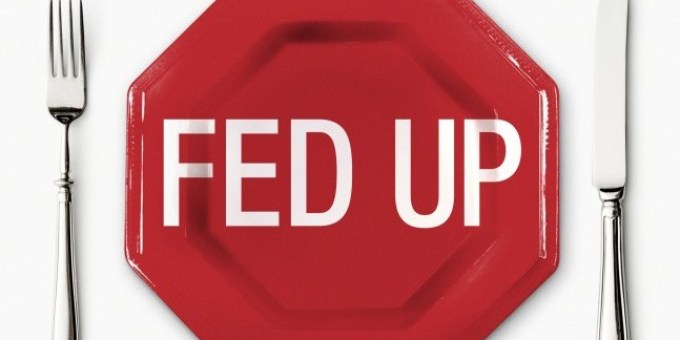 The title is a pun. Pun’s make the documentary world go round.

So what is bad. Processed foods? I’ve heard that before. Meat? Nah, meat is normal. So what is it?! Sugars. Namely the high amounts of sugar in products like soda, processed foods and fast food restaurants.

It isn’t as simple as that though. The documentary first attacks the theory of carbs in vs carbs out and that all carbs are created equal. It also argues against a lack of physical activity with a lot of case studies.

In fact, using science, it helps explain just what these refined excessive sugars that appear in most processed foods contain versus the daily recommended amount. It explains how when the industry started to cut out the fat, they increased the sugar content to keep the taste, completely nullifying any gain.

And it introduced us to the lobby groups that have pushed to squelch the sugar information from getting out and the few government programs that have tried to note the excessive sugar type’s harmful effects.

It isn’t just a big witch hunt and they don’t say all sugar is bad don’t worry. Just certain types in certain environments and bad practices these people use that could have caused an obesity epidemic.

I found the documentary fascinating to watch really interested in what it was showing.

I just didn’t like all the tactics it used. It did some bullshitty stuff. For instance, when they were interviewing a “bad person” they showed an unedited part of the interview. So we saw him start to badly answer a question and then go for a do over. That is supposed to show that he is a liar or something. Because everyone else always talks to clear. That is cheap and bad.

It also featured a lot of extravagant animations to get the point through, some of which were pretty extreme. It definitely wasn’t dignified.

In other news, great topic and information, but bullshit fluff and bad documentary tactics dropped it down a peg for me.