I love the summer. It lets me watch all the things I missed, and all the things I didn’t even know existed. Did you know there was a remake of Fame? No, not that TV show, like 2009 a new Fame movie. Hooray?

Yeah, I never saw the original. Or the show. Or the Broadway version. But I know this one is classified as a musical, and I like musicals, so fuck it. 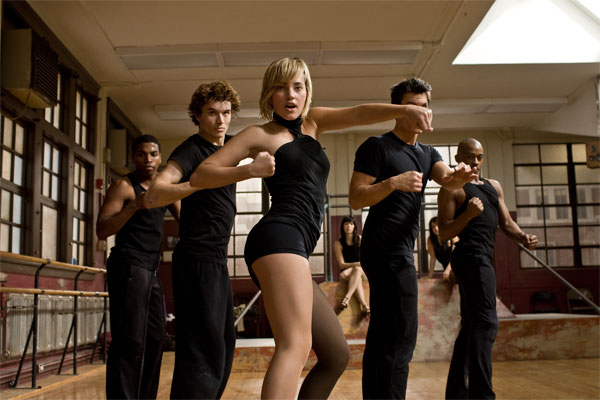 The potential seems high for dance punching and fighting! Classic West Side Story.
Just like the original Fame, I have been told, this story is told in a similar style. It is just a small group of friends in learning how to perform high school. No, it is a few different people who might not share social groups. It is split into 5 parts, of which are nicely labeled, I think. Audition, Freshman Year, Sophomore Year, Junior Year, Senior Year.

We get to see a few students over their careers in the high school, and what makes them tick. Like Jenny Garrison (Kay Panabaker, who you may remember from No Ordinary Family and younger sister of Danielle Panabaker). She is some sort of actor who can’t less lose. This Marco kid (Asher Book) tried to date her for two years and she finally relents. When she takes a card from a big time actor, who might give her a part, Marco is jealous. But she goes to him anyways, basically gets sexually harassed, and Marco can’t stand that commitment and leaves her.

Wait what? Way to be a douche Marco.

Or Kevin (Paul McGill). He came from bumfuck Iowa to be a dancer. He isn’t that good, yet somehow still accepted into the program. People make fun of him. Alice (Kherington Payne) outshines him. His senior year, his teacher won’t give him a recommendation because he is that bad, so he tries that suicide thing. What? How the hell could you be in a dance school for four years if you aren’t good enough?

Let’s try again. Denise (Naturi Naughton) and Malik (Collins Pennie) are both lying to their parents. Denise’s thinks the school is so much more uptight and she’d practice cello 24/7. Malik’s mom thinks he goes to a regular school (what?). Turns out Denise can sing, so Malik and Victor (Walter Perez) put her vocals on a track they are making, which gets played at a club. Alright! But when local producers hear it, they only like her vocals, not their work. Whoops.

Neil (Paul Iacono) wants to be a director, makes documentaries, gets a job to make an indie short film! But really, he just got scammed out of his money. Fuck.

These are all kind of depressing. I don’t want to go on anymore. But hey. Charles S. Dutton is in this movie as random teacher guy. That’s something?

Kay is the most famous actress in this, yet I couldn’t find her doing artsy things.
‘
Oh hey, yeah, I gave reckless spoilers in that review, because no one is going to watch it. No one. If you planned on it, stop right now. It is a jumbled mess. The music is bad. The dancing is whatever. I cared nothing about any of the characters, and just waited for it to be over.

None of the plot lines were particularly good, but they had no chance with so little being told about each person over a four year period. Even if I wanted to care, I couldn’t. Most of them got shit on throughout the years too, in various ways. But because so little time is on every single person, plot lines also get forget about and just ignored for the end of the movie.

How the hell are all these non talented kids getting into a program like this? That is a stupid plot line. Bad movie. Bad.