Extraordinary is one of my favorite words. Especially if you say it for real, and not the shortened way (Extrordinary). Extra. Ordinary. That means beyond ordinary. It means AWESOME.

Well, for Extraordinary Measures, I figured it would be about spies or secrets or government or something. I mean. Look at the cast! Nope. It is a feel good movie about curing diseases. Damn it! 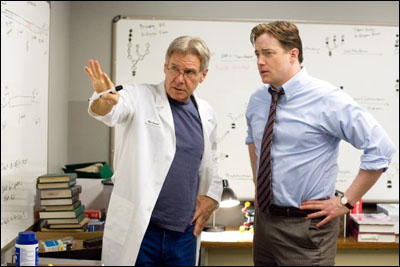 Well, at least we might get some hxc science.

Brendan Fraser plays high up not CEO but business guy who does something. What does he do? Not important. He leaves that job in the movie. But it has nice health insurance. That is good, because out of 3 children, the last two have Pompe disease. Which means something, but just picture kids in electrical wheelchairs, with a fatal disease that means they probably wont make it to 10.

But when the doctor tells him that his two children will both probably die within a year, him and his wife, Keri Russell, freak out. But Brendan freaks out more, leaves working during an “important meeting” and flies out to Nebraska to find Harrison Ford, MD. Ford is a better theorist than he is a scientist, and he believes he knows how to help cure Pompe disease. But he’d need money, and it will take awhile. Brendan says he an get him that money in a month (half a million dollars!).

Well, he only gets $90k. But that is way better than expected. So Ford, grumpy old Ford, says they will have to start their own business and lab, get money from investors, to work on this. But he needs a CEO to do it, and even though there are plenty more people qualified than Brendan, none of them would have the same drive that he has (You know. Trying to save TWO kids). So he quits his job on a gamble. Alan Ruck (who has one scene) tells him it is crazy, but you know one, you have to be crazy sometimes.

So the movie tells of the tale of them trying to get funds, trying to rush science, and do whatever it takes, even if it means their pride have to take a bashing, to find and develop a cure. For added guilt, Coutney B. Vance is a friend of theirs, who also has two children with the disease. 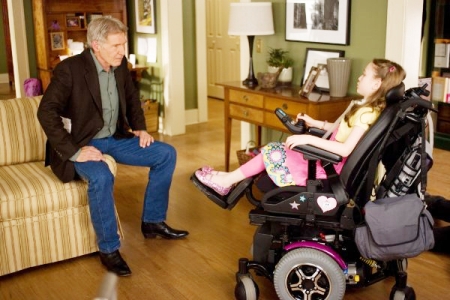 So, this is a feel good movie, based off of the real story. So here are some spoilers. Yes, they find a “cure”. Or at least one one that if administered to infants can get rid of it, but one given to older children can get rid of the dying thing (not the whole, cant walk and etc thing). Yes, the children are still alive today (Posted Jan 26, 2012, for anyone reading this in the 2030s or whenever in the future). Yes, pharmaceutical companies are bitches. Also, no cows were harmed in this movie.

I wasn’t sure if Ford was the best choice to play scientists looking to start his own biotech company. Because he just seems super old. But hey, its Fords movie, so he will be a big role if he wants to! Fraser didn’t entirely mess up the movie either. His goofiness was appropriate, and it seemed like he really cared for these fake, not really Pompe looking kids of his. But everything is expected, and really, nothing too different about this movie and other extraordinary measure like movies.