An Evil Dead remake is something that has been talked about for a long time. Heck, theoretically, Evil Dead 2 was a remake of The Evil Dead, in a way. Continuity and all be damned! But everyone knew this was going to happen for the last decade, and like everything kind of involving Sam Raimi, it took its sweet time.

After all, he has mentioned remaking it himself. Or adding a sequel. Or making a movie off the musical (which is fantastic). Just nothing happened with any of that, until now. But this isn’t Raimi’s film, this is someone elses. Can they do what he hoped to accomplish with the first Evil Dead, with a higher budget? 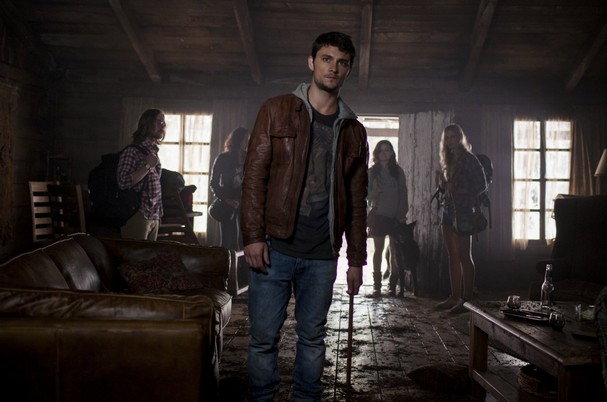 With some more “real actors” too, instead of just his college buddies?

Oh hey look, the movie begins before the actual plot. That is nice. Get your sacrifices on yo.

Much later, we have a cabin in the woods with a work shed. Mmm, work sheds. We have Mia (Jane Levy), out of Michigan St, with her friends, a nurse Olivia (Jessica Lucas), and high school teacher Eric (Lou Taylor Pucci). But they are waiting for her brother, David (Shiloh Fernandez) to get there. That asshat is late. Eventually he shows up with his girlfriend Natalie (Elizabeth Blackmore) and they are ready to start their stay in the family cabin!

But why? It’s old and decrepit. It also smells bad. Well it turns out that Mia is there with her friends and family for one main reason. To quit using hard drugs cold turkey. No matter what, they can’t let her leave, no matter how much she begs and pleads, and makes up excuses. I think you know where this is going.

It turns out the unbearable smell is coming from the basement, which is full of dead animals, burn marks, and a book wrapped up in barb wire and trash bags.

Then you know. Shit goes down. 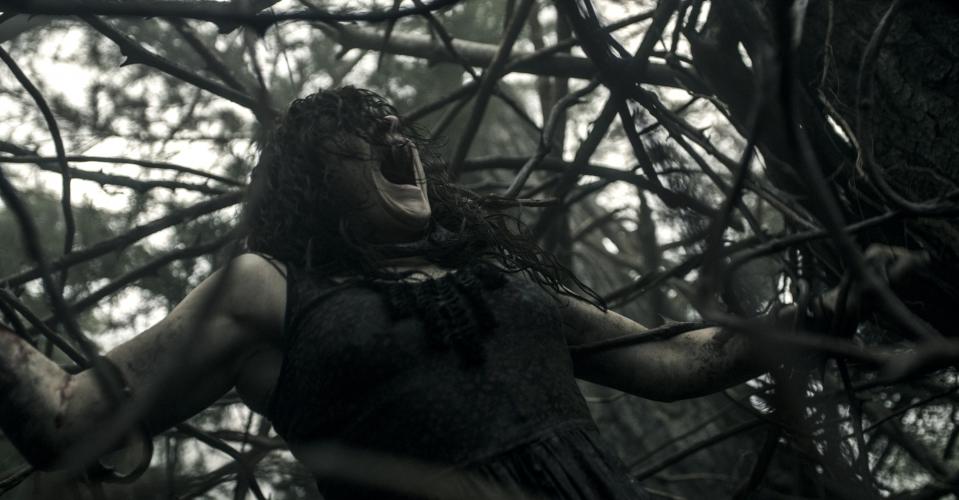 Hey! Do you like blood and gore and outrageous scenes of decapitation and demonized people? Well, hopefully you do, since you are thinking about watching an Evil Dead movie. I think this film has everything that the first film wanted to do, which is great, because it was the goal and all. There is some sick fucking shit in this movie, and I definitely felt uneasy, but hey, that’s the point of this movie.

I love that there is little to no CGI in this movie, and that all the effects are done with make-up work and prosthetics. It makes it feel more real, and thus more gross.

Certain staples in the first and second Evil Dead made it into this film too, but they were not used the same way. I loved that the film was able to keep me guessing as to how all the events would go down. Hell, even the trailer did a good job of not spoiling everything, although it did feature scenes that did not make it into the movie. Probably a good thing in my eyes. They might be in the unrated version of the film, aka the version that originally was given an NC-17. Yikes.

Right now the current rumor for the future of this franchise is between two ideas. This current updated version is probably in the same universe as the beloved 80s version, and will either have a sequel or be a trilogy. If it is just a sequel, there is rumors that there will be an Army of Darkness 2 starring Bruce Campbell, then a 7th movie overall connecting the survivors of this franchise with Bruce in a final final film. I personally doubt we see an Army Of Darkness 2 (see earlier comments on Sam Raimi), so I think they will do the trilogy route then have the 7th connecting film. But hey, we will see. They could make surprise me and make me as giddy as a school girl.

Did I mention this scared the piss out of me?