I remember Dolphin Tale just like it was years ago. An inspirational movie, for anyone who is a dolphin and who has lost their tail and thinks they can’t go on swimming anymore. It is based on a true story and I think used the actual dolphin in question. They just cheesed it the hell up and the actual true story was far more interesting than the melo drama the movie created. Just how it goes some time.

But now we have a sequel to Dolphin Tale. It is called Dolphin Tale 2! Presumably the Dolphin now loses a fin and they replace that too, right? Wait, this one is also a true story? Is there some guy just scouring the internet, looking for dolphin rescue stories just so they can make a dolphin tale movie? 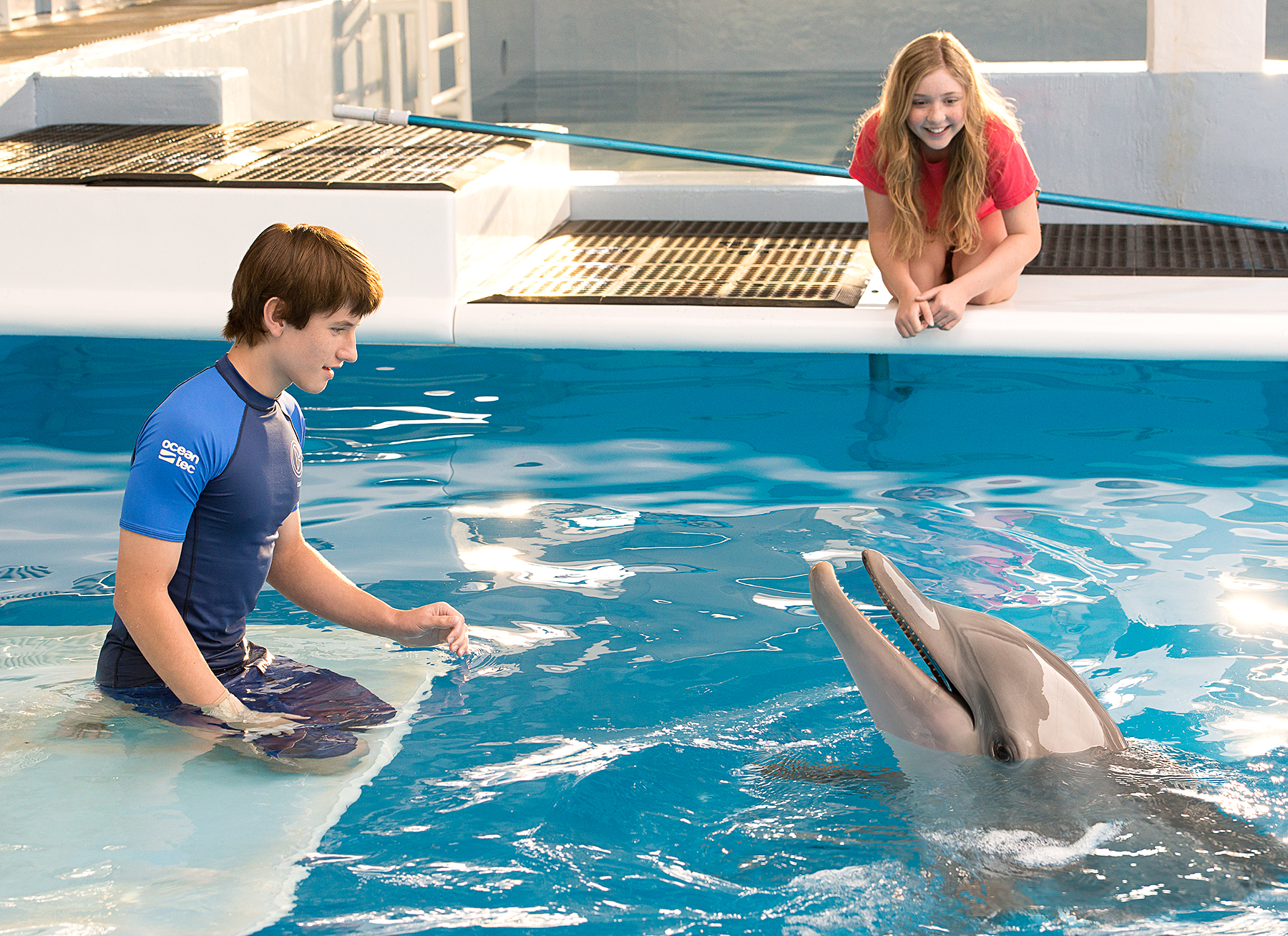 I’m hoping for the eventual reboot as RoboDolphin.

The Clearwater Marine Hospital, in the last movie struggling to survive, is now struggling to fit in so many people. They have classes, volunteers, real staff, they have so much goin on. They still want to fix animals and return them to sea, but they have some permanent residents that people want to see, like Winter. Yay fake tails. Winter lives with Panama, because of some vague rule that a female dolphin needs another female dolphin to swim or play with.

Well, Panama dies. Super old. They only have one other dolphin, Mandy, but Mandy is perfectly fine and it is their duty to return her to real life. For some reason, they have thirty days to find a new female dolphin to play with Winter, or else Winter will leave. If Winter will leave, so will their fat profits, because a lot of crippled people come to see her for whatever reason. Thankfully they get another shitty dolphin, terribly named Hope, who is a baby and didn’t get to learn how to live her life in the wild. BUT CAN THEY BE FRIENDS.

Also the main kid, Sawyer (Nathan Gamble), now in high school, is debating as to whether or not he takes a super free Semester At Sea trip, as a high school student again, because he is sad about dolphins.

I don’t care about her story, I just know her story gave us the shitty movie Soul Surfer.

The trailer for Dolphin Tale 2 featured an emergency vehicle showing up to the hospital with a dolphin, late at night, getting called Hope for some reason, and then a bunch of shots of people playing with dolphins, basically.

This scene takes place over an entire HOUR into the movie. Up to this point, we don’t get to the dolphin Hope or hear about her coming. It is all out of nowhere. IT TAKES AN HOUR OF SET UP TO GET TO THE MAIN PLOT OF THE MOVIE. Come on! So much damn bad filler up to that point. The worst of it being of course the angst of the kid throughout the film. Look. We all know he is going to take it. He would be stupid to not take it. It is completely bad drama filler for some reason, because obviously that part is based on no true story.

I think the only part of this movie that is the true story is that the CMH real life place got a new tiny dolphin named Hope. I don’t think they were going to lose Winter in any way, but they got a new dolphin in real life, so here is a new movie. That is what this movie has become and any future movies. They also had a Mandy dolphin that they released back and actually had a sick turtle.

Aka, normal life for a marine hospital. And now it is a pointless bullshitty movie.

The young people watched it too. They found it boring as shit. They got excited every once in awhile when dolphins were playing and that is about it. And because the ending featured a long drawn out cheering sequence, they were happy and cheering too because hey, something fun is finally happening. And then balloons. Either way, kids know this movie sucks for the most part too.