Divorce sucks. No way to sugar coat it. It breaks up families, people start having trust issues, children get fought over, you know.

There are some pros I guess. For the kids, they get two Christmases, and everyone knows that means more toys. And you don’t have to spend much time ever with someone you presumably hate!

But, in America, getting a divorce is actually very hard. From alimony to child support, from splitting of assets, to the legal code, it can get very confusing very fast. In fact, a lot of people out there seem to be making assloads of money over the break up of couples.

It isn’t a bad thing that people make money off of doing a job, that should be expected. What is unexpected is the lengths the entire system goes through to make sure your divorce hurts you in the wallet as much as possible. Which is really what Divorce Corp. is all about.

So what kind of shady shit is going down? Glad you asked. Obviously the documentary goes into extreme amounts of detail and personal anecdotes, so watch it for the full picture. 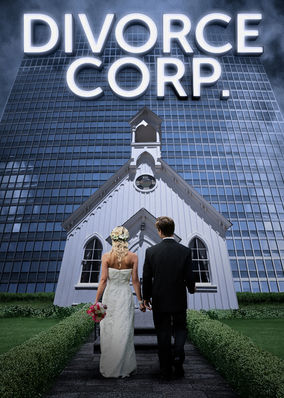 See? It is a giant office building behind a church? Fuck your subtle metaphors.

First of all, the family court law has gotten very complicated over the last few decades. It used to be relatively simple, but due to increase in complexity, for really no reason at all, it is basically impossible to represent yourself in court. You are basically forced to hire a lawyer regardless of how amicable your divorce will be. And of course, the divorce court lawyers can cost anywhere between 500-1000 dollars an hour.

If children are involved, Child Support isn’t a set in stone amount, it is based purely on the difference of income and how much custody the parents have. So, if someone has 100% custody, the other parent has to actually pay a lot more. This actively encourages couples to fight it out. Fighting it out makes the trial take a long time, which racks up the hourly fees, in order to earn money to probably just pay off your lawyer fees. The two lawyers probably know each other or are friends, and they both know the longer they take, the longer they get paid.

It is a shitty situation to be in. But that isn’t the end of it.

The court can appoint people to come in and monitor both households/parents. I don’t remember what they are called. These people have a fee as well, and the judge can force a couple to pay for them. These people aren’t neutral, can be friends with one firm, and can say whatever they want to make one parent seem bad. Of course, they have also been shown to accept bribes and more. Yayy.

These things are just the bottom of the barrel. I actually had to pause the documentary 20 minutes into it, sort of shocked with how fast and hard the information was coming at me. The whole thing is kind of disgusting and can make you just afraid of stepping outside.

Why only a 3 out of 4? Well, it is definitely dense and very detailed, but at the same time, it still just felt a bit one sided. Most of the anecdotes they showed have a lot of the “he said, she said” element, and for all I know, the people in these situations were bad. The evidence at times could easily have been hidden from the viewer.

Clearly the documentary has an agenda, and the agenda seems like a good one. But I feel like things can’t 100% be as bad as described everywhere. Maybe some parts of the country are just worse than other parts. Maybe. Hopefully.