Despicable Me 2 might make the most money out of any CGI movie this summer, so it is kind of a big deal. But does it deserve that money? 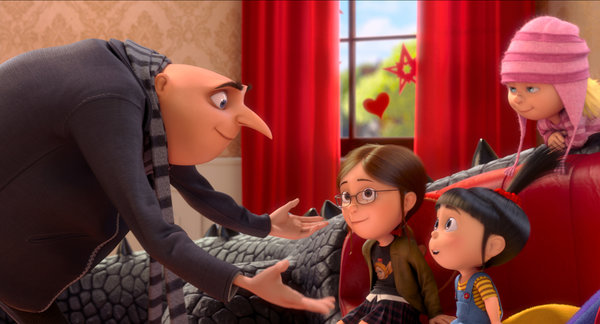 The kid vote does not count, damn it.
Despicable Me 2 starts us off soon after the first film. Gru (Steve Carell) is no longer a big bad villain because he has three kid to take care of, and he has had a change of heart. In fact, he has turned his whole secret laboratory into a secret jelly making factory, complete with free minion workers. With overheads that low, he can really make a splash in the market.

Unfortunately, the change in operation has left Dr. Nefario (Russell Brand) with no joy in his life, so he leaves Gru to pursue other opportunities. Speaking of pursuing other opportunities, Gru gets kidnapped by the Anti-Villain League. Silas Ramsbottom (Steve Coogan) wants Gru to lead an investigation on a disappearing arctic base that is researching chemicals that can cause ordinary creatures to become terrible beasts.

He would also get a new partner on the case, young and bubbly Lucy Wilde (Kristen Wiig). Oh yeah, she totally has the hots for him, too. This movie is mostly about Gru as a single dad and afraid to date. This provides many scenes of him avoiding the neighbors and awkwardly flirting with Lucy. Sure, maybe the world is threatened if this formula gets in the wrong hands, but love is also important.

Spoiler, he does not choose the well endowed blind date by the end.
Illumination Entertainment made the original Despicable Me in 2010, and is what they are most known for. That is because before Despicable Me 2, they have only made two other films, The Lorax and Hop, both ridiculous flops (and a bit terrible). So it makes sense they are already doing a sequel, and are releasing a spin-off titled just Minions in December 2014. What doesn’t make sense is how they have the rights to so many Dr. Seuss based movies down the pipe line, when they did so badly with their first chance.

Speaking of the Minions, did you love them from the first movie? They were arguably the best part of the first film, and quite cute. They have made sure that they advertise the fuck out of these minions for the sequel and eventual spinoff.

Basically, everywhere I look, there is a Minion based toy, gizmo, commercial, because “Hey, they are cute!” They recognize the best part, gave us a movie with potential for rich new characters, but then threw minions at our faces until we had to get new 3D Glasses. There is an overabundance of minions in this movie. They are in every scene, part of every plot point, and potentially in this movie more than Gru. It turns the entire movie into mostly slapstick based humor instead of witty jokes, which doesn’t help rewatchability or entertainment.

Basically I believe the main character is pushed out of the spotlight, similar to how Cars 2 was handled. At no point in the movie is he even considered despicable. In fact, he is rather admired and chased by women, loved by his family, and just a good guy. The plot is really straightforward, and you will figure out the main bad guy well before the reveal. The bad chemical itself was inconsistent with how it works, where it could have been fixed with a sentence of dialogue.

Long story short, Despicable Me 2 is not really about Gru trying to save the world from a threat (although he does that as well) it is more about Gru the single dad finding love. With minions. So many minions.