I am so disappointed in myself for taking so long to see Deepwater Horizon. I am a goddamn geophysicist. And teacher. And movie reviewer. But geophysicist first.

And you know what? The BP oil spill in the Gulf was bad, it was terrible, but at the same time, certain aspects were completely overblown, public opinion was driven from emotions and not from science, and blame was thrown around all over the place.

But reality isn’t simple, a lot of people were involved, and a lot of processes and safe guards went wrong or were ignored to allow it to happen. And yeah, it sucked. But still, it happened only six years ago and doesn’t seem like the type of film to warrant a movie at all. Some shit went wrong, and some environment got fucked up.

Are they going to celebrate it? Fear monger it? What is the message? These are the questions I will ask myself and why I want to even see the movie.

I can confirm from my many years as an alive person that this is indeed a drill.

The day began like every other day for Mike Williams (Mark Wahlberg). Hours of passionate love making with his wife (Kate Hudson) and sausages for breakfast.

Just kidding, he woke up, talked to his kid, heard a report on oil drilling, then left to go to his job for the next three weeks. He is on a crew on the Deepwater Horizon which is working on a borehole in the Gulf of Mexico. His boss is Jimmy Harrell (Kurt Russell), head of safety supervisor guy, and he is angry when they land, as the Schlumberger crew is apparently heading home early. They didn’t do all the safety tests!

Apparently because they are behind schedule, BP is getting impatient, and the people they sent to check things out (John Malkovich and James DuMont) are getting antsy. Needless to say, things get rushed, bad things happen, and a few people die in the process. 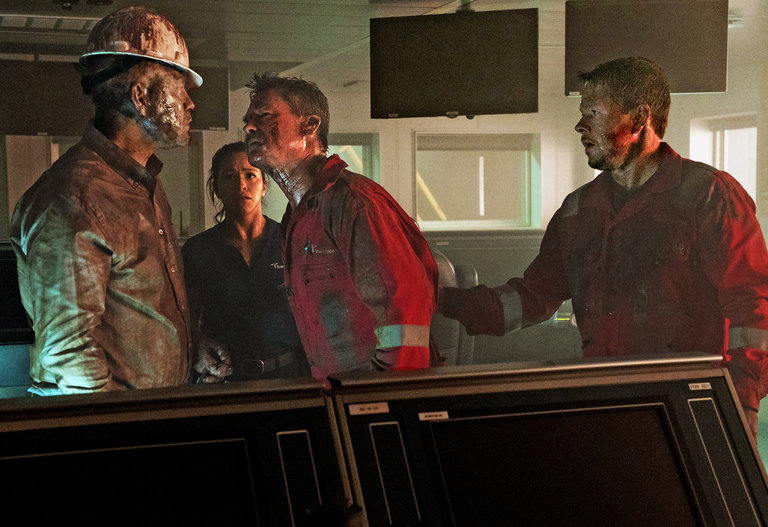 Not to mention they get about 10% more dirty than normal.

It turns out that this movie had a few things they wanted to cover. That people died during this accident, and to honor them with this film. Also that the main crews who were working were not to blame and the entire thing is BP’s fault.

And there is where some of the major fault for this film lands. It is hard to not have biases against films based on real life, and this one decides to run with the bias that the average American has taken. It is not using the film to right wrongs or tell actual true events. It is just telling us events based on what people want to hear.

Unfortunately, those biases cannot get out of my head and the film ends up taking a ding for that.

On its own, the first half of the film is interesting enough. The beginning is a bit corny, but the lead up to the events, the characters, they felt like a bunch of real people not just potential victims. They had their own voices. It is what really helps sell the whole film.

Deepwater Horizon is a strange event to make a movie about, has its moments, but also has its biases and excessive flair.