I really don’t think I can come up with a clever introduction to this review of Cuban Fury. Literally, no amusing anecdotes at all.

Well, maybe one. This movie is about a big guy salsa dancing. Hey. I am a big guy, and I was a big guy when I was on a Salsa Dance Team and a Ballroom Dance Team. I think I’d be able to relate to it very nicely.

I also like two of the three people on the cover. But I won’t tell you who is who. 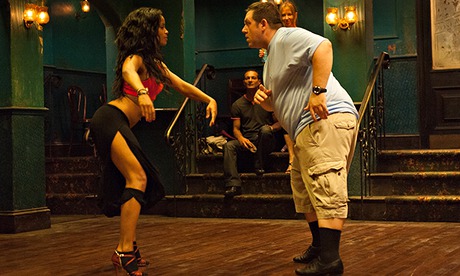 I think I literally own that exact outfit. Actually, both outfits.

Bruce (Nick Frost) used to be a great salsa dancer. He was arguably the best of the best with his partner, rising through the ranks and proud to be a dancer. Then he quit. He was getting embarassed. People made fun of him and he quit. What a kid.

But he is a bit interested in this person at his job, Julia (Rashida Jones). Just she is really pretty and he isn’t. He accidentally stumbles upon her at a Salsa class. SALSA. He can get back into form and do something impressive, she might like him.

Kind of very creepy, actually. But what is creepier is the other work mate, Drew (Chris O’Dowd), your standard dick, also is in to her and sabotaging Bruce and getting to hang out with her. But he is only an okay dancer.

Bruce might have the wrong ideas about why he is doing what he is doing, but with the help of his former coach (Ian McShane) and a very…intense man from a dance class (Kayvan Novak), he is able to relearn the steps he once knew. But more important, he is going to learn self confidence, trust in himself, and realize he shouldn’t be doing this to impress a woman. He should be doing it for himself. 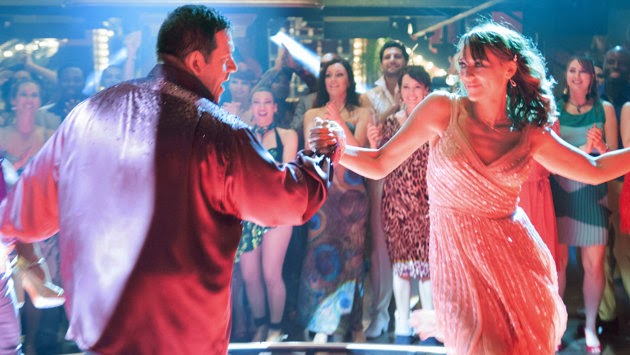 But hey look, he still gets her in the end. I guess.

Alright alright alright. The plot line is straight out of the 80s / 90s, yes. That is terrible. It is literally about a guy who is fat and ugly (personality wise too) playing the blame game and thinking he can’t do anything right. We should be past all these types of films. So that is why, despite the initial conditions, I was happy to find that it was more about his own personal journey and gaining confidence than winning the girl. Sure, that was a driving factor, but in reality by the end he knew he had to do it for himself and no one else. Yay some sort of moral!

But outside of that, unfortunately the movie didn’t have a ton going for it. It was an okay story and some okay jokes for the most part. There was one scene in particular that caused me to rewind the movie a little bit back, just to rewatch it again because it actually ended up being hilarious and I wanted to make sure I saw it correctly. That was great. If you see it, you will know the scene.

But you know. O’Dowd was a typical jerk, a lot of the plot was a typical underdog sports movie. It just didn’t have a ton unique going for it. Sad to say.

Oh well, time to ignore this one forever.