Circle Circle. Dot Dot. Everyone knows that is what you need to get your cootie shot. Except for my wife, who asked why I drew boobs on her arm.

No one wants Cooties. They are gross and carried by other gross kids. Fuck those asshats, trying to spread their germs on you. Or worse, COOTIES.

When I heard they were making a horror comedy about actual cooties and how the outbreak starts, I will admit I was interested. Zombie movies are trying very hard to be original now, so why not make a whole lot of kid zombies? That adds a new dynamic, morally and comedically, with lots of room for potential. It makes sense, if you think about it. Kids in general have potential, so Zombie Kids should have potential as well! 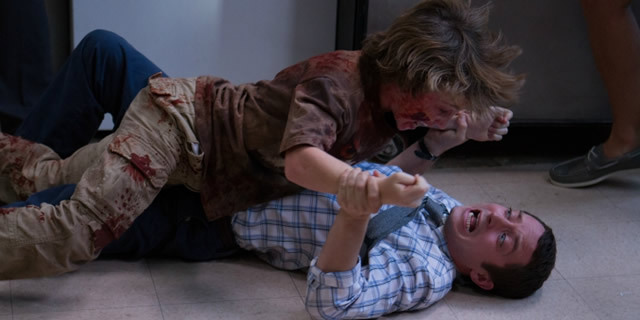 Although, with their shorter arms the whole thing just might be child’s play.

Clint (Elijah Wood) is a fancy book author who used to live in NYC. But times are tough, and he is living with his mother. It is the start of summer and he has lucked his way into a summer school teaching gig, as a substitute. Anything to pass the time, I guess. If anything it can get him out of his slump. He is trying to write a horror book about a possessed boat and he is only about a chapter in.

Needless to say, the kids at summer school are kind of dicks. But at least the teachers are mostly not dicks.

Well, Wade (Rainn Wilson), the athletic director is a dick. But everyone else is eccentric or fine. Oh hey, there is Lucy (Alison Pill), who he went to school with. She seems relatively normal.

Other teachers include people played by Jack McBrayer, Nasim Pedrad, and Leigh Whannell. And let’s not forget the crosswalk guard Jorge Garcia and the janitor Peter Kwong!

Anyways. Some sort of infected chicken nugget causes it all. Girl eats it, starts getting sick. She bites another kid, and soon, kids are running around the school, biting and attacking anyone in site. Fucking kid zombies.

As for some of the kids, we had Patriot (Cooper Roth), the biggest dick in the school, Dink (Miles Elliot), his lackie, Tamra (Morgan Lily), patient zero, and Calvin (Armani Jackson), a kid who didn’t get bit and gets to hang out with the adults! There was another girl that hung out with them, but I forget a name. And of course, Ian Brennan as the normally vice principal, but for summer, principal! He wrote the narrator of Glee. Here’s what you missed last time on Cooties: Fuck these little fuckers!

Cooties ended up being a lot more graphic and violent than I expected. Horror Comedy usually means a lot more comedy and horror is more of a sub genre. Like, “Oh yeah, there are zombies, so there is a horror element, but we are all just hear for the laughs.” No, the zombie kids end up being a bit scary and definitely very gruesome in their attacks on the teachers and parents at Fort Chicken. Add in the booming loud noises department and I was constantly taken aback. Yes, they made loud noises to scare you, and yes, that is lame. But they were still unexpected.

I actually had a mostly enjoyable time with this film. The banter in particular between Wood and Wilson was the highlight of the film, along with one of the teachers being ridiculously smart in biology out of nowhere. A lot of it however falls apart with the ending. They just don’t stick it. It is as if the writer/director didn’t know where to take the story. With only 10 or so minutes left, our characters were in a new situation. No real time to fully appreciate the situation, just enough time to showcase something cool and end with a cliffhanger.

The movie is also afraid to kill off the teachers. Anyone who seems to have lines is encased with plot armor. The kids lose any real scare when they turn into just things that run at them just as doors are closing. At least early on there was mass chaos, kids chasing other kids, teachers getting fucked over who were outside, etc.

Despite everything, Cooties was entertaining in ways I didn’t expect, and pretty decent on the joke department. I would watch a sequel in the future, should it happen, with some amount of optimism. But in all honesty, despite unresolved story lines, I don’t think a sequel has anywhere it could go that would set it apart from other zombie films.