I first saw the preview for Conviction on the movie Never Let Me Go. It also had previews for things like 127 Hours, Black Swan (which is acclaimed, despite my dislike) and Cyrus (which I will have to watch soon).

Anyways readers, help me out. Hilary Swank‘s voice. Does she always do accents? Is her voice just super…southern a lot of times? I looked up a Million Dollar Baby trailer, and it seemed similar to Conviction, and I don’t remember how her voice was in that. But in an interview, I couldn’t tell if it was weird or what. So let me know, does she have an intense accent, or is she acting it in all these movies?

To me her voice is almost as mysterious as her goofy smile.

This is another true story. Sam Rockwell goes to jail for a murder he didn’t commit in the 80s. Swank goes to school to get her GED then BA then Law Degree while being a single mother and divorcee. She eventually gets DNA proof of innocence, but still cannot free brother. More problems, more solutions, until everyone is happy. Yay! Just took 18 years out of the dude’s life, but everything worked out well!

Obviously Rockwell isn’t the focal point of this movie, he does a fine job, but it is all pretty much on Swank’s shoulders. More or less this is one of those “punch you in the face yet somehow you still keep moving on” movies, in her journey to freeing her brother from prison. I really didn’t think I would tag this actress more than once, but Ari Graynor, my favorite part of Lucky, played the daughter of Rockwell, that he of course never got to know. Her role was limited, but also great.

Usually with punch you in the face –> overcome movies you feel great at the end, as the character you begin to cheer for the whole time. This is no exception. It was well done, pretty much everyone played their roles appropriately. I was a little bit confused in the beginning, as it seemed to jump around, but this movie accomplishes everything it sets out to do. 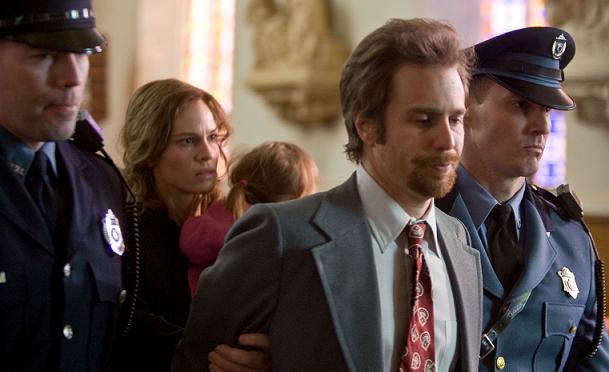 Oh yeah. He is innocent alright. Can’t you tell?

3 out of 4.
Tags:3 out of 4, Ari Graynor, Conviction, Drama, Hilary Swank, Sam Rockwell