Two things I assumed from the tv ads for Contraband when I first saw them in January.

One: With Mark Wahlberg, how does this look like anything but The Italian Job 2?

What’s that? I haven’t reviewed Armored yet? Then never mind. But still. The trailers made it look like some heist movie, similar to point 1. More so just a smuggling movie, and very little stealing going on. 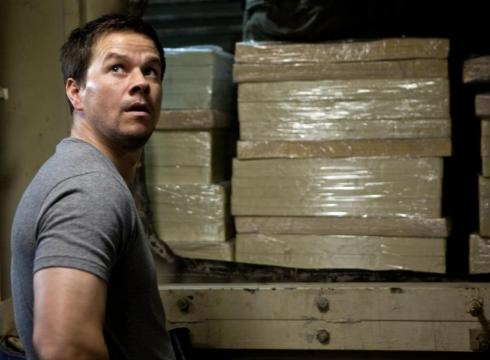 That is real counterfeit money right there.

Mark Wahlberg doesn’t do crime anymore guys. He is clean. But…when his relative gets in some shit with a local thug, he has to do another run. Smuggling is a dangerous situation. If the US Customs office checks the items you have to dump it and usually the sides are okay. But this crazy asshole, Giovanni Ribisi, doesn’t play games like that. He wants the money or the cocaine within two weeks or else his family will pay. Marky Mark doesn’t like that when he is married to Kate Beckinsale, so he agrees to go get the money.

But first, he leaves his friend and former illegal trafficker buddy Ben Foster, to watch over his wife and family.

So he has to get a crew back together, and get on a ship to Panama, captained by germaphobe J.K. Simmons. They mess up some stuff to get themselves time, to try and transport counterfeit money. But thanks to a lack of trust at home and other shit going down, they also have to help another heist happen and possibly take on cocaine and some other merchandise too. But if the customs gets involved again, can they risk dumping the cargo a second time while their loved ones are at home alone?

Never trust a thug who also looks like a rapist.

Ben Fosters character may not be as buddy buddy as you had assumed. But I doubt you assumed that. Look at him. LOOK AT HIM. He is never a straight shooting guy. Not even in X-Men The Last Stand.

I overall found it decently entertaining. About halfway through it I thought I was almost done with the movie though, didn’t expect to have “That much more” “plot” left to it. Mostly a lot of deception. Normally bad people get killed, but in this movies case, they all pretty much get arrested in separate ways.

I don’t like how unrealistic certain things were, such as Kate’s character. She got hit in the head so damn often, and its like nothing phased her. Must have a plate there. I definitely thought certain characters should have been dead, but “somehow” they weren’t and just unconscious or some bullshit.

I will give props to Giovanni Ribisi. Normally thugs are all tough guy, smack you around. But he is small and weaselly, and gave a different element to his fear mongering. I enjoyed that part the most.