Confessions Of A Shopaholic looked like a fun romp through fashion and credit debt. Pretty much the funnest things ever, like, omg, am I right?

I don’t expect to find anything profound with this movie (like credit debt is bad? excessive shopping is bad?) but hopefully at least I will laugh a bit and not find every situation entirely avoidable. I mean, if the character is smart at least. 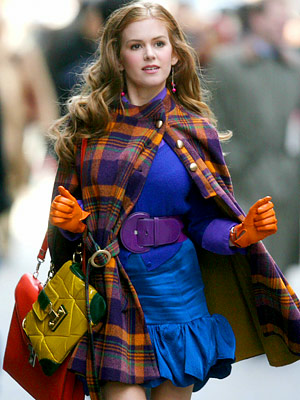 She looks like a fairy tale woman. Somehow in NYC she never gets mugged wearing stuff like this all day.

Anyways, the lesson you are supposed to learn is the difference between price and worth. But they say that a lot, don’t worry.

Isla Fisher likes to shop. She works at a garden magazine, but wants to do fashion! Loves credit cards, but has a problem paying them off. She even lives with her best friend, Krysten Ritter, and her boyfriend, and they all seem to help her avoid the creditors. Her parents (John Goodman, Joan Cusack) tried to teach her to value money and shop at thrift stores and saved up, but their hippie ways failed.

So she tries to work at a fashion magazine, but the only magazine owned by the corporation with an opening is the financing magazine, lead by Hugh Dancy. Despite a bad interview, she gets drunk and sends a letter to the fashion people with a sample article about worth, and hate mail to Hugh, but gets them mixed up. Congrats! She now has a job with a finance magazine, despite knowing close to nothing and being 15k in debt.

When she eventually gets an article published, it sky rockets as the next best thing. The owner of the corporation, John Lithgow, personally loves it, and so does the fashion people. Including some famous fashion person, played by Leslie Bibb. But she is a villain in the movie. So is Robert Stanton, a “mean old” debt collector who she is avoiding throughout the movie.

But will everyone realize she was lying the whole time, like he has been her whole life? What can she do to fuck up her friendships too? Can she bang the main editor, or will Bibb beat her to it? 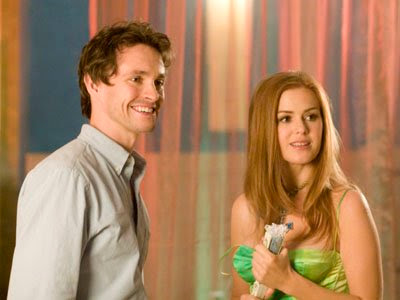 In the ‘zine world, sleeping with your employees is fine.

Let me be detailed with why I dislike the movie now. Hooray!

1) All of her problems are easily fixable, and by never thinking they escalate. And yet still even after initial escalation, they are still easily fixable. By avoiding her debt collector, she sets up for him to go to drastic measures to catch her attention. By not telling her work, she sets up a big fall. Well, despite being a finance magazine, it didn’t mean she had to be good at paying bills.

2) Her friend got mad at her, because she lost the bridesmaids dress to a thrift store, and a homeless lady was wearing it. How? Because of the shopaholics meeting the friend made her attend, not from unwarranted spending. No reason for them to be mad at each other, as it wasnt Isla’s fault.

3) There was a tape to stop being a shopaholic, and involved throwing out all the excess. Well she didn’t. Guess how she raised her bill money?
By (gasp) selling a lot of her shit back. HOW IS THAT NOT THE MOST OBVIOUS THING EVER. You will be mad because that is clearly the right thing to do, and pays the bills, and good to go. But she keeps trying to throw it out, despite the debt? Dumb as shit.

4) Why the hell is the debt collector a villain? She pretty much stole from these companies for months and continuously lied to them. Yet she “gets him” at the end? That is some bullshit. Accept responsibility and pay your bills with class, please.

And you know, also weird messages about giving up on your dreams, and accepting the simpler things in life. Blah.