Possibly the most hyped movie that is coming out this week (Versus things like Warrior, Dolphin Tale, and Margin Call), Colombiana seems to be about one thing. Money. 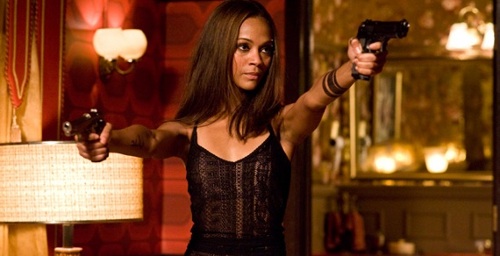 And how to get more of their monies.

The movie starts in, you guessed it, Colombia. Guy runs into his house, people are coming for him! So he gives some things to his little girl, letting her know to not give up the item, and some other instructions. They die, right in front of her, yet she doesn’t run and hide. Instead she eventually escapes, despite being like, 7 or something. She then makes her way to Chicago, from Colombia, and finds some uncle, Cliff Curtis, who takes her in and just seems to “know”. She demands that he trains her to be a killer.

FIFTEEN YEARS LATER. In 2007. Zoe Saldana now gets to be in the movie. Get to see her be all sneaky assassin like person, breaking and entering into a prison just to kill someone. Whattabitch. She is doing this to try and get the guy who killed her parents to take notice and come to the US. You know, because the guy she killed was important to him. While doing this, she has a boyfriend who knows nothing, and the FBI are on her tail lead by Lennie James to stop her. Guy sends another assassin after her, Jordi Molla. People die, trust is betrayed, and Zoe exists.

I found watching this movie to be pretty ridiculous. Thankfully she wasn’t fighting toe to toe with everyone, or else it would have made me hate it more. Zoe is VERY small, and can only suspend belief so much. I think she really only does that once, and most of her kills are secrets / from behind. (Aka, without Honor? But this isn’t Ancient China or Revolutionary War or whatever).

But what really bugged me is the bad acting, bad plot, and gratuitous T&A scenes. It probably has one of the more pointless “Hey lets get our main star in a shower” scenes, that even shows a nipple, which is generally “no no” for a PG-13 movie. 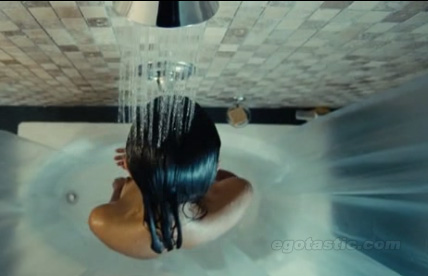 Alright, I didn’t expect to see this picture available. But hey, there ya go.

Maybe. Just maybe this movie is secretly parodying other “action movies with women” in them. But no one knows it is a parody? Maybe. That is the only way to explain the amount of times that she gets naked, how awkward the dialogue is, and how robotic it all feels. Fights scenes don’t even look natural, just extremely choreographed. She doesn’t have any special powers or anything, its just training from an uncle.

But to me, this just doesn’t work at all.