Skip to content
HomeUncategorizedCloudy With A Chance Of Meatballs

Hooray! Another Super CGI movie based on a kids book. Only remotely of course. At least this kids book had a real plot, so making a movie made sense, unlike some others.

Fingers crossed that Cloudy With A Chance Of Meatballs is more than just a random kids movie! 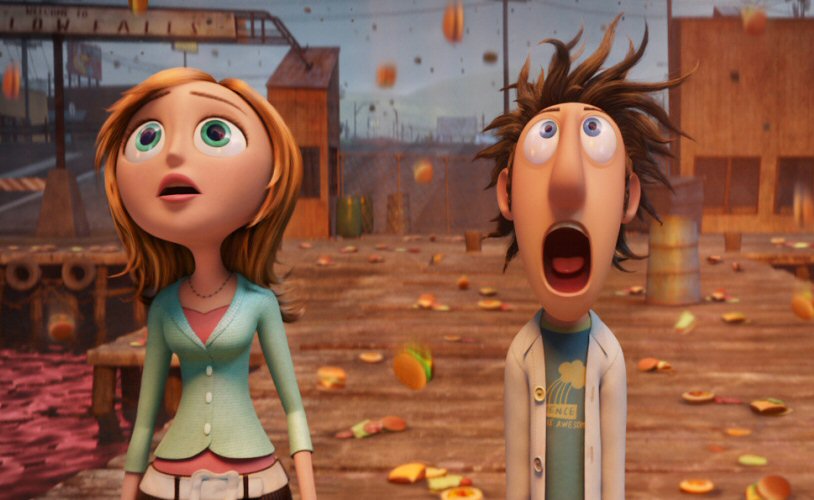 Although it might be his goal, dude should watch out. Burger might cram itself right in that mouth.

Flint Lockwood (Bill Hader) is a scientist in Swallow Island, or something like that. But no one likes his inventions, think they all suck! Like Spray on Shoes. But he also just makes a mess. Well, while he was a kid the local sardine can factory went out of business, meaning the town lost its prosperity. They then had to pretty much eat only sardines because of no tourists. His dad (James Caan) doesn’t really approve, show little emotion, and has the most killer moustache / unibrow combo ever.

Well no worries! The mayor (Bruce Campbell) and the Sardine factory mascot (Andy Samberg) are opening up Sardineland to get tourists and prosperity back. But after a tussle between Flint the local police guy (Mr. T), his new invention that turns water into food (kind of sick of sardines) blasts off into atmosphere…and destroys most of Sardineland. Unfortunately this is all also reported on a national weather news channel, by Sam Sparks (Anna Faris), so they are a laughing stock agian.

But eventually, burgers rain from the sky. Everyone is happy! They taste so good! But can it be repeated?

Yes. It can. 3 meals a day (or more), and everyone can be happy! Not the dad though. Thinks it is wasteful. Oh well, scientist becomes the talk of the day. They change the town to ChewandSwallow (from the book) and people even start to like his monkey (Neil Patrick Harris). Blah blah, eventually bad things happen, have to fix, learn lessons, also junk food is bad. 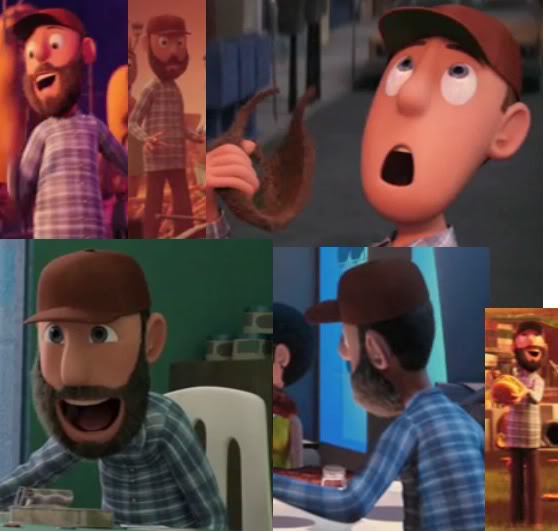 But the coolest person in the movie is this guy, Joe Towne. He is in almost every scene (small town?) and pretty hilarious. Voiced by Will Forte, and he deserves his own spin off.

So the plot was predictable, more or less. Morals and what not. The first half was a bit better than the second half (which seemed “too long” post disaster). But the dialogue was killer. A lot of the lines in the movie are hilarious. A movie parents wont also mind watching. At one point when he makes it snow “ice cream” and has admitted he has never been in a snowball fight. So once he figures it out? A great scene of him destroying so many kids right in the face. Hilarious.

I laughed a lot more than I expected. Not just at Flint’s inability to be social, but they made fun of a lot of things, including normal disaster movie tropes. Also, cutscenes when he was doing “Science!” were very well done indeed.