I apologize. I have been doing mostly main stream movies lately. My only weird outlet has been in terms of documentaries, which also have been pretty standard lately.

But no, I need to take time every once in awhile to do something weird. Those indie and low budget movies you haven’t heard about. Which is why I picked Circle today. I heard about it a few weeks ago, and since I could remember the title, knew it was weird, and it was short (hey, I have time crunches some times), it was the perfect movie to review. 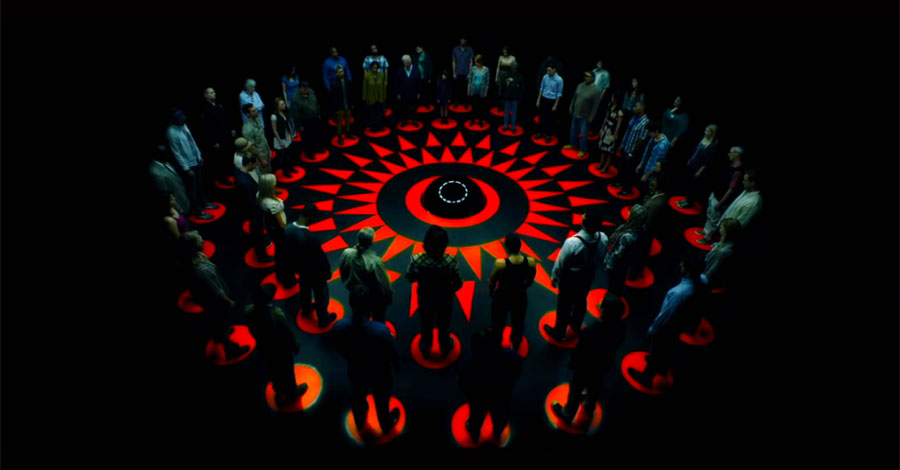 There is a African American man (Coley Speaks). A husband (Matt Corboy) and a wife (Julie Benz). A rich man (Daniel Lench), a pastor (Kurt Long), and a Bruce (David Reivers).

Every few minutes a deep thumping sound occurs from the center, and sure enough, a lightning beam shoots out of it and kills one of our fifty participants. Fuck. Don’t worry, you won’t get piles of bodies, they get whisked away, somewhat magically into the darkness around the room, never to be seen again. Turns out if you leave your circle or touch people after the warning, you too get shot and killed. Definitely a rough life.

There is a bearded man (Kaiwi Lyman). There is the first man that talks (Kevin Sheridan), and a silent man (Muneer Katchi). There is a college kid (Carter Jenkins), an atheist (Rene Heger) and an Eric (Michael Nardelli).

Oh see those arrows? Turns out if they turn their hands, the arrows light up around the room and only they can see their arrow. Turns out they get to vote on who is the next to get killed every time the thumping starts. Now things get interested. Who do they decide to kill? What happens when there is a tie? Does the last person alive get to leave? What if there are two people left, do they tie and both die? Fuck.

There is a soldier (Jordi Vilasuso), an Asian kid (Lawrence Kao) and a lawyer (Michael McLafferty). There is a pretty girl (Sara Sanderson), a tattooed man (Cesar Garcia) and a lesbian (Mercy Malick).

There is a cancer survivor (Lisa Pelikan), a one handed man (Zachary James Rukavina), a pregnant woman (Allegra Masters) and an 11 year old girl (Molly Jackson). 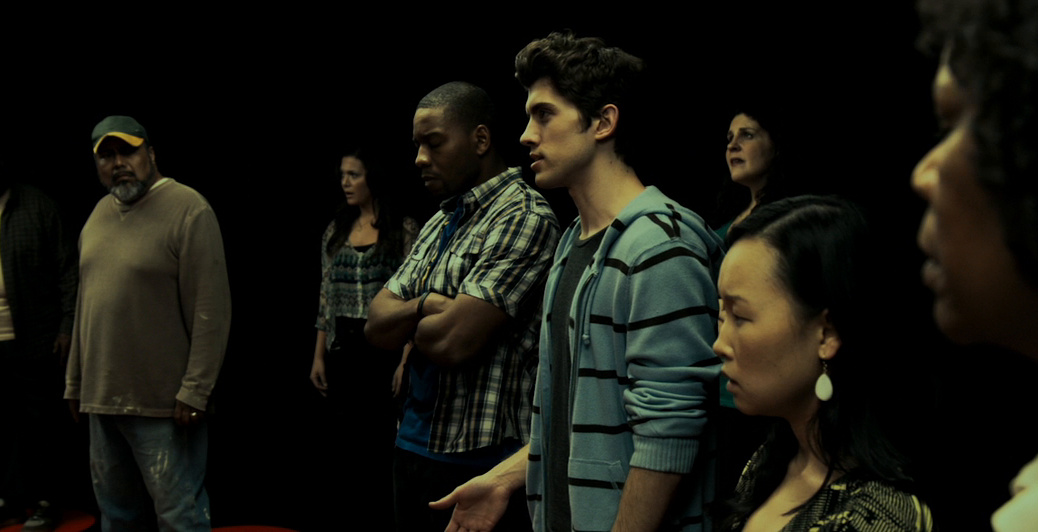 I do love me some psychological thrillers. I also love me some movies that take place for the most part in one room. I also love me some dialogue based movies. Needless to say, this movie has them all. An interesting premise, a constant guessing game who is going to die, and lots of arguing. Everyone is talking to save themselves, but some people get caught up in the moment. You can see several games and plans characters have to ensure their own survival, and it is wonderful. I also definitely enjoyed the ending.

There is one bad thing, technically. The acting. There is a lot of people involved, so it is all over the place. A lot of it is kind of shit. But I forgave it for the nice concept and story.

Honestly not much more I can say about this one. Under 90 minutes, on Netflix, and a nice way to spend the evening. Unless you aren’t into slightly weird shit.