1350 may be the least significant number in human history that is divisible by 50. Maybe. But it is my number and that’s why I like it.

Because today is my 1350th movie review, meaning it is time for another Milestone Review! I have now switched to the format of “Well known bad/awkward movies” from the past 10-15 years. And hey, maybe they aren’t actually that bad! Maybe they weren’t given a fair shake.

Maybe. And this is double exciting, because it is Yay Women Week, so I am able to showcase something like, Catwoman, and have it fit a theme and be a milestone at the same time. Literally the best.

But also, I am doing this because of regrets. This should have been my last Milestone Review. I ended up reviewing Sky Captain and the World of Tomorrow last time, on a week full of movies that only had 1 word titles, all beginning with C. Jeez. I dropped the ball on that one. 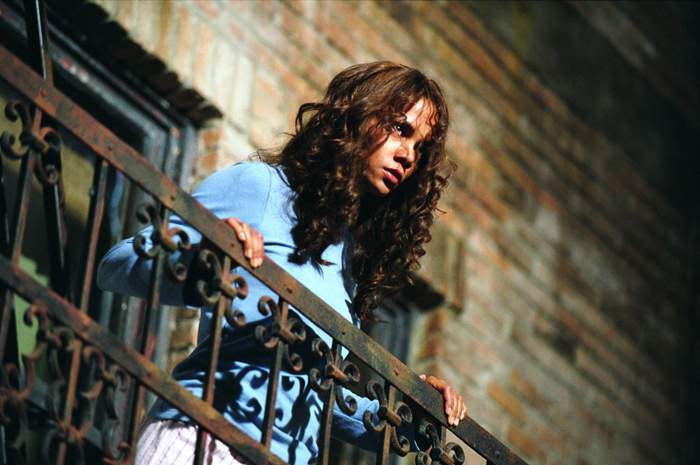 “If I was a cat, I would never drop a ball ever again…”

The movie begins with our “hero”, Patience Phillips (Halle Berry) dying and drowning. This is alledgedly also the day she finally started to live. You know, one of those movies that spoils some shit.

So instead leads go back to before and man, Patience really really sucks. She is a graphic artist for a make up firm. Really good it, but a beta bitch so she doesn’t try for much. She has a friend, Sally (Alex Borstein), and I am honestly already done talking about her.

She is a Meek little woman. For instance, she will mumble at people across the big ally to turn off their music. Mumble at them to stop and then get all sad when they don’t.

She works for some place called Hedare Beauty (yawn), and they are going to release some new skin cream, Beau-Line (bigger yawn), which can reverse the effects of aging. Allegedly. That’s right. This movie is about fucking skin cream.

AND CATS TOO. Jeez. We will get there guys. Calm down.

Needless to say, there is something weird with this skin cream. Apparently if someone stops using it, they will start to eventually develop huge rashes on their face. Clearly the solution is to never ever stop using this skin cream. Problem solved. Dr. Ivan Slavicky (Peter Wingfield) wants to pull the plug on it, BUT NO. THE HIGHER UPS NEED IT TO HAPPEN.

Somehow, Patience gets lost trying to turn in a presentation update and finds herself in the factory with the scientist and overhears the negative effects of it. Great, now they have to kill her. Not really seeing her, they rush to kill her anyways. She escapes down some big tubes, which they “flush” out. And of course this involves filling them completely with water and going over a cliff HUNDREDS of feet into the air into the ocean. If anything, this company should be brought to justice for their clear inability to not pollute the ocean at extreme levels.

Either way, she washes up onto the shore and the cats start surrounding her and meowing at her with extreme prejudice. And you know. she comes back to life. 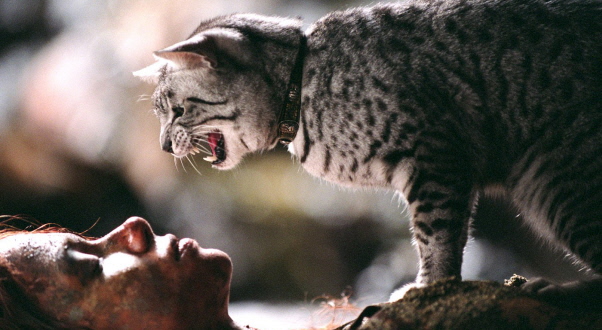 You may be wondering why the cats did this. Well, it turns out they tested her earlier on in the movie, and it took twenty minutes to get to this scene. But I wanted to hurry and get there. The cat in the picture, went to her apartment and went on a dangerous part of railing. For whatever reason, Patience went out to try and save her. In reality, it looked like she just wanted to jump. Which is how she met the cop, Tom Lone (Benjamin Bratt), who a character I won’t talk about anymore calls a “Man Sandwich”. saves her instead. Aw, true love maybe.

But also, we all should realize there is no way that man should be considered the most attractive man ever.

Either way, back to the cats. They gave her cat powers. You know, a love of milk and fish. Jewels and shiny thigns. Apparently the ability to climb really well and some dexterity. Magical cat shit.

She even follows one and finds out they belong to our resident crazy cat lady (Frances Conroy). They thought she was worthy of their cat powers, and have been doing it for thousands of years. So hey, she can be the next Catwoman. Or something. 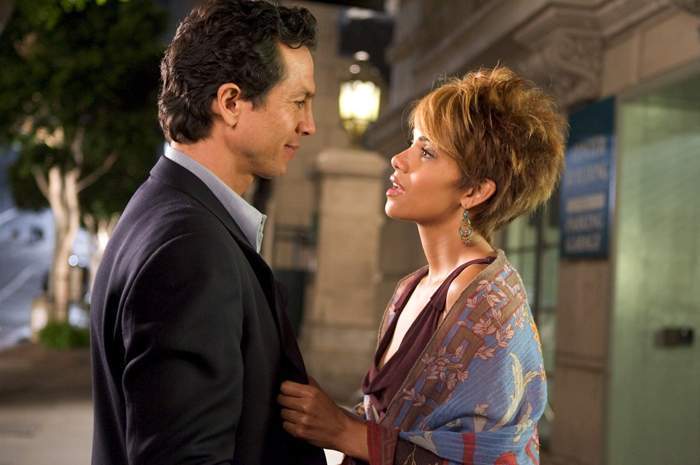 The cats also convince her to cut her hair and be more daring!

Either way, Patience loses her job for reasons, so starts doing whatever she wants. That is apparently stealing jewels and stealing hearts. You know, she goes into a jewelry store to steal stuff, all cat like in her new leather outfit, and OTHER CRIMINALS ARE ALREADY STEALING. She is all “What a PURRRRRFect idea!” because she hates the viewers of this movie.

She also wants to get her dating on. You know, with the cop. So they do fun date things, like volunteering at youth areas. And the kids might demand things of them, like watching them play one on one.

ONE ON ONE BASKETBALL. LET’S ALL WATCH.

Did you watch? You better have. Only two minutes. It is probably the worst scene of the movie, which is full of these. They basically have awkward feel up moments on there. And the scene is full of bad music and quick cuts, but the music only gets worse and the cuts get even quicker the rest of the movie.

Hell, now she has confidence to break up the party across her ally! And she is wearing leather, well, even LESS leather than before. And motorcycles!

Sickest basketball moves I have ever seen.

Now that Patience has found out that less is more with her outfit, she goes night clubbing to find the first guy who tried to kill her in the factory to get some revenge. And she discovers a whip, and she is good at using the whip to beat his butt! Hooray!

But let’s get back to romance. They go to the carnival. And hey, the ferris wheel starts to break while they are on it. Good thing hunky cop can climb down to try and stop things, and Patience can sneak down and save a kid with her cat-abilities.

Their romance works out fantastically. So that is good news.

But hey back to the other plot. Evil corporation owner George Hedare (Lambert Wilson) and his wife, Laurel (Sharon Stone) are having marriage problems. She used to be the face of the line but she is getting old, so there are new younger girls. And he is probably cheating. Catwoman thinks she can trust Laurel because she is mad and has helped her get details on the bad people. Turns out, Laurel was just framing Catwoman. How so? Well, Laurel decided to kill her husband because she wants to own the company, wants to get rich and get back at him and also, fuck Catwoman. Amirite?

Oh yeah, not only does the framing pretty much work for putting a bad spin on Catwoman, but her cop man figures out the connections so Patience totally goes to jail. 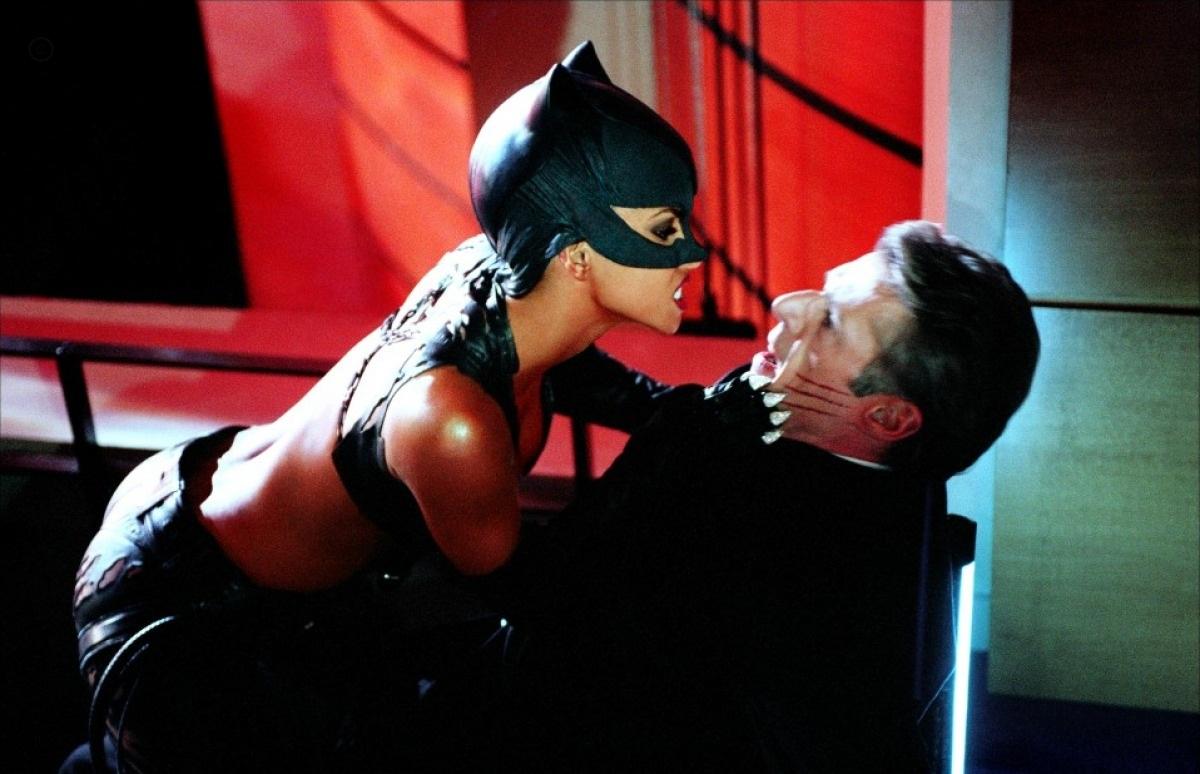 I am sure at some point she is breaking some public indecency laws tto.

Needless to say, everything is about to hit the fan. She is jailed, the company is about to release bad skin cream, and she is in jail. Somehow she is able to convince the cops to let her go and investigate the company. Well, that is good news.

So Catwoman goes back to the factory, wanting to find evidence to shut it down before silly women everywhere get rashes on their face, or worse. You know, they actually get the benefits of the product and Laurel gets filthy rich on them. Before I talk about the ending, let’s look at another Catwoman pose. 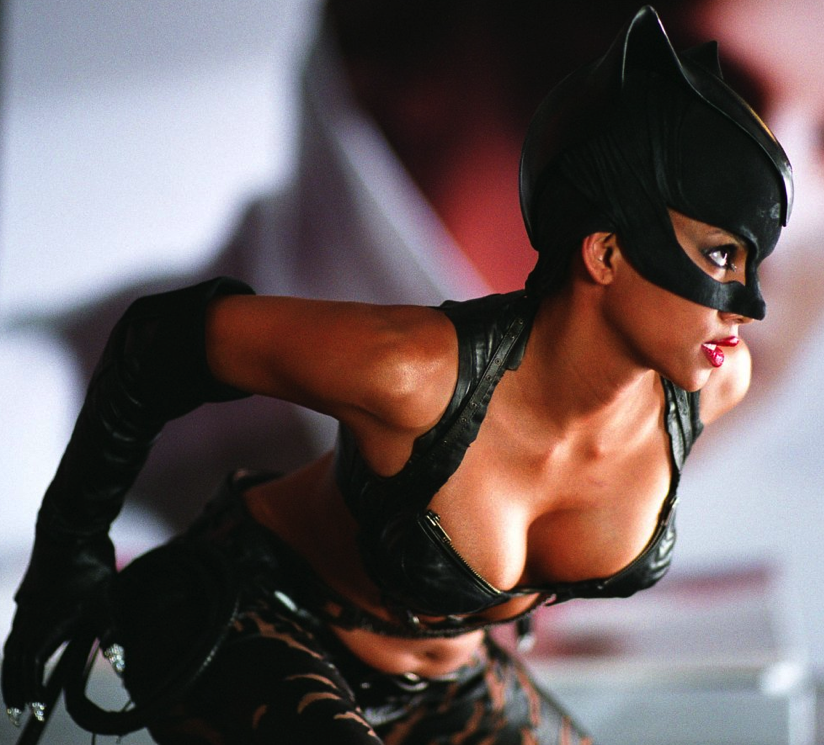 The pose makes it so she can pounce, bite, and bat at yarn.

Guess what, it turns out Laurel has been using the project almost forever. Well, longer than any test subject. So her skin has actually kept the youth but also is as hard as marble. Yeah. Bet you didn’t see that one coming. Now Laurel and Catwoman can fight without it just being an awkward gun fest. No, the cop can handle the gun fest. Instead we get our Catwoman scratching and clawing Laurel and not really leaving a mark. Because you know, Marble.

Seriously. The main villain gets to just be a rich woman who has hard skin and is kind of mean.

Guess who dies during the fight? Yeah, of course, Laurel. She gets a bit scratched up, and almost falls to her death, but Catwoman tries to grab her hand and save her. Too bad Laurel sees the scratch marks in a reflection, is so disgusted by her outer looks, that she shrieks and falls to death. Not a normal fall, but into a neon light thing, allowing her to fry up after the fall as well.

So Catwoman gets cleared of all charges and decides to become a good guy super hero! Just kidding, fuck the cops, she just wants to do what she wants to do. So yah. End of movie. Catwoman will now no longer roam the streets until she appears in The Dark Knight Rises, completely unconnected to this movie. 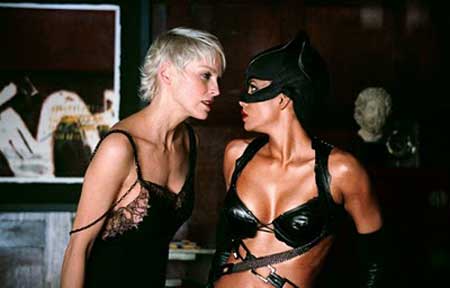 In case you missed it, the film ends with a cat fight.

This review gave this film way more courtesy to the plot than the actual screen writers must have done. It took only four minutes or so into the movie before I had already hated it, and I still had 100 minutes to go. Things were not looking great.

I couldn’t even get through the basketball scene without pausing and taking a nice break. Even if it is the worse scene, the other scenes were not much better. The last time I have seen that many quick and headache annoying cuts, it was thanks to the film Getaway (which honestly might have been worse in that department, but I don’t want to throw up again just to find out if it is true). The puns weren’t even enjoyable puns.

The ending was atrocious (Word of the day, sorry), and of course the CGI was bad. The movie came out in 2004. Almost nothing good came out in 2004 in terms of CGI. Outside of Harry Potter 3. Spider-Man 2. The Incredibles. Oh okay, no, it was just bad shit thanks to whoever made this movie.

This film single-handedly ruined Halle Berry’s future. She had the occasional spark after it, but nothing that would get her into any award territory. Let that be a lesson for everyone. Catwoman is terrible, and can kill your job.