Case 39 is a movie I easily walked by hundreds of times before giving it a chance. Why did I give it a chance now?

Boredom, mostly. The cover is boring. The stars aren’t my favorite. I just never cared about ever seeing it.

That is until I found out that Bradley Cooper was in it. Okay, fine, let’s do this. 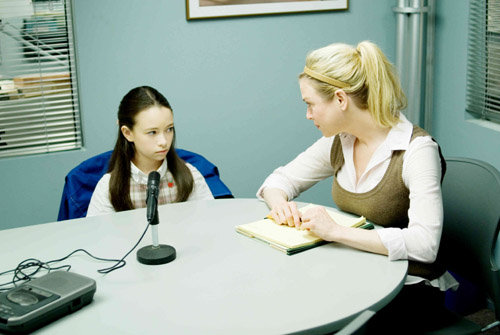 Neither of these two people are Bradley Cooper.

Emily Jenkins (Renee Zellweger) is a…social worker! Ah yes, social worker, of course. She is pretty full on her schedule too. She works on child neglect things around the city. In fact, she already has 38 open cases! But her boss makes her add one more. Let’s call it Case 39. Great. Fine.

Well, she goes to the house and finds out it is very strange. Lilith (Jodelle Ferland) is starting to do bad at school and her parents are strange. She is a little bit worried about her safety, so checks in her at night a little bit later and finds her parents trying to burn her alive in an oven. Oh shit! They be crazy! They get locked up and she needs a home. Lillith wants to be adopted by Emily, but that is ridiculous.

Too bad it happens anyways. Weird things start to happen. A few weeks later, another of her cases ended up killing his parents. Whoa. Serious business. But the detectives also find out that before it happened, the kid received a phone call from Emily’s home. We all assume it was Lilith, so she gets some of that psychiatrist talk from Doug (Bradley Cooper!!) to figure out whats up. Then Doug kills himself later. Whoa.

Does Lilith have some power over people to cause them to kill themself? Is she just mentally fucked up and brings dismay to others? Or is she secretly an evil demon in a kid body brought to bring torture to everyone around? It could go either way. Straight demon horror film, or psychological thriller. Also there is a detective to help figure out whats up with Ian McShane.

Put that kid in an oven. Kids love oven.

Spoilers? It is totally a demon. They give some hints that it might not be something supernatural, just a disturbed child. Too bad, we get a demon kid movie. She also goes full demon by the end. It is very confusing at what her actual purpose is in this film. It is very irrational, and I have no idea why she even pretends to be a kid instead of just going on a demon rage.

Unfortunately, this film was pretty boring. The psychological route would have made it better overall, with a lot of people slowly going crazy, and that poor kid being in the middle of it. Misery does breed misery. That would require better writing, but it probably would still only be a 2 at that point. The beginning of the film was interesting, but as soon as the social worker decided to foster a child, that clearly interfered with the job, I lost all hope that the movie would be interesting. Sucks to suck, Case 39.