Caffeine is now my oldest review (outside of Cars, but that was a special occasion. That message NEEDED to be said). But man, 2006? I didn’t know! I assumed it was 2007, I promise. 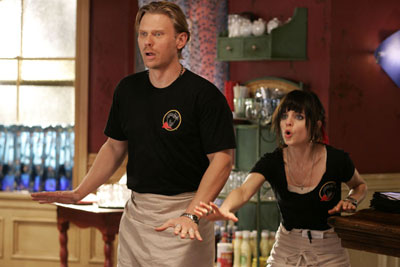 This is a normal food service industry like movie. Except instead of just the workers, there are three groups of tables that also have fleshed out stories throughout the brunch hour. Thankfully it isn’t the whole day of the restaurant. So unrealistic!

At the same time we have Mena Suvari, with her crazy grandmother to care for, Breckin Meyer, too busy wondering if his existential novel will be published, and Mark Pellegrino (Jacob from Lost), who seems to be the only one really working.

Even with those better stories, there are also a few customers there just for one scene.

It is super hard to find images from this movie.

Best movie ever? Far from it. Was it entertaining? Sure!

I didn’t regret or hate watching it. But it does feel short. Some of the story lines weren’t as good as the others, and the ending was predictable. Some also lame joke scenes. If you had to compare this to the humor in something like Waiting…, Waiting… is vastly superior (and older), but doesn’t mean this one is bad. Just means it is okay.

Also, people who aren’t British are doing British accents. I am still okay with this.