You gotta shoot ’em in the head. It is the only way to be sure. It is definitely a great statement for anyone who finds that they are stuck in an action movie or video game! Bullet To The Head takes that message and runs with it, basically making a whole movie around that simple(?) life rule. 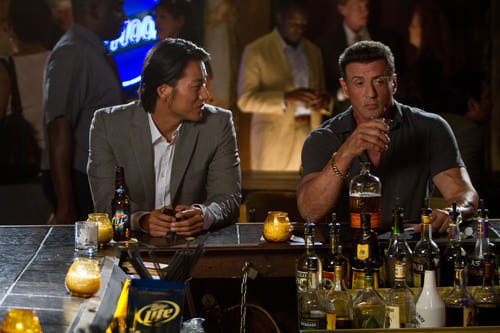 Another is to always bring your own booze to the bar.

Our “hero” is named Jimmy Bobo (Sylvester Stallone) and — hey, wait, no, come back here. Yes his name is stupid, but let’s give him a chance. He isn’t really a hero, he is a hitman who has had problems with the law his whole life, all over the country. But now he lives in New Orleans, and just completed a job with his partner Louie (Jon Seda). But when they go to get paid, it is a set up! Louie is left dead, and Jimmy is left mad.

Turns out the guy they killed was an ex cop too. A scum bag, but still former cops have former partners, and his is Taylor Kwon (Sung Kang) who has flown in to investigate. But all he can find on his own is Mr. Scumbag up there, who shoots more people in the head than there are provinces in Canada. These two drastically different individuals have to team up to get retribution, but it will be pretty hard when they can’t stop shooting each other as well.

Also starring Christian Slater and Adewale Akinnuoye-Agbaje as the bad guys, Jason Momoa as hitman, and Sarah Shahi as the daughter. 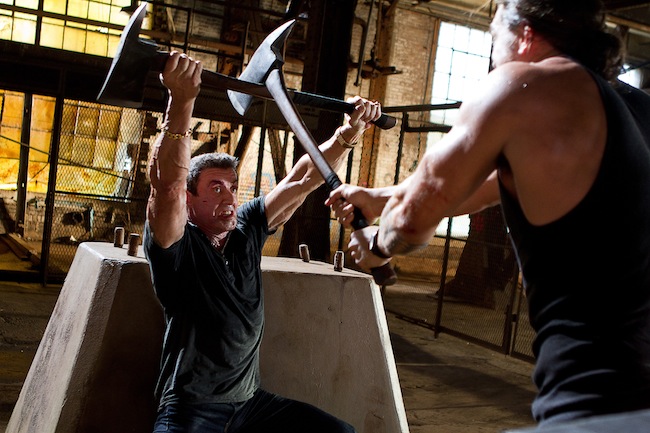 Surprisingly enough, Bullet To The Head is based on a french graphic novel and not a dream by Stallone. I had a lot that I disliked about the movie, and found them exemplified by what the men in charge had to say about it.

“[This] is exactly the type of fast-paced, universally themed project that suits our business model” – Production team. Unfortunately, the movie felt pretty slow. An awful lot of time was given to a plot that wasn’t good, meaning tons of downtime in between fight scenes. Half of these “plot scenes” consisted of Stallone being racist towards Kang. Fun fact, the graphic novel had a white guy, but they brought in Kang to appeal to a wider audience, so all of that specific acist dialogue was just for the movie.

Stallone had enough control over the movie to fire the original director because the director’s version of the film was darker than Stallone had wanted. This left us instead with a strange action movie (that had no problem killing/exploding dozens of men) with Stallone trying to be funny while transitioning between fights. Too bad the humor didn’t work for the most part.

Aside from that, there are other problems I had with the characters themselves. Adewale was a land tycoon, who claimed to never trust people who didn’t do things for money. Those are his last words, as he yells them to a man who is actually killing him (gasp) for the money. Completely nonsensical.

I actually liked John Momoa as the other hit man. His actions didn’t seem to fit his character description, but at least he had interesting fight scenes.

I found myself laughing more at the ridiculousness of scenes that were supposed to be serious, and fighting off sleep during the rest of the film.