The first thing I thought of when I saw the cover for Brake was of course the movie Buried. Both movies feature basically only one person, trapped in a box unexpectedly, and want to get out.

You know. Because who wants to be in a box?

Buried, features Ryan Reynolds, under ground in a coffin, with a cellphone and a lighter.

Brake, features Stephen Dorff, in a plastic see through box, that moves, with a Ham radio like device, and lots of tubes. It’s kind of sexy when you think about it. 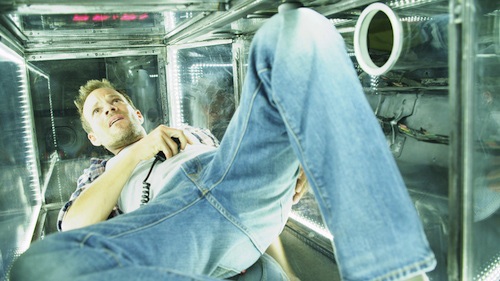 Especially if you think about it in this angle.

No, don’t leave yet. There is more plot outline to go over.

I mean, not a lot more. Dude is in a box. How much more could you possibly need to know.

Well, his CAREER is a pretty important one. Turns out he is a member of the secret service, and is in charge of keeping the President alive (duh). If there is ever an emergency, there are multiple secret bunkers throughout DC and the nearby areas to take the President and to keep him safe. It is not based on a pattern, it is random, and only two people know the exact location each day.

Jeremy (Dorff) happens to be one of those guys.

So when he finds himself awake in some strange car trunk, he realizes what is up. It is up to his wits to stay alive and stay cool, despite the torture and threats to his family, to save the big man in the White House. 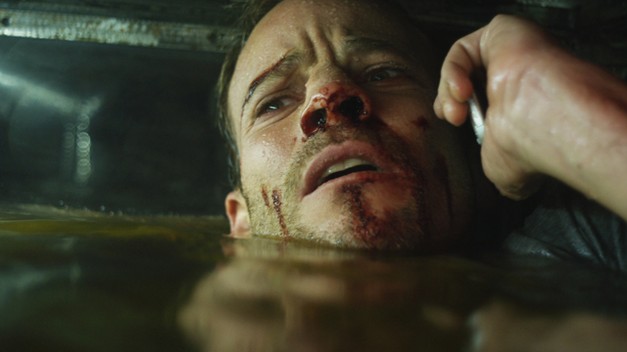 All the elements, even urine! (That’s not urine).

One man, one movie. That is basically what happens in this film.

He talks with a lot of people, none of which he knows he can trust. So it becomes a mental game, and a physical game, because of course he is going to get tortured. Just look at those tubes.

Unfortunately, I liked Buried a lot more than this film. One problem occured at the start of the film. Despite being one man in a box, a LOT of stuff was going on, pretty quickly. Count downs and flashes of light, and voices. It was hard to tell what was going on in the first 10-15 minutes. I felt lost, much like Jeremy probably felt loss, but it is worse if the viewer starts to get a headache.

That wasn’t a good tone for the rest of the movie, which eventually did calm down, but it was too late.

The ending was terrible. Just terrible. Ugh. What a shit fest. It went from making a bit of sense, and making the movie okay. Then it just went back into “Wtf” territory, ending the movie with us having no real explanation. Just kind of stops. Well, it doesn’t stop good. Bad Brake, bad.