Right off the bat, I will say I was not looking forward to Bohemian Rhapsody. The song is fine. And I love Queen! I have very fond memories growing up, watching Wayne’s World and hearing Queen’s greatest hits. My family owned two VHS tapes collecting their music videos. I saw them all the time. I really enjoyed I Want To Break Free because the men were dressed like ladies with facial hair, but the instrumental part freaked me out.

But why don’t I care about this film? Because production woes made me indifferent. I was in love with the idea of Sacha Baron Cohen playing Freddie Mercury, it was perfect, and he could sing!

Production woes! Cohen left! Creative differences! The band wanted a feel good movie about the band and PG-13, the actor wanted the real story, the R rated stuff, the Oscar winning Mercury stuff. And eventually we now got this movie. Let’s not forget that the director, Bryan Singer, probable diddler of young male talent in Hollywood, was kicked off the project when it was almost done, and they had to finish it without him.

Even the well edited trailer did nothing to me. I got to hear so many Queen songs in under 3 minutes. With Mercury singing. Is this whole thing going to be a film with Queen songs just spliced on top? Fuck. On my films, even my biopics, I want the actors do the singing, at least in a studio. I don’t need to see Remi Malek doing an air band performance for a few hours. 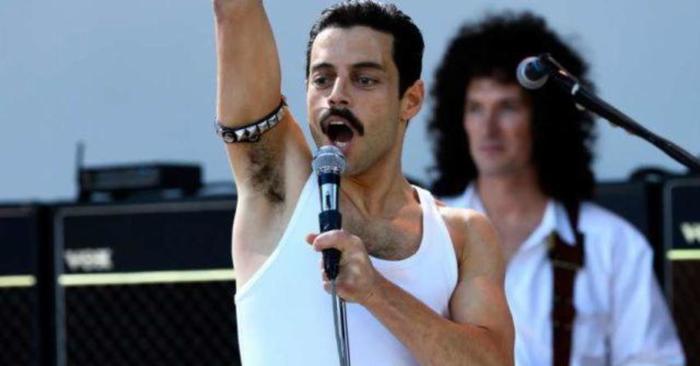 In the 1970’s, times were changing. Disco wasn’t yet in a full swing, but people still liked music, and still had dreams. Like a young Farrokh Bulsara (Rami Malek), who later would change his name to Freddie Mercury. He didn’t want a normal job at an airport, he wanted to sing in a band. And he just so happened on a band who just lost their main singer. That is where he met Brian May (Gwilym Lee) and Roger Taylor (Ben Hardy). A guitarist and a drummer. They didn’t want him, due to his teeth and look, but his talent did not lie. They eventually found a bassist in John Deacon (Joseph Mazzello) and the rest was history!

Oh, and some more things happened. Not an instant success, but honestly, it didn’t seem to take long either.

They were a band who worked together and competed together. To get songs on albums, to try new things, to go into places they had not gone before. Especially true for Mercury, who found himself eventually with men, despite being married with his long term love, Mary Austin (Lucy Boynton) and with kids.

There were a lot of influences on their music and on their lives. Roadies, managers, other lovers, groupies, fans, and what not. And of course, eventually the story ends in tragedy, but not before one of the best live concerts televised around the world. 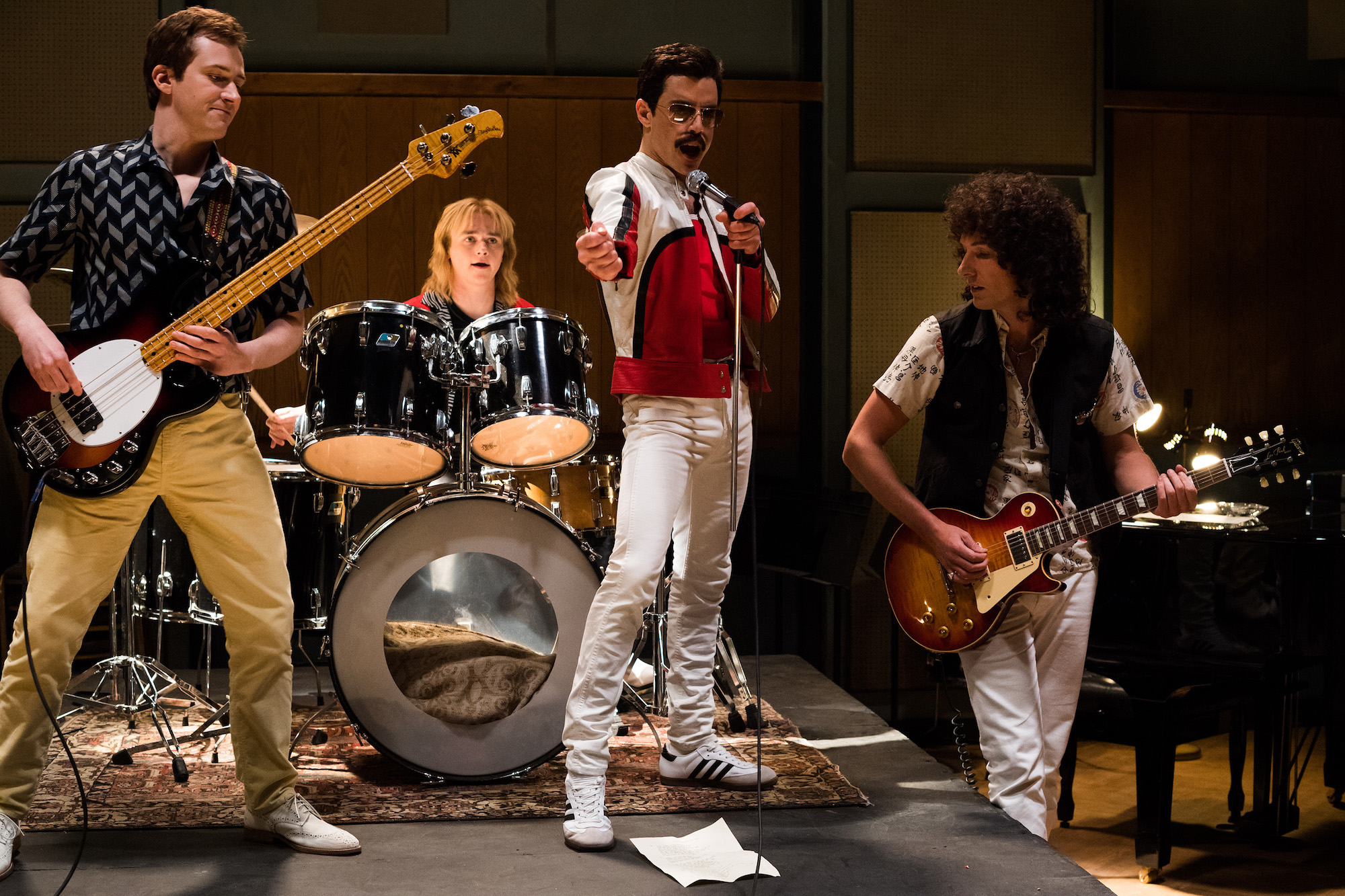 They definitely look cooler in this picture. Too cool. Ice cold.

Behold, for I am disappoint.

People will praise this movie for several reasons, and these are things you should be leary about. The number one aspect being nostalgia. Hey, they like Queen, so a movie with Queen songs is alright. Just having music that you expect to hear inside of it is not a reason for something to be automatically good. Queen music is expected.

Malek’s performance is praised because he gets to prance about on stage like no fucks are given, with some big facial expressions. But you know what he didn’t do? Sing. I think maybe once, or twice in this movie he actually had to sing, and when he did it was all very little. Basically all of it is just actually Mercury singing and again, if I wanted to hear Freddie Mercury sing, I have YouTube and CDs for that. Is it weird to have a double standard when it comes to performances? I want my actors if they are playing singers to actually sing, but of course I wouldn’t care if an actor is actually playing piano, guitar, or drums, although it can surely help make things authentic.

Honestly, one of my favorite aspects of the film ended up being the other members of Queen. I just loved that these members looked so much like their counterparts, who I recognize from seeing their music videos over and over again. They all also had their own personalities and traits, consistently through the film. I guess it is easy to get them right when the real figures are alive and backing the film. They weren’t outstanding acting performances or taking away from Mercury, but they felt like real people and that was a good change.

The way they chose to portray actual events in the film is really what bugged me. Honestly, it took way too long to have Mercury come out as gay in the film. They had hints about it, like stupid teases. Sure, being gay at that time was way more frowned upon, but as modern viewers, there is no need to keep such an obvious and important focal point hidden. And honestly, about 3/4 of the way through the movie, I was wondering if they would even say the word AIDS in the movie. I almost thought they wouldn’t mention it at all (they did). But they did it first through a weird news cast that Mercury happened to see. And the scene where he went to the hospital and was tested was just so…odd looking. It ended with a fan singing at him, and felt way too much like an awkward TV PSA about…drugs or anything really. It didn’t feel impactful, it felt awkward.

Biopics often have moments where they have people who doubt their talent who later are shown regretting it and being angry. These scenes are ALWAYS bad, and seem petty and unnecessary. But they really went full out with it in this movie. First, they had Mike Myers as the character in question. They made him say a line about how teenagers would never be banging their head to Bohemian Rhapsody, obviously referring to the scene in Wayne’s World decades later. We get to see him angry in his office later in the movie, because why not. Also during the Bohemian Rhapsody scene, it decided to have news/review quotes fly through the screen about how it was a bad song and destined for nothing.

Like, was the entire point of this movie actually to just rub it in some critics faces that people ended up liking Bohemian Rhapsody? Enough to name the Queen biopic after the song (which feels unoriginal and uninspired), just to prove that people like it.

The whole thing is incredibly average and standard as a biopic. This feels like a disservice to a band that was anything but average and standard. And because of that, I disliked it even more. This movie played it safe and boring. I, for one, will be ready for the better film in twenty years.