With a film called Bodied, I really didn’t know what to expect. I mean, it seems like a horror film, doesn’t it?

Warm Bodies (Warm Bodies) was a comedy/romance, so this could be going in that direction.

Or maybe like, an action film? Or a boxing film. That would work.

But a street rap battle film? One that is sort of a musical, sort of a comedy, and sort of a anger inducing suspense? All in one?

Well, you had my curiosity, but now you have my attention.

This is not a group of people waiting at attention.

Way back in [Current Year], a man was trying to turn his love of street rap battles into a dissertation for college. That man was Adam (Calum Worthy) and he was extremely white. How white is he? Well, he wants to write scholarly about rap, that is one thing. Adam so white, his dad (Anthony Michael Hall) is a professor at a university, and is like, the best professor at poetry and stuff. Adam so white, he feels bad about his whiteness. Adam so white, he cannot come up with a good nickname.

Adam is attending one of these street rap battles with his uninterested girlfriend, Maya (Rory Uphold), when he gets to have an interview with Behn Grymm (Jackie Long), his favorite rap artist. Adam knows everything about the different rapper’s rhyme schemes, how they can build up a diss, and all of that. The only thing missing is actually competing in the rap game.

But Adam is white. Super white. If he jumps in, and is successful, he doesn’t want to seem like a culture vulture. Even if it is his dream, it would shame in from his family and friends, all of which are very liberal (like him).

Despite this, Adam gets challenged on the streets, and despite being awkwardly white, he destroys the playa who tried to front and becomes somewhat of a viral sensation. So what is a white boy to do? Follow his dreams and throw away his family and former friends? Or go abck to his paper writing and always wander what if?

Or maybe a third option. Follow his dreams and throw away his family, former friends, and new friends too! A weird option, but an option nonetheless. 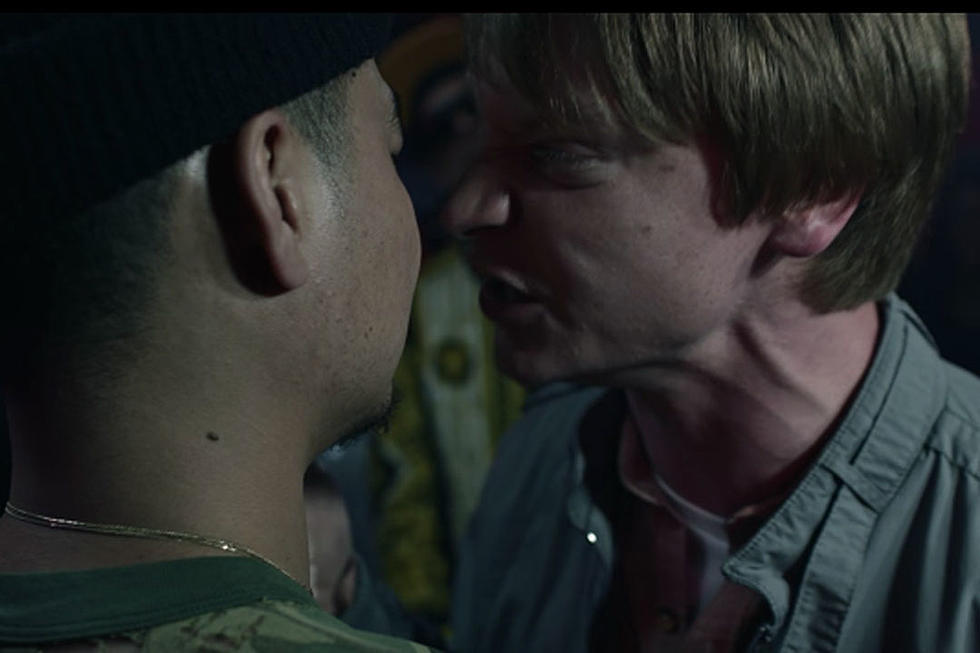 Bodied is a hard film to sell and a harder film to describe. It is the type of film that seems to have way too many problems associated with it and to be a disaster. And maybe because the film is constantly on the edge of disaster is why the movie works in the first place.

My best description of this movie is like watching Breaking Bad. Not the entire series mind you, but the end of season four. Walter White had done some desperate things things in the show, and despite them being deplorable, they seemed to still be related to his general survival. But by the end of season four, you certainly know that things have changed by now. This is not the man you remember from season one. He is a bad guy, and you have been sort of rooting for a bad guy this whole time. Bodied is like the first four seasons of Breaking Bad.

And yes, that implies it ends before the various arcs we get in season five. And that is okay.

Our main character is not the nice guy he claimed to be. This film tackles so many subjects in such a unique and fresh way. Like cultural appropriation, systematic racism and oppression, and what is fair and not fair. What it means to be a friend and what someone is willing to sacrifice to win it all. Thanos would approve of our main character.

I didn’t know that a film with so much rap battling and recklessness could hold my attention. But the two hour run time just flew by me and was captivating, despite being about a topic I never cared about before. I am so conflicted at the end by so many characters. My wife came to talk to me during one of the final rap battles, and I had to shoo her away because “this is important”. I was cringing and almost crying, not sure how I should be reacting to what was on the screen.

In the end, Bodied is unique, both in terms of plot and how it chooses to tell a story and make its characters feel fresh. it is a wonderful addition to film and something you should not overlook.