I hope Truth or Dare is successful, but while definitely going strong on the Truth or Dare aspect. I don’t want it to be an introduction piece and then oh no, killer, lets freak out. I need it to last the whole film.

I hope it introduces a franchise of party game horror films. I want to see the follow ups of Never Have I Ever, Spin the Bottle, Suck and Blow, and of course culminating to the film where all the pieces come together: Seven Minutes In Heaven.

Note, none of this relates to the movie Would You Rather, which came out half a decade ago. But they might try and remake it to add it to the fold, with a new, sexier cast.

I’d like to think part of the audition process for this film was to try and make that face naturally.

Down in Mexico, we have curses, because, Mexico I guess. Some sort of xenophobic nonsense.

Our hero of this is Olivia (Lucy Hale), a good person, she builds houses, cares about the greater good and all of that silly stuff. She planned on doing good things over spring break, but her BFF Markie (Violett Beane) sort of forces her to join them down in Mexico! Last Spring Break before their friend group moves on and gets old and less friendly.

They do things, have a great time, and eventually Olivia meets Carter (Landon Liboiron), an intelligent individual clearly, like her. They are about to leave but they agree to follow him to a cool place to have some more fun. Yay mysteries!

Sure enough, Carter gets the uneasy group to pretend to be middle schoolers and play a rousing game of Truth or Dare. Everyone goes around the circle, doing a dare or spilling their beans, until we learn the truth from Carter. He brought in the group to force them to join this game, to hopefully free himself from its cure. They are haunted now, and if they refuse the task given to them, then they will die. If they lie, they die. And if they refuse to play, well… 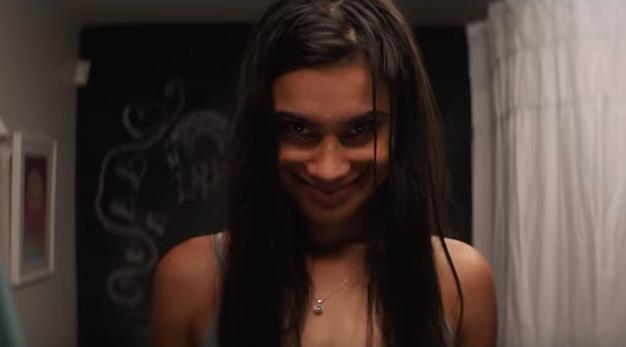 And here is another one for good measure.

You know what can make a good horror film? Believable actors, for one. The situations don’t have to be too believable. I can suspend my belief in a movie for scary aliens, monsters, demons, ghosts, ex lovers, possessed things, invincible serial killers, whatever. Sure. As long as it makes sense in that world. But if they introduce things and seemingly just change things on the go, and give no real fucks about the events? Well, that is shitty.

In this scenario, it takes far too much time for everyone to get on board with what is happening. I think two of the friends need to die before people start realizing that something bad is happening. We just get to watch friends argue and get mad about spoiling each others shit up with the truth. And afterwards? Well, it is mostly friends still being dumbasses as a group.

First of all, this movie is all over the place. With one of the dares that occurs, it feels like a really poor final destination movie, and then never really goes back to that concept. “Why don’t they just all say truth?” Well because they suck. And the movie wanted to add rules later on. This movie plays out the dumb scenario of turning a dare into telling the truth as well, just because. We have characters who over and over again get upset over the truth, but they know that if the truth wasn’t said, their friend would die. But who cares right?

The ending is the lowest point of the film, so its interesting they decide to leave us with a sour taste in our mouths. After a scene where our heroes try and get the upper hand, we find out that it still didn’t work as planned. Then they try one more plan which, as previously established earlier in the movie, won’t do shit for them at all.

I am going to put some spoilers here. The previous Truth or Dare group hoped that by putting new people in the group they would be freed. It did not, it just made it bigger. They still had to do the question just the others didn’t know about it. And despite being merged groups, they only bring up these facts when it is convenient, in lazy writing. For some reason one of them can’t do it if he is alone? Even though they have shown others have to do it when alone? For some reason order only matters for this group, and the others can just be asked when convenient for the plot? It basically shows that the two groups have their own games on it and don’t actually affect each other, meaning adding more people will not buy you any time, because your game is still limited to those players. And yet that is just what our “heroes” try to do at the end. Get more time. With this terrible, terrible, strategy, all they did was fuck over others, while also dooming themselves right after the credits role anyways.

It is just such a goddamn stupid movie. It is never really well established. When they exposition us enough in the film to try and piece it together, it just doesn’t really grok well. The strange face thing wasn’t good, wasn’t scary, and just seemed silly. So many jump scares that were pointless and lazy. And again, it is just very stupid.

I wouldn’t dare my worst enemy to watch even half of this movie. That’s the truth.