Patton Oswalt isn’t given a lot of movie roles, and really, that makes sense. He is a weird guy. A decent stand up comedian, but just in general a weird guy.

So when I see that he is actually the star of a movie, and not just a best friend/side character, I jumped at the opportunity to see what the heck Big Fan would be about. 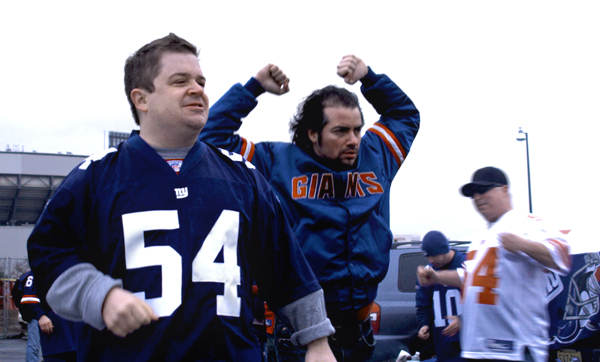 I also like camaraderie! Yay sports and people! Yay!

Paul Aufiero (Oswalt) is a big fan (title drop) of the New York Giants. Like, really big fan. He goes to all of their home games. Never goes into the stadium, tickets cost too much, but he watches the game in a tv in his car with his bud Sal (Kevin Corrigan). He can’t afford tickets because he has a job as a parking attendant, just sitting in a booth, taking money. He listens to a New York radio sports show, and calls in every night to give his opinion, and trash talk another caller Philadelphia Phil (Michael Rapaport). He just spends most of his shift writing down what he is going to say, so he can impress his friends.

His favorite player is the QB, Quantrell Bishop (Jonathan Hamm) (Not an actual existing player), and basically he worships him as a hero that will get them to The Super Bowl. So when he and Sal see Quantrell hanging with his crew, they get all giddy and decide to follow him so they can meet him. And they follow him for awhile, accidentally. Like, many miles. And go to a club. And then a strip club. But finally they introduce themselves! Yay, they are drunk and happy, so they don’t care how white and awkward these fans are.

Until they mention where they first saw him. Then it got weird. Then Quantrell, on a drugged up outburst, knocks out Paul and beats him up pretty hardcore.

Huh. Three days later in the hospital, Paul wakes up, his hero betrayed him, and very much so injured. His favorite and best player also suspended indefinitely for the actions he helped cause.

But maybe there is a chance? Maybe he doesn’t have to press charges, and Paul can save the season still for the Giants…

Marcia Jean Kurtz plays his mom, who he lives with, and Gino Cafarelli plays his ambulance chasing brother. 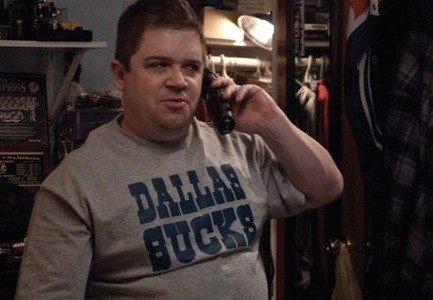 Patton picked the shirt that would offend some people, but gain him the most respect.

Big Fan was listed as a comedy, but was definitely far far far more heavy on the drama, and should be considered a dark comedy, more than anything. While watching it, part of me was getting pissed off at the plot, watching it unfold, trying to figure out why the character would be that dumb. Why he would make those decisions. Why he would be so blindsinding by fan loyalty to do the actions he did.

Then it hit me. All of the feelings I was feeling were exactly the feelings the movie wanted me to feel. Repetition in that sentence yo.

When I thought even more about it, I was almost a bit excited at what the movie was hinting at, ever so slightly the entire time, and it made sense. The actions that followed the beat up made perfect sense. I was in the wrong, not the movie.

But it was done in a subtle, yet crazy way for it all to work.

The ending was a bit shocking at first too, as the conditions kind of built up to the final show down, and once that too was revealed, I found myself laughing at the absurdity and darkness of it all. The movie accomplished everything it wanted, with its small budget and mostly unknown actors. Well done, Big Fan. Well done.