Back in the 1960’s there were just three networks. NBC. CBS. And way way below them, ABC. Sure it was third place, but it was shit with shit television.

They didn’t like being shit so they were doing their best to get their name on the map. And in 1968, the Republican and Democratic Conventions were all big news. TV and politics! How zany! NBC and CBS had lots of coverage of the Conventions planned for their programs, and ABC was kind of just standing off to the side trying to get into the same room.

This is an idea that has never been heard of before! Debates! And not the presidents! Just two allegedly smart people trying to show why one parties ideals were better.

And they were like fuck it, let’s do 10 of these, before and after the conventions. Let’s get Gore Vidal and William F. Buckley. The Best of Enemies. 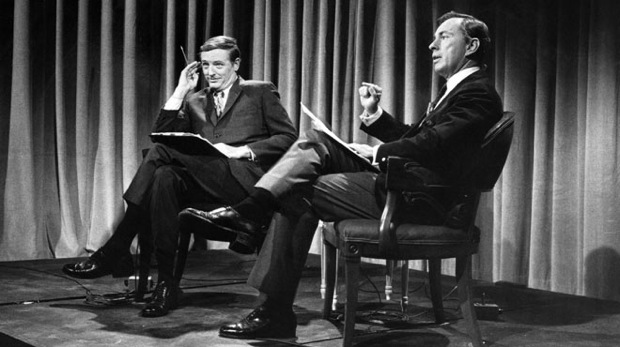 This ended up being big. Really big. Vidal is more famous, the Liberal, as he also wrote books and screenplays for film. He also had his own show after the debates to do debates with new people to get issues out.

These debates were so big, they can be pointed out for why political commentary exists today. This is why news stations have groups of people arguing about issues. Because us low non politicians love the shit out of these pundits.

Political commentary became big after it. The problem of course is it is less intellectual, features a lot more lying, and no one is having a real good honest debate.

But Vidal and Buckley started it. And one of them clearly one the debates, but I won’t spoil that. They are cool enough to have Kelsey Grammer and John Lithgow as their voices though, when the need to read their written word arose. That is pretty bad ass.

Best of Enemies is on Netflix and up for and Indie Spirit award for Best Doc, and maybe an Oscar too. Either way, a very informative and good way to spend 90 minutes.