Oh snap, Beneath The Darkness, that sounds scary right? Seems like something that would fill me with fear, because there might be something else afoot, outside of the normal murder shit going on. Like ghosts? Double fear. Who doesn’t want that?

But there is no double fear. Just normal fear, that of which is not too scary. Damn it!

(And by damn it, I mean woo. I hate being scared). 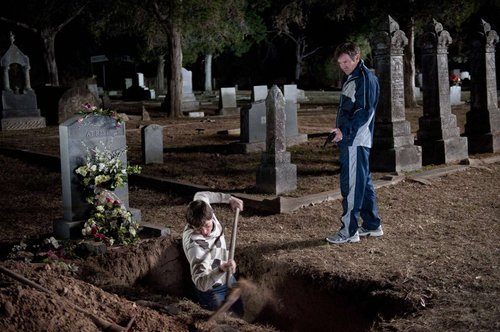 Unless of course you don’t like the idea of digging your own grave and being buried alive.

Here is the basic premise. Dennis Quaid is a mortician, and thus has a creep factor going on. But when his wife dies (not in movie) he begins to stay at home more and more, yet still a respected member of the community. The actual first scene shows him going on a run and meeting a neighbor. He then takes said neighbor to a graveyard (with his gun), makes him dig up that grave, open the coffin, and hey look, it is empty. He pushes him in, locks the lid, and buries him. Okay, so yeah, Dennis Quaid is the bad guy!

Then we switch the movie to the group of teens and its stays there for awhile. The main character, Tony Oller, believes in ghosts. His sister died like, 10 years earlier, and he thought he saw a ghost over her bed. He also is the gardener for Quaid, so he and the others get the idea to go into his house at night, just to try and find ghosts.

But what they don’t find is ghosts. No, they find out that Quaid might actually be some crazy killer, and he is all like “Ahh!”. He ends up killing one of them, because they “accidentally fall down the stairs” and he is free to go, because hey. Respectable member of the community, and the others were breaking and entering!

Now Tony and his not girlfriend but maybe, Aimee Teegarden, and another friend want to try to prove that he is a murderer, and it wasn’t an accident. But the detective, Brett Cullen, can’t believe that without evidence. So yeah. Rest of the movie is trying to prove it, breaking and entering in more than one occasion, and a lot more funeral/buried alive talk. 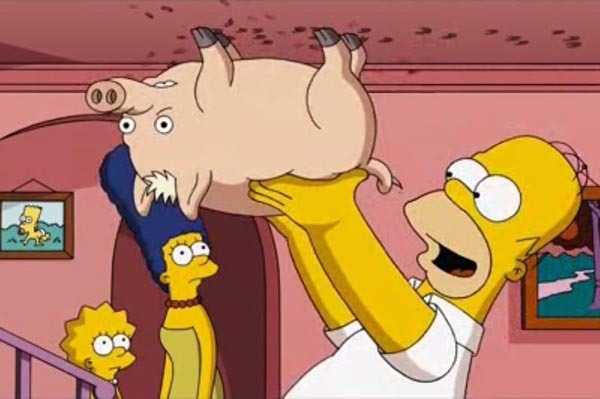 Inappropriate picture, or a joke I haven’t made yet?

Obviously the movie doesn’t sound scary at all, just kind of suspenseful. Sure some people might die, like the nerd in the first scene, but not much. Really what it is, is a movie trying to figure out why he is doing the things. They give a reason, it is just bad. More or less, he is crazy. They try to compare it to some literature too, like the Tell-Tale Heart, but that doesn’t work too well either.

I think the only reason I am giving this a passable grade is because of Dennis Quaid. He hammed that role up, and it made it enjoyable, if not silly. Yes, I showed a pig picture, because I wanted to say “Hammed”. So damn hammy. The final scene the fourth wall is even broke, and unnecessarily.

Its an okay teen scary movie, but one that will also be forgettable in a few years.

2 out of 4.
Tags:2 out of 4, Aimee Teegarden, Beneath The Darkness, Brett Cullen, Dennis Quaid, Horror, Tony Oller