When people are murdered, there is a small time frame where police can accurately attempt to gather crime scene evidence. Blood samples, footprints, fingerprints, whatever. For missing kids, they usually say the first 48 hours are the most important for finding them, and that is true for murderers as well.

In 2008, for the case of 13 year old Aarushi Talwar, it may have made all of the difference. She was found murdered in her own room in the morning by her parents. They are an upper caste family in India. Wealthy enough to have servants who come to their house to clean, and one who even lives in the house. And he was missing.

So clearly it was probably the servant, who then ran. Why did he do it? No clue. But rumors could run rampant.

Unfortunately, the next day he was found murdered as well. Except he was on the roof of their home (that no one checked on day one). The door was locked, it definitely wasn’t a suicide, and now we have two murders that they have no idea how to explain. They were behind closed doors (the title!) that were locked, with no forced entry points. Did one of the two let someone in who became violent? How could the parents not have heard? And of course, seriously, was it just one of the parents? 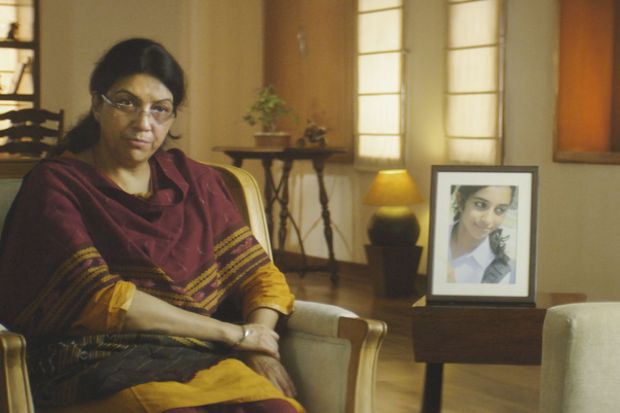 I mean, it could have been her, I wasn’t there.

The idea of honor killings is prevelent enough in India to be a thing people latch onto. Like, if those two were in a relationship, did the dad kill them for destroying their honor? We don’t want to assume things about these dead people, but these are the stories the media picked up.

From day one, the crime scene was basically ruined do to extra guests. Everything the police did was heavily reported by the media, who would stand by in groups of 20+, trying to get anything out of witnesses, the police. Everything was scrutinized and judged and yelled about. They directly made the initial solving of anything almost impossible, and stayed as a thorn in everyone’s side demanding answers and making all practical normal procedures fall out the window.

This is a case that was passed around across various groups, different levels of police and different groups in those groups. Because of screw ups, weird results, or not following all leads. It is a messy situation, and thanks to appeals, yes, we still have no official killer on record 11 years later.

It is a really interesting story, but one I think could have used a bit less detail. 2hr40min felt two long for this two-parter (which some time ago was a 4 parter apparently?). It was very much unbiased in that I couldn’t even lean a direction to tell you who I’d believe after all the evidence.

It also still noted the struggle of the caste system, since the media made the whole thing to be about the 13 year old girl, and practically never said the name of the servant who was also killed.

I think the length and the constant switching between English/Hindi, which made it hard for me to focus, is what ruined the overall level of this documentary for me. It has a good story, about the nature of media and crime scenes, but it was also bogged down and muddled.