There comes a time in every man’s life when they see a trilogy that makes them so hard for drama. That might sound graphic, but that is how I felt watching Before Sunrise, Before Sunset, and Before Midnight.

Have you heard? Before Sunrise came out in 1995, and it is about two people who meet on a train in Vienna. On a whim, they go out and explore the city together, having a long first date, and decide to meet each other again in a year. Before Sunset came out in 2004, nine years later, and was set nine years later. The man now an author, who wrote about their experience, the woman, still French, and an environmentalist.

So what happened? Before Midnight is ending their story, that I know of. It came out in 2013, another nine years later, and is set of course, nine years later. Holy fuckity fuck, that is ballsy. Same actor/actress, and same director. 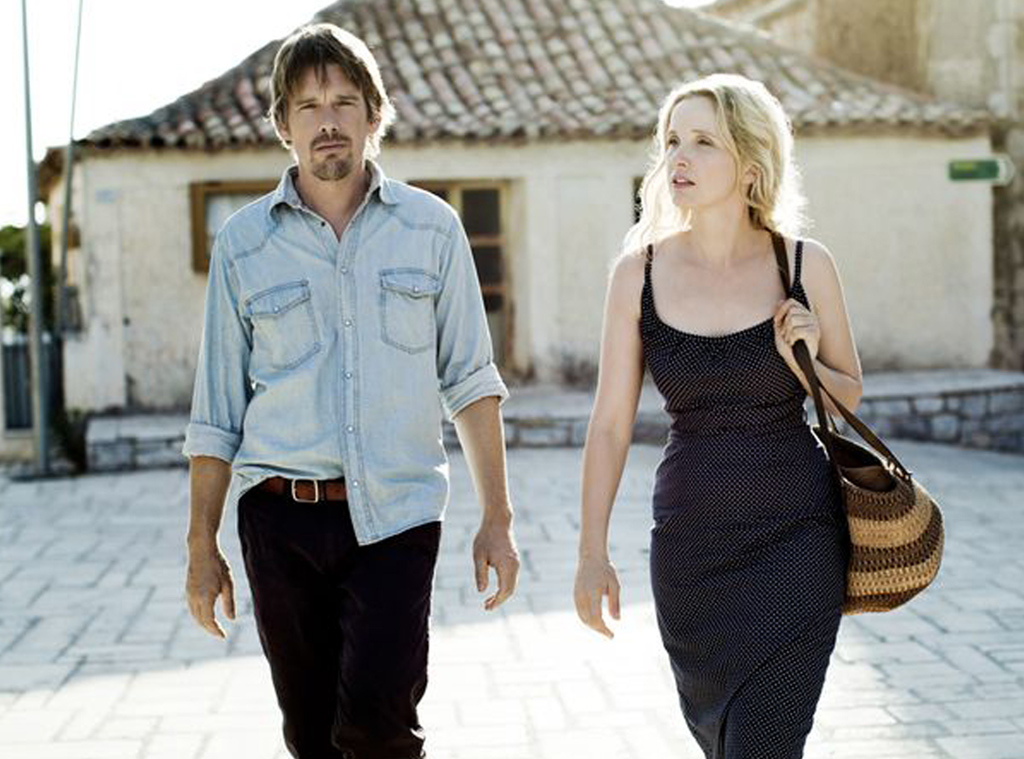 I have seen them age and grow. I feel like God.

I don’t know how to write this review. I feel bad talking about the plot, because I really wish you have seen the first two movies before you saw this one, although I have a source that tells me you can enjoy this one without it. Let’s just say that I am going to describe their current state of lives, and they will kind of be spoilers. So, read at your own risk.

Jesse (Ethan Hawke) and Celine (Julie Delpy) have two twin daughters, both seven. They are near the end of a six week vacation in Greece, although they live in Paris. Jesse has written a few more books now and Celine is really high up on her career path. She is thinking of making a change, although Jesse isn’t a fan of it.

Jesse is also worried about his son from his previous marriage, who he only gets custody during the summer and Christmas. He lives in Chicago now, and his ex-wife hates him, understandably. But he wants to be closer to his son, now that he is in high school and is going to be an adult soon. He wants to be there for him. His wife doesn’t want to move to Chicago.

Spoilers, you get to see her boobs too. Like, a lot.

Fuck yes. I loved this movie. In fact, I want the whole trilogy in a nice cool box set. I would buy that so hard. Even if they offered to buy me a klondike bar to not buy it, I would give up that klondike bar chance. That is how much I love this franchise.

Why? Well, for one reason, it is all basically dialogue. That is great for those of us who love dramas. More importantly, a lot of the scenes are quite long, single camera frame, with them walking or driving in a car with no real cutaways. That means they are doing this all from memory, actually acting and being real about it. The realism is incredible, which makes the sweet parts that much sweeter, and the anger fight induced parts that much scarier/sadder.

You should watch these movies. Or else, you know, you are probably lame. Each one is fantastic (well, the second one is the least fantastic), and they probably deserve your money more than you.