Oh no, they’ve gone and done it. Netflix has bought the movie, Beasts of No Nation, from the film festivals and decided to release it. Fuck the big studios. They want to get in on that game too. They paid 12 million to distribute the film, and since it is Netflix, most of you can see it. Hell, if you prefer films in theaters, you can go see it on the big screen instead. It has a limited release, because none of the big chains would show it. They demand at least 90 days before the film gets released online, or they won’t show it. Because theaters are dying and all that jazz.

But yeah! They wanted a good film to try and win awards to help legitimize their business. Making their own TV shows is cool and all, but releasing their own movies is another. Note, they did not make this film. They just paid to distribute it. The next film that Netflix will release at the same time as theaters is Crouching Tiger, Hidden Dragon: The Green Legend. So regardless of quality, BoNN is in some good company. Hopefully. I guess The Green Legend can also suck.

Needless to say, this film probably won’t win any Oscars. Those are run by the Academy, and so many of them are stuck in their ways, they are probably firmly against things like Netflix trying to join their game and hurt the money studios can make in theater ticket sales. Since ticket sales are the end all be all in movies making money, outside of the few that can go cult status and coast on DVD/Blu-Ray sales for decades.

There is a joke there, implying DVDs or Blu-Rays will still be a thing decades from now. 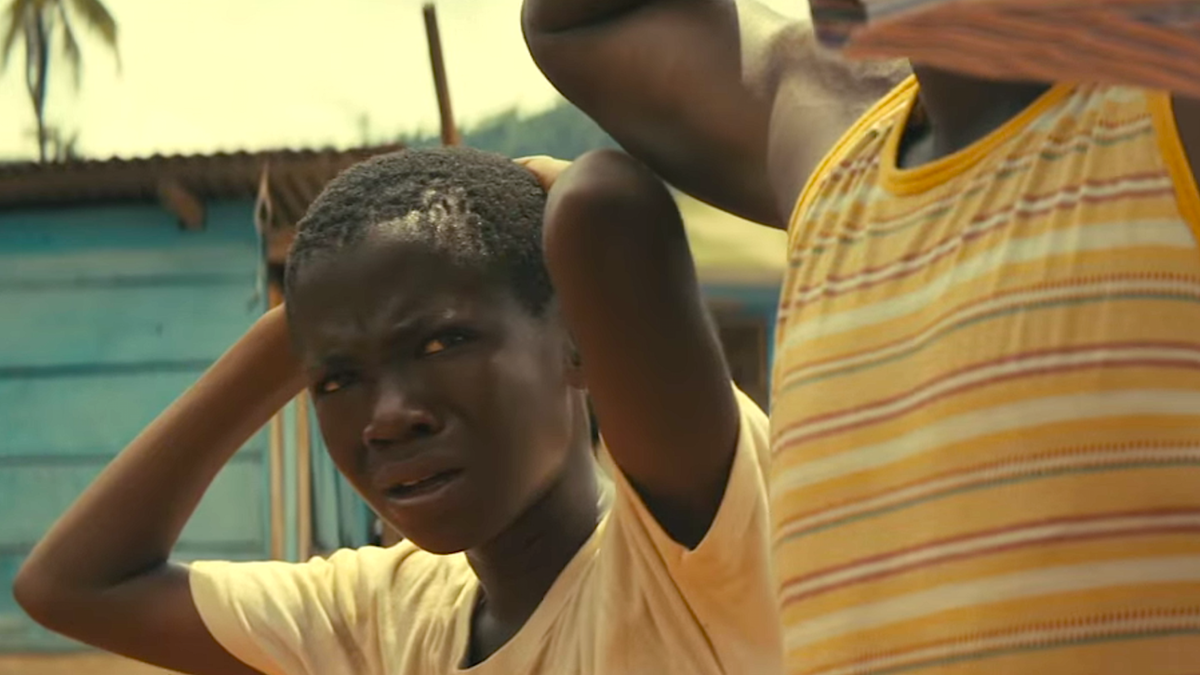 Maybe they will be things in other parts of the world. But I doubt they make much in the African DVD Sales Department.

Agu (Abraham Attah) is just your typical boy living in a typical civil war torn African country. This one is unnamed, because it is a fictional story, but hey, you can probably imagine it all. He likes to sing and dance with his friends. He hangs out on the streets, because the schools were closed due to wars. Oh well, at least the local police force from Nigeria is keeping things calm in their village.

You know, until it doesn’t. Next thing they know, danger is everywhere, and it is hard for them to get their loved ones to safety. Try as he might, Agu’s dad is only able to get his wife to safety as he is unable to find a car for his boys. And sure enough, when the “government army” comes rolling in, they assume the villagers are actually working with the rebels and get shot. But Agu was told one thing. To run into the bush and to survive.

And that is when Agu meets the Commandant (Idris Elba). Turns out he has his own army as part of the rebel force. He is always recruiting too, especially if they are younger. In fact, there are quite a large number of children in this army, so it is easier for Agu to really get involved when the officer directly above him is only a year older than him. And hey, if they are staying in line and being obedient, he should too. They have food, shelter, camaraderie. AND YOU KNOW WHAT ELSE? The government killed his family, damn it. Why shouldn’t he join the rebels? Where he is loved and can continue to be loved if he just, you knows, shoots the innocent villager or two. 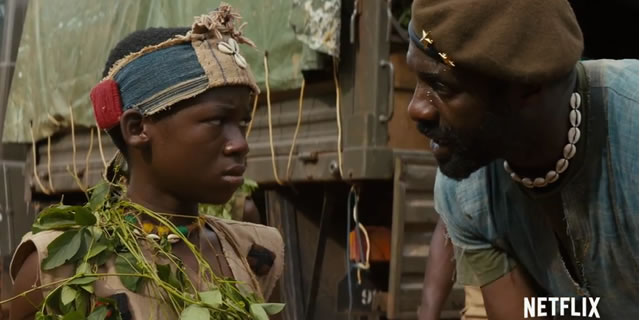 Running at around 147 minutes, Beasts of No Nation is basically your typical war film. Those are always long fuckers.

However everything else about it is pretty different from your standard war drama. Usually in those films when they talk about people just being kids, it is due to the dead bodies of a village they find, or an eighteen year old recruit heading overseas to kill the bad guys. BoNN dealing with actual child soldiers reflecting an actual reality of some African countries adds a constant level of fright into the whole equation.

At the same time, because of this being in the news (hah, not TV news of course. But internet news and stuff) so much and for so long, it also feels like a lot of the surprise is and shock factor is already gone. Do you remember Kony 2012? I fucking do. I got caught up in the hype and ordered one of those paint the town red packages. A week later I realized that it was a terrible program and was able to fight tooth and nail to cancel it and get my money back. But still. That was a super big thing for like, a whole month almost.

I wish now more than anything that it could have never happened. Because once people realize that yes, it is shitty there, but three dudes form San Fransisco are not the best holders of our money to do it, people kind of got fed up with the child soldier thing and then promptly ignored the real problems that are still occuring. If that had never happened and then BoNN came out, it could lead to a lot better and positive PR in order to help stop the civil wars over there. Then again, blah blah, USA needs to stop interfering with countries trying to do their own thing because we cannot police the world.

What I am getting at is the situation is hard in real life for the rest of the world, and it is much harder for those living in those areas, which the movie does an incredible job of showcasing.

Attah and Elba do a good job at the helm of the film, and their relationship is convincing and a bit scary. Elba is such a smooth talker that I almost wanted to shoot some fictional villagers for him. But make no mistake, despite the bigger headline, this is Attah’s film and story and it is a great one. Due to the subject matter, it was a lot harder for me to find myself completely emotionally invested in the situation, and from some sudden changes in the plot’s direction, I did find it harder to understand just what was happening in the story. But on future re-watches* I’d probably be able to relate and understand it all a lot better.

* – Hah. I won’t rewatch this. War stories take too much out of me and time. Still haven’t seen Saving Private Ryan since I was like 10.