I think a lot of my reviews coming up will be from my “box of weirder things” in the corner of my room. And by weirder, I just mean lesser known.

Bart Got A Room I picked by grabbing randomly, but originally bought it because hey, when has William H. Macy ever disappointed? The answer is never, damn it. If you have a real example, I will ignore it and just say haters gonna hate. 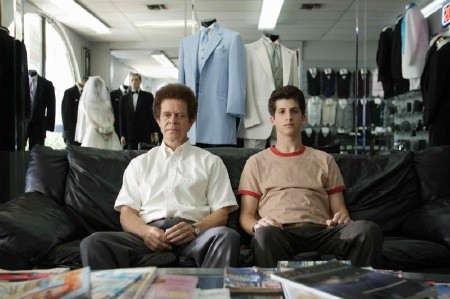 But then again, Macy isn’t the main character.

The main character is Danny (Steven Kaplan), hah. You thought his name would be Bart. A few months before Prom, and he is starting to think of what to do. Sure, everyone expects him to go with Camille (Alia Shawkat), one of his neighbors and best friends since pre school. But he wants it to be more of a romantic thing. So of course he instead thinks about asking the sophomore he takes to and from school every day, Alice (Ashley Benson).

Well that doesn’t work, and he already told Camille it was a sure thing. Awk. Oh well, it is still a few months before prom, he can easily find another woman and not have to weirdly go back to Camille and ask her, right?

His parents are also recently divorced (Macy and Cheryl Hines) and dealing with their own relationship problems at the same time. The potential of a new step parents, and the potential of a sexfreak (oh guess which parent each applies to).

The movie also has a “music video” attached to it!

First off, this movie is pretty short, about 75 minutes in length. So the story moves fast, as you can tell, since it doesn’t have that much going on with it. I loved the beginning, the quirkyness of it all felt funny in an embarrassing way. And the constant face palms at our main character, trying to make prom something more than it is, because even BART got a damn room and date.

But eventually the film lost its uniqueness, and the last third is kind of disappointing. A lot of predictability, and eh, just was a let down with the buildup. Opening hooks are great, but endings are the last impression, damn it.

So it is an okay movie, but you know. Could have had a stronger finish.