Well, bad news for the Rad-heads out there. She is not in this movie! She has been replaced with Piper Perabo, who you would recognize as one of the girls from Coyote Ugly. Replaced, and they were thinking we wouldn’t even notice! The nerve!

But in all honest, I liked Olympus Has Fallen enough, it was good. I thought London Has Fallen was really, really, bad. The last time a movie dropped that much with a sequel and then came out with a third film we were given Taken 3. And no one needs or wants another Taken 3 to occur. 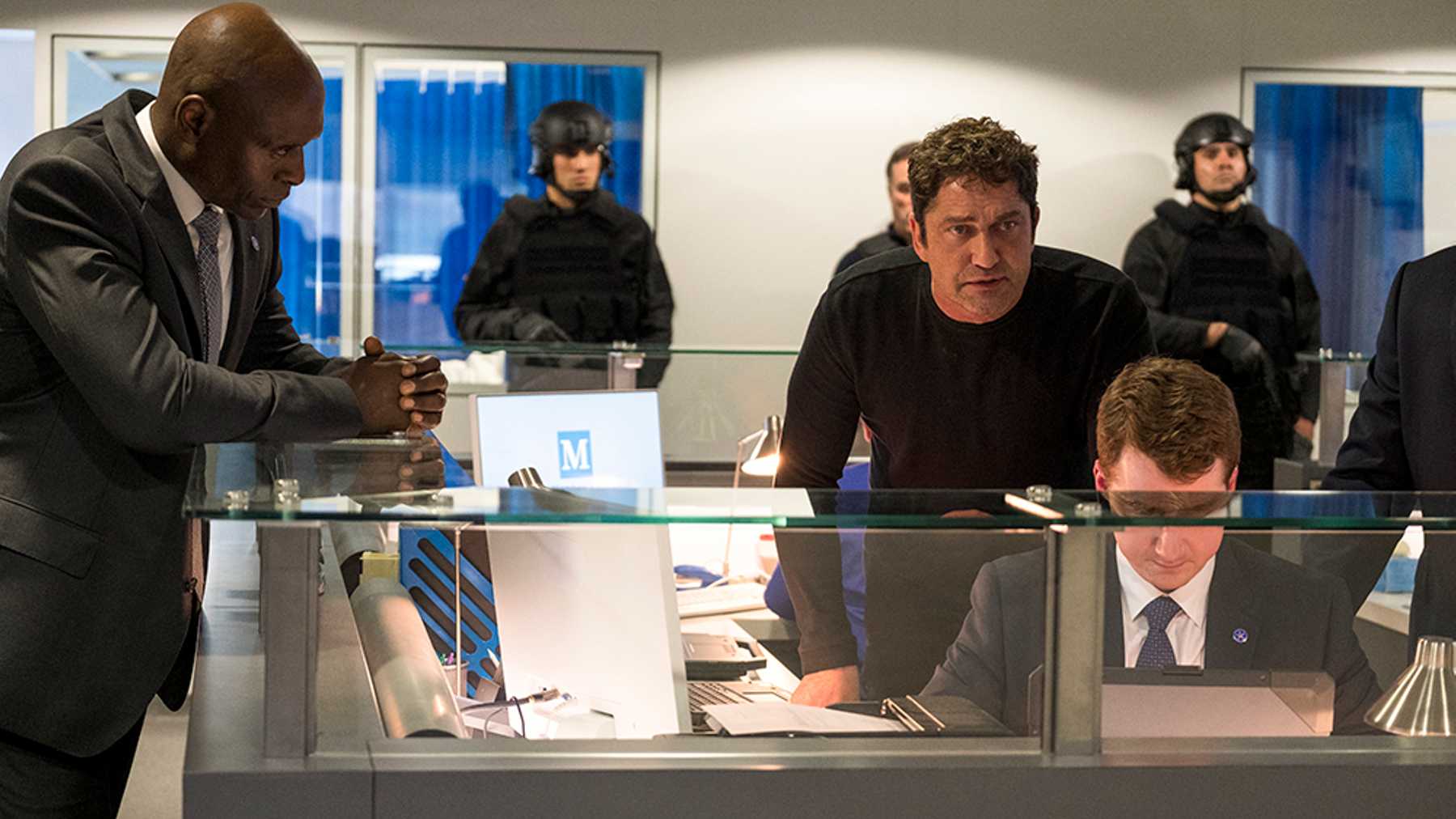 I hope they were Taken notes.

Taking place within two years of the previous movie, Mike Banning (Gerard Butler) is still protecting the president after the events in London. His health has deteriorated, lot of injuries in his body and spine, sort of addicted to pain killers too. But hey, he’s doing it for the job, damn it. Oh and the president changed. The former Speaker of the House and VP, Allan Trumbull (Morgan Freeman) was elected president! No, Aaron Eckhart never died, just finished his term and went off into the night.

Well, on a totally normal fishing weekend, some vans unleash a large army of tiny drones. The drones are not there to go pew pew, but BOOM BOOM, as they are kamikaze drones that pack a big explosive punch when they crash. So technically they are like, really smart missiles only, with cameras.

And these drones lay waste to the secret service people, but end up ignoring Banning. They also fail to get the President, who instead gets knocked into a coma, thanks to Banning’s work.

Unfortunately for Banning, the crime was filled with evidence to make it not only look like he did it, but that he took money from Russia to do it. So now he is the most wanted man for this crime, and despite his innocence, he figures he needs to elude the law and run around until he can prove his innocence that way.

Baptisms have gotten more intense in this world.

Angel Has Fallen is better than London Has Fallen! I feel like this rarely happens. A movie has a terrible sequel, and then goes for a third film that is actually better. It’s not better than Olympus Has Fallen. Angel is still a pretty stupid movie, but it is more entertaining and follows a good moral code.

A lot of times when we get to the “oh man, they were set up and framed and now all their friends are after them!” part of a franchise, things take a weird grey area. In some movies, the “hero” then kills everything in his or her path to prove their innocence, even if it is colleagues from the FBI/CIA/Shield/Secret Organization. So they do a bunch of bad illegal things en route to prove their innocence. I am happy to say that this does not happen here. He kills only the bad organization, and goes out of his way to not harm the good guys who are just told to bring him in.

It is really an awkward thing to have to look out for.

Again, this movie is stupid. Plenty of terrible tactical decisions set up just to make the movie longer / more intense fight scenes, instead of just resolutions to our problems. The bad guy motives halfway through the film stop making sense when it is clearly time to give up. The introduction of Nolte’s character came out of left field with no reason to assume he’d be a character for three movies.

However, the action is better, the plot is a little bit better (not a lot, little), and it has plenty of entertaining scenes along the way. The twists and turns are extremely easy to guess, so it almost seems insulting to leave certain reveals so late in the film as if we weren’t paying attention.

And most importantly, it is miles above London Has Fallen. That’s all we really care about.