Time to start a movie with some controversy. Maybe two levels!

First of all, I remember when the book American Sniper came out. I remember a lot of people getting it and loving it too. Biography of Chris Kyle, the deadliest sniper in military or something like that. I also remember all the controversy after that about all the lies in the book. He lied about several things, Jesse Ventura even won a lawsuit about the lies in the book, and the fact that he lied about seemingly random things, brings the whole truthfulness of the book into question.

How much of it is exaggerated? Apparently there isn’t even a stat of confirmed kills, so that part might have no merit either. Basically, a curve ball into the biography thing if it is based on a fictional book.

Second controversy? Oscars. American Sniper got nominated for a lot of awards and people are angry for some reason. Mostly people clamoring for diversity. Or that the Academy is old pro-war people. I dunno. I think it was mostly people who hadn’t seen the movie. Like me, until now. 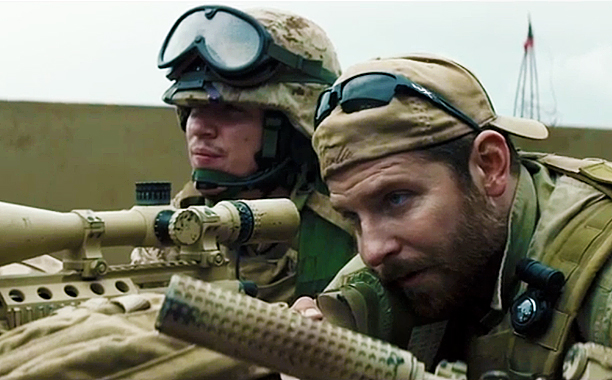 Chris Kyle (Bradley Cooper) came from humble beginnings. Texas. His dad told him he needed to help and protect others. He was a cowboy in the rodeo, but thought about going into a more noble career after seeing war news on TV. No, not 9/11. Some 1998 U.S. Embassy attacks in Africa.

He became a Navy SEAL, which lead to him becoming a sniper, and he went off to fight some wars. Namely, four separate tours of duty, which I have been told is quite a lot. He had a few important missions there and had to kill a lot of people, but he also saved lives. And some he did not.

Hey, and between these, he also met his future wife, Taya (Sienna Miller), who he had kids with. Being away a lot really caused a strain on the family, but at least he was doing something America.

Also with some other bros, like Kyle Gallner, Sam Jaeger, Luke Grimes, and Jake McDorman.

And here is the now infamous fake baby scene!

Since them movie is based on a book based on lies, it is probably okay not calling this a biography. Right? Yeah, if we just examine this as a work of fiction, it becomes easier to judge and biases can be ignored.

Nice and simple. On its own, it is actually a pretty good war movie. It has the training, the motive, the childhood story. We have several different war plot lines with some moral ambiguity. It isn’t just about “getting the brown people!” and never even gets close to implying that. It examines PTSD and ways to work through it. It covers the whole spectrum.

I didn’t get super emotional near the end, especially since I knew kind of how it was going to end, but I can see how it tear jerks.

Cooper still looks like himself, but like, a fatter, slightly more buff version. He also has a killer Texan accent. I can say he definitely acts really well in this movie. I can understand why he is considered for Best Actor, but he has no chance of winning. At least three or four people I can think of who acted better, unfortunately only a couple of them also got nominated for that category.

Despite the controversy, despite the lies, Clint Eastwood makes a pretty good modern war movie with a character people might find relatable, that examines a lot of issues with war. It also isn’t inherently pro or anti war. Just pro soldier. That is a fine enough message.