Alvin’s Harmonious World of Opposites has a lot of things going for it right off the bat.

One: It has an amazing title. We immediately know who the main character is, and we know that there will be some fucked up shit in this movie.

Two: It is the first film I saw for WorldFest here in Houston, in an actual theater. I saw 16 of them before the festival started, but they were in chairs in my homes and at work and on my phone, not in theaters.

Three: The promo image for the movie (seen below) has a large assortment of pandas. So many goddamn pandas. Stuffed, cute, pandas. I actually have 5 stuffed panda toys in my house right now! I am not as obsessed as this main character, but I can certainly, and will happily, relate. 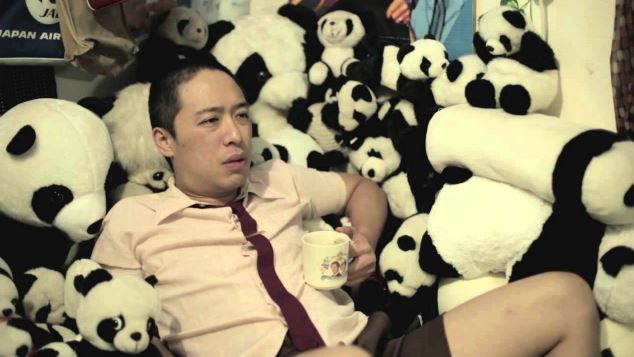 Alvin (Teik Kim Pok) is a bit agoraphobic, and he hasn’t left his small apartment in about 18 months. He talks with his friend (Nitin Vengurlekar) on Skype, his job is translating manuals into Japanese with a boss (Ailís Logan) who thinks he is at an office, and he orders everything online. His groceries, a shit ton of knickknacks, and of course panda themed items. He is a bit obsessed, but he doesn’t notice that of course.

Most of his face to face interaction is with his neighbor, Virginia (Vashti Hughes), a vile mouthed racist who blames everything on everyone else and cares not about her volume. Oh, and there is an attractive girl who lives below him, whom he has never talked to, but he has a peep hole in his floor into her bedroom. Erm.

Problem’s begin to really arise when Alvin finds some black substance leaking from the attic into his room. He has some neat freak tendencies, and it is entirely too gross, so he goes to check on it. And what he finds up in his attic he would have never guessed in a million, panda billion, years. 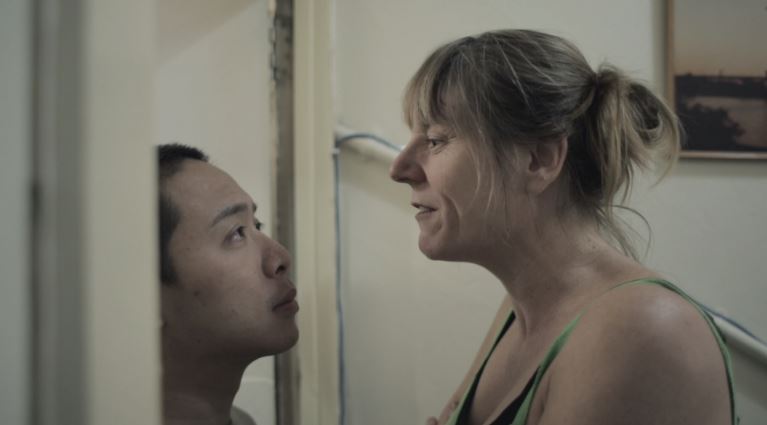 If he doesn’t watch it, his foul mouthed neighbor might accidentally eat him.

Alvin’s blahblah is a short film, only about 70 minutes with a handful of characters. Mostly just Alvin and his neighbor, along with the weird lady who lives in her attic. In case you are not ready for the film, the first scenes quickly give us the neighbor on a “cunt” fueled rant to wake up the viewer.

Personally, my favorite scenes were just Alvin hanging out in his Apartment, working, living his life. As advertised, the attic magical “adventure” that he went on was sure, yeah, quite weird. It had gibberish language and a lot of silence. It was bizarre and a complete tonal shift from the rest of the film.

With some thought, you can sort of figure out the purpose of his trip and what it means for his character, it is certainly not given to you on a platter. At the same time, I have no reason to suspect my own interpretation of events are correct at all, and I can easily be reading it wrong.

If this movie was entirely about a man who had slowly turned into a hoarder who never left his small room, I probably would have enjoyed it more. The attic makes the entire thing unique and stand out, but it is just so extreme. It was still quite well done given the subject matter and time.